Some years ago I saw a rom.com where the American heroine visits London for the first time. She lands at Heathrow and takes a cab to wherever she’s staying – somewhere fashionable with a SW postcode. She peers excitedly through the cab window as Buckingham Palace, the Houses of Parliament, St Paul’s Cathedral and Tower Bridge whizz by. I thought: where the hell is the cabbie going? Then the penny dropped: his circuitous route in the wrong direction had nothing to do with the real London; it was a fictitious ‘London’. 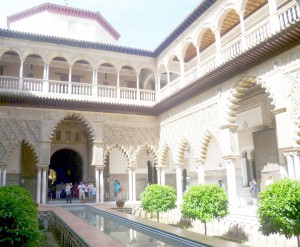 The Alcazar: the Spanish Royal family’s summer palace in Seville

I’d always felt much the same about the cigarette factory in Seville in Bizet’s opera Carmen. It must be fictitious. Bizet took his plot from a novella by Prosper Merimee and I doubted whether either of them had actually been to Spain. Merimée probably thought Seville sounded romantic and what was really important wasn’t the unlikely cigarette factory but the romantic toreador at the centre of the story.

The truth is rather different. Merimée (1803-1870) was told the story of Carmen by the Spanish Countess de Montijo (whose daughter married Louis-Napoléon and became the Empress Eugenie). 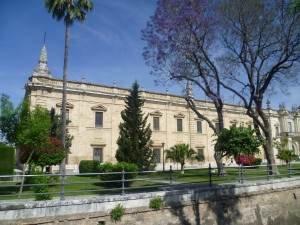 Royal Tobacco Factory, Seville;  note the moat in front of the fence.

And then I went to Seville. I was there seeing things Roman and Moorish but, as we walked past this opulent building, our guide threw out in passing: ‘Carmen’s Cigarette Factory.’ I was staggered; so it really existed? It could easily pass for a palace. And that, in a way, is what it was. King Fernando VI’s Royal Tobacco Factory was founded in 1728 and completed in 1771. It has classy finials on the roof; tiles depicting the Royal Lion; there is a deep moat, sentry boxes like pepper pots at each corner, and even a drawbridge. At the time, it was the second largest building in Spain – only El Escorial in Madrid was bigger. 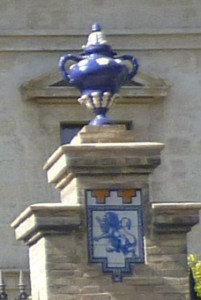 It was plainly a very important place, built to turn tobacco leaves (from Latin America) into snuff. At its height, the Royal Tobacco Factory had a workforce of 8000 men and was earning the king a fortune. 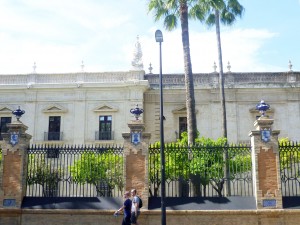 Royal Tobacco Factory, second only in size to El Escorial

By the 1830s, the Royal Tobacco Factory had switched to making cigars and the workforce comprised 6000 not particularly well-paid women. Inevitably, they smuggled out tobacco and sold it on the black market. The moat, the drawbridge and the soldiers were for real and the factory had its own prison. 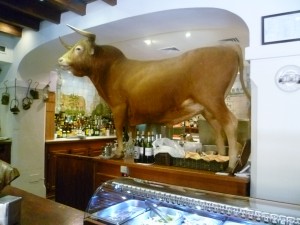 Suddenly, the plot of Carmen made sense. Don José is a corporal of dragoons and he’s there to stop the girls from smuggling tobacco. What’s more, Carmen is in cahoots with a gang of tobacco smugglers and she runs rings round Don José – detaching him from his girl-friend, Micaela, and then dumping him in favour of the bull-fighter, Escamillo. 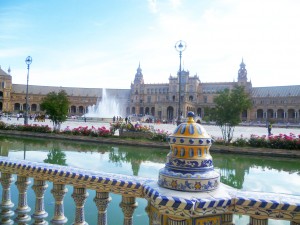 I’ve always loved the opera, and I shall enjoy it even more now I’ve seen the tobacco factory where Carmen worked with my own eyes. I’m ending this post with an extract from John Julius Norwich’s wonderful Christmas Crackers; it’s Act 1 from ‘a synopsis of Carmen, thoughtfully provided some years ago by the Paris Opera for the benefit of its English and American patrons:’

Act 1. Carmen is a cigar-makeress from a tabago factory who loves with Don José of the mounting guard. Carmen takes a flower from her corsets and lances it to Don José (Duet: ‘Talk me of my mother’). There is a noise inside the tabago factory and the revolting cigar-makeresses bursts into the stage. Carmen is arrested and Don José is ordered to mounting guard her but Carmen subduces him and he lets her escape.

4 thoughts on “Carmen and the Seville Cigarette Factory”