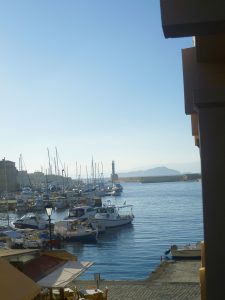 Right from its early Minoan beginnings, Chania was an important place. It has two natural harbours and, later in its history, first the Venetians and then the Ottomans, valued it for its strategic importance. 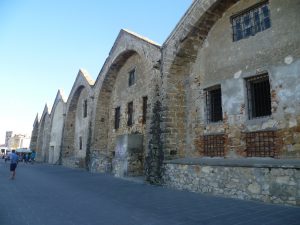 But we were in Crete to visit places which are well off the tourist track, and we spent some time up in the White Mountains. For invaders, it was easier to stick to the coast. 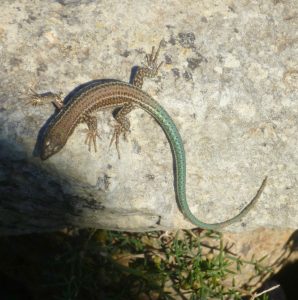 A lizard basks in the autumn sun. I can’t work out which colour it’s decided to be.

Up in the mountains you can almost always see the sea – and who may be approaching. Nowadays, there is a modern road running along the precipitous edge, but you can still see the original narrow zig-zag roads, fit only for mules, which were the only roads there were until recently. Nobody in their right minds would venture up into the mountains unless they either knew it like the back of their hand, or were desperate. 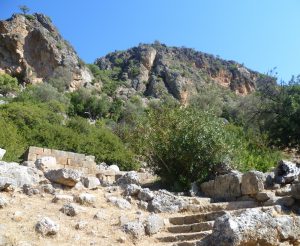 Lissos: going up to Aesclepius’s temple; note the troglodyte dwellings used by fleeing Christians in the Ottoman period in the cliff face behind.

Lissos, on the south coast, is not easily reached, even today. You can see at once why the remote troglodyte dwellings carved into the rock by persecuted Christians were never discovered by the invading 17th century Ottomans. 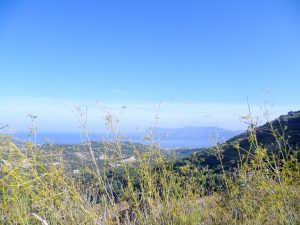 Polyrhenia, in the White Mountains: view towards the sea through anise seedheads

Polyrhenia, which dates back to the Bronze Age, is strategically located and, from its precipitously-located acropolis, a look-out man could see both the Cretan Sea to the north and the Libyan Sea to the south. The views are tremendous.

But, as anyone who tries to photograph a spectacular view discovers, it’s one thing to admire it, and quite another to photograph it successfully. For that you need something in the foreground to give a sense of distance and perspective. In autumn, there are some wonderfully decorative seed heads which do the job perfectly, like the anise seed heads above. (They scent the air, too.) 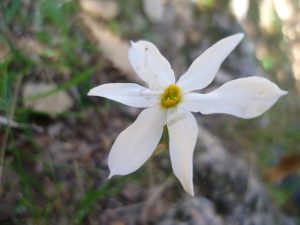 I love Mediterranean flowers and, up in the hills, there are flowers blooming, even in October, like this beautiful miniature narcissus growing in between the steep narrow rock-cut entrances to the large Minoan circular stone-built ‘tholos’ tombs at Armeni. I’d always assumednarcissi were spring flowers. They are only about three inches high and you have to kneel to catch the strong but sweet scent – but it’s worth it. 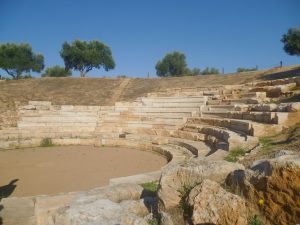 The theatre at Aptera. You can just see the circular stone in the centre

Aptera, now a picturesque ruin, was once a flourishing Greek city, and destroyed by an earthquake in the 7th century A.D. Discovering its theatre was a joy. There is an unobtrusive circular stone set in the middle of the stage which enhances the voice of anyone who speaks while standing on it. The sound actually vibrates through you. It’s a curious tingling sensation and, while standing on the exact spot, the acoustic is absolutely perfect on all sides. You don’t have to shout; simply speak and your voice will be heard anywhere in the theatre. 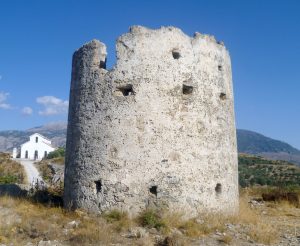 Elyros is another ‘lost’ city which was important in Greek and Roman times. There are plenty of ruins: remains of a Roman aqueduct, walls, water reservoirs and so on, but I particularly liked this, much later, windmill. I thought it had a Rapunzel air about it. 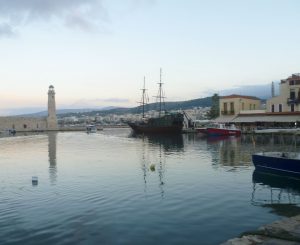 Having stayed at Chania for a few days, we moved to Rethymnon, another important Greek and Roman city. It was conquered by the Venetians in 1229, and later by the Ottomans and it, too, has a splendid harbour. The rigged ship is, alas, not original, it is a modern ‘pirate ship’ (pirates were a scourge for much of Crete’s history) and you can hire it for parties. 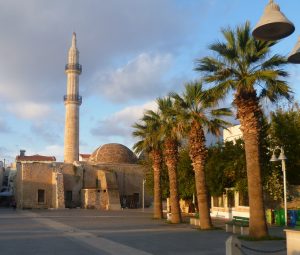 Rethymnon: mosque and minaret at sunset

The relics of the Ottoman two hundred and fifty year occupation are all around, especially in places like Chania and Rethymnon. The mosque above is now an education centre. And there are a number of Ottoman fountains, merchants’ houses and arched doorways intricately decorated with fruit and flowers which remain as a testament to the skill and beauty of Ottoman architecture. 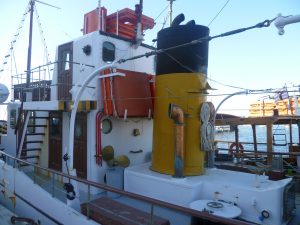 I’m ending with this boat which caught my fancy. It has a faintly Art Deco look about it – crossed with the sort of toy boat a child might float in the bath. I liked the shapes it made. I hope you enjoy it, too.

4 thoughts on “Crete in October”