Recently, I saw the Lost Treasures of Strawberry Hill exhibition at that extraordinary Gothic extravaganza, Strawberry Hill, the summer villa of the author, letter writer, and passionate collector of the Fine Arts, Horace Walpole (1717-1797). Horace was the son of the politician and statesman, Sir Robert Walpole, and rich enough to do what he wanted: travel in Italy, buy art and antiques, and live the life of a cultivated man of leisure. His tastes were unusual and original – and he had the money to indulge himself. 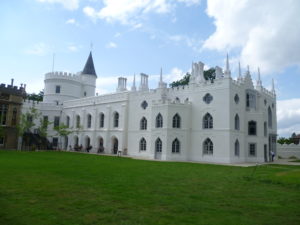 Back in 1749, he had bought Chopp’d Straw Hall in Twickenham, a higgledy-piggledy, ‘gingerbread’ house whose quirkiness he wanted to retain. Palladian symmetry did not interest him; what he wanted was mystery and surprise. He set about creating a ‘Gothick’ building, full of irregularities and filled with ‘gloomth’, a word he coined for the Gothic-like effect he sought. 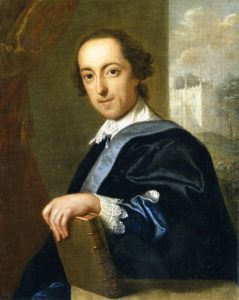 Walpole took his inspiration from a variety of places. For example, the staircase going up from the hall to the first floor, is based on the library staircase in Rouen Cathedral; the pierced Gothic arches in the library echo the side door of the choir in old St Paul’s. The chimney piece in the Holbein Chamber was inspired by the tomb of Archbishop Warham in Canterbury Cathedral. You can see that the Gothic arch over what is now the grate is where the Archbishop’s coffin would have rested, whilst the rectangular structure bordered by Gothic tracery immediately above, would have held the archbishop’s effigy. A three storey tower, with empty niches for statues of saints, stood on either side of the chimney piece. It’s a very neat adaptation, with more than a touch of chutzpah.

However, times change, and, in 1842, all the contents of Strawberry Hill were auctioned off and dispersed in all directions. Eventually, in 2007, the Strawberry Hill Trust took over and, in 2010, after years of neglect, the house was restored to its original Gothic splendour at a cost of nine million pounds and I visited it back in 2011 – but more of that in a moment. 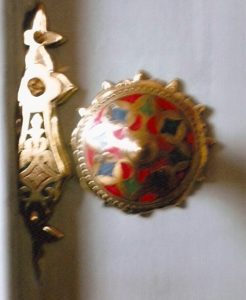 Even the door furniture is beautifully designed

Much more recently, the Strawberry Hill Trust tracked down some 400 of the 4000 original objects sold and persuaded their owners to lend them for the Lost Treasures of Strawberry Hill exhibition which restored them in their original positions in the house, and I returned to Strawberry House to see it.

Unfortunately, photography was not allowed inside the house during the exhibition, so I am using the photographs I took when I visited the house in 2011, when the rooms were, of course, empty. Actually, it’s probably just as well, because the curators also recreated the ‘gloomth’ Walpole wanted and the rooms were all bathed in a sort of sepulchral twilight. I heard a number of visitors saying plaintively, ‘Where are we?’ and trying to read the exhibition’s booklet by the uncertain light from the stained glass windows. 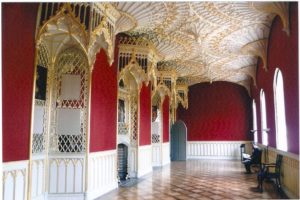 Back in 2011, the pièce de résistance for me was the Gallery with its crimson damask walls and splendid ceiling, a miracle of papier-maché fan vaulting in white with gold leaf which almost blinds the eye. When I first saw the white and gold fan vaulting of the ceiling – based on Henry VII’s chapel in Westminster Abbey – I actually gasped. Everything had been specially designed to add to the room’s ambience. I just loved the brass door knobs with enamel inlay, for example.

During the exhibition, however, the Gallery looked quite different. The pictures had been returned to their original places and the room looked smaller, an effect enhanced by the long red benches with arms in between the arches which made it look narrower, too. 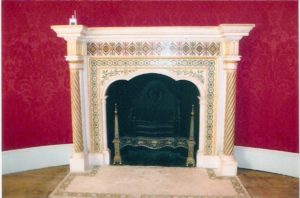 Fireplace in the Round Drawing Room

In 2011, I was very taken by the fireplace in the Round Drawing Room with its beautiful scagliola inlay – plaster work of Italian origin designed to imitate different kinds of stone. It was good to see it again.

Seeing the house during the exhibition with many of the pictures and ornaments returned, one could get a better idea of how it must have struck its first visitors. Somehow, it managed to be both over the top and elegant but in a slightly decadent way. 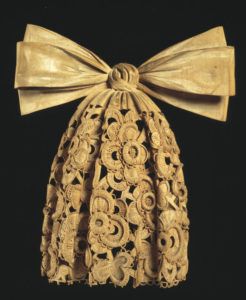 Cravat in limewood by Grinling Gibbons, courtesy of the Victoria & Albert Museum

The contents shown in the exhibition were as extraordinary as the house itself. Take this limewood cravat by the wood-carver Grinling Gibbons (1648-1720).Walpole actually wore it. In one of his chatty letters to his friend, George Montagu, in 1769, he wrote: At the gates of the castle I received (his French visitors) dressed in the cravat of Gibbons’ carving, and a pair of gloves embroidered up to the elbows that had belonged to James I.

The limewood cravat must have been excruciatingly uncomfortable to wear. Both the cravat and James I’s gloves were returned for the exhibition. Heaven knows what his guests thought of their host’s costume. 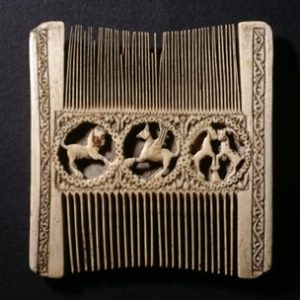 Walpole was obviously interested in collecting objects which had once belonged to someone important, like Queen Bertha’s comb. Bertha was the Christian daughter of King Haribert of the Franks who married King Ethelbert of Kent; it was through her that St Augustine came to Canterbury and converted Ethelbert, and Kent, to Christianity.

One has to ask, was the comb, borrowed from the British Museum, really Queen Bertha’s? It is obviously a high status object, made of ivory and intricately carved, but it has been dated to the 12th century, and Bertha died sometime before 616 AD.

However, there was also Cardinal Wolsey’s red felt and silk hat, borrowed from Christ Church, Oxford, and once belonging to Horace Walpole, also on display. It looked to me suspiciously pristine, considering that it was supposed to be well over 400 years old. 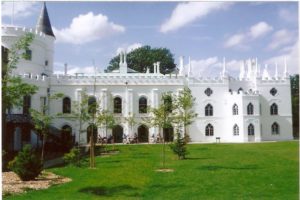 Georgette Heyer fans will remember that in The Convenient Marriage, Horace Walpole is the god-father of the heroine, Horatia Winwood. Horatia herself is not particularly keen to visit Strawberry Hill in case she’s expected to ‘fondle his horrid little dog, Rosette, who was odiously spoilt, and yapped at one’s heels.’

Horace Walpole also wrote the first Gothic novel, The Castle of Otranto, in 1765. It was an immediate success and has been in print ever since. Walpole himself said of it, ‘I gave rein to my imagination; visions and passion choked me.’ The story opens with a huge, black-plumed helmet crashing down and killing Conrad, son of the tyrant, Manfred of Otranto, on his wedding day. Not unnaturally, the bride, Isabella, is terrified and attempts a mid-night escape through a gloomy vault. The story is full of ghosts, a statue which pours blood, prophecies, torments and a spooky forest cave. All splendid stuff and, looking round his house, it was plain that Walpole’s imagination didn’t stop there. 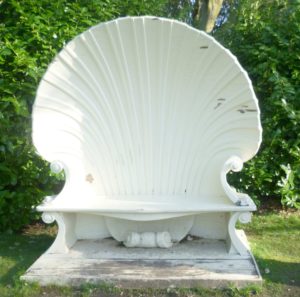 Now is a good time to visit Strawberry Hill because, now the Lost Treasures of Strawberry Hill exhibition has closed, some of the objects will remain, like the portraits, digitally reproduced for the exhibition. And the elaborate gold-leafed replica ornamentation over the fireplace in the library will stay – the original, now elsewhere, was too fragile to travel. In the garden, there is a replica of Walpole’s original scallop shell seat.

If you want to be inspired and refreshed (they have an excellent tea- room, too!), look no further. Strawberry Hill is the place for you. www.strawberryhillhouse.org.uk

All photographs, unless otherwise credited, are by Elizabeth Hawksley