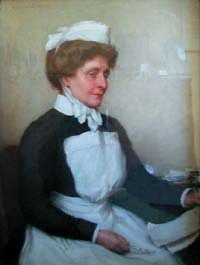 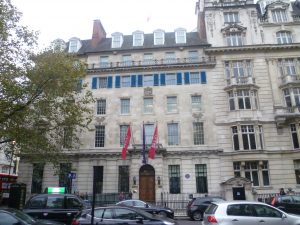 Sarah saw that nurses’ training urgently needed to be co-ordinated, with proper registration, and improved status and working conditions; so she fought for a College of Nursing, forging alliances with various influential politicians. Success was not guaranteed. The idea of nurses having a college of their own and being viewed as professionals, instead of contenting themselves with being ‘ministering angels’, was unimaginable for many. Nursing for women tended to be viewed as part of their domestic duties, not as a separate, paid, profession. In 1916 women did not have the vote, so all Sarah could do was lobby; and lobby she did. And she won. (It is cheering to know that she was made a Dame in 1919 in recognition of her War services. And quite right, too.) 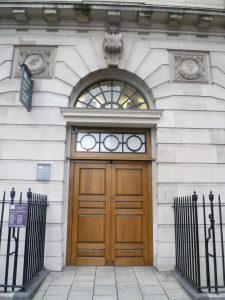 The elegant door of the original entrance in Henrietta Place

The new College of Nursing originally had thirty-four members, but by 1918, the membership was over 13,000. Their first home was in Henrietta Place but, in 1925, they moved to 20 Cavendish Square  behind Oxford Street, which was bought and then donated to the College by Lady Cowdray, an enthusiastic (and wealthy) supporter. 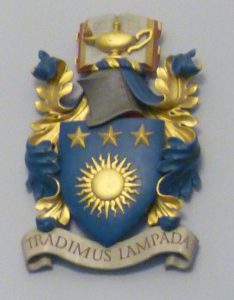 The RCN coat of arms: Tradimus Lampada: We Hand on the Torch

No. 20 had been built as a substantial town house in 1729, possibly by James Gibbs, for the wealthy merchant, Francis Shepherd, M.P. Later, it became the residence of the Prime Minister, H. H. Asquith. In 1930, the building was re-fronted and incorporated by the architect Edwin Cooper into the original College of Nursing in Henrietta Place. It was opened by Queen Mary in 1926, who, apparently, enjoyed taking tea at the College – she particularly liked the cakes! 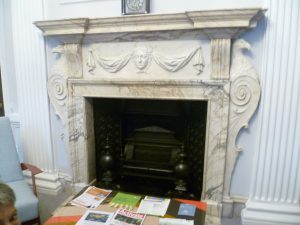 The 18th century core of the building is still there, and there is a splendid marble mantelpiece with the College of Nursing’s blue and gold coat of arms above it bearing the motto Trademus Lampada. The lamp at the top is a reference to Florence Nightingale’s nickname, ‘The Lady with the Lamp’.

There is also a cantilevered staircase with suitably sombre classical wall paintings. 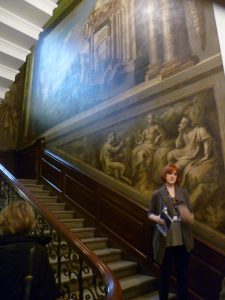 Our guide, Frances Reed, by the 18th century staircase

When you get up to the first floor corridor, however, you can see through the window how much the building has been altered. The original eighteenth century house is still there but now dwarfed by later 20th century alterations to fit it for its new purpose. There is an outside ‘Winter Garden’ where the nurses have barbeques, though not, one hopes, in winter. 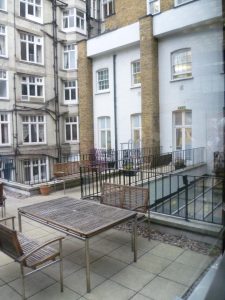 I liked the library with its Nursing History Room, and was intrigued by the post war information books in a glass case, with subjects ranging from Head Louse Infestation, and Woman’s Place (obviously firmly in the home) with a black and white photo of a woman holding her baby aloft, to Manhood: an explanation of sex for young men (what on earth does it say?) to a battered original proof of the Beveridge report. 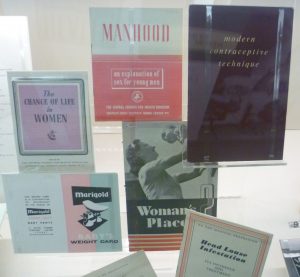 There is also a small shelf of fiction, including a copy of my friend Jean Fullerton’s Fetch Nurse Connie, which has a post war East End community nursing background. Jean is an East Ender herself and was a nurse, and it’s great that her book is seen as worthy of inclusion. 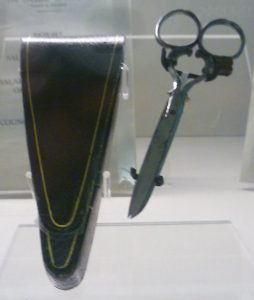 There is a small museum, too. I was particularly interested to see Mary Newbery’s scissors with their leather case. Beside it, there is a card which reads: These belonged to Mary Newbery (née Fairchild), a foundling, left in the front garden of a house in Green Lanes, North London. Brought up by the family there, she went on to become trained as a nurse at the Prince of Wales General Hospital, London from 1921-24.

What an opening for a story! 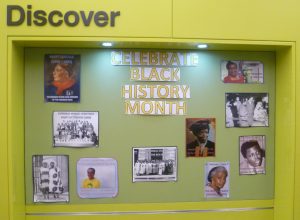 This year is the Royal College of Nursing’s centenary (it acquired the ‘Royal’ in 1947) and there are various cases to celebrate how far the R.C.N. has come, including this one celebrating Black History Month. 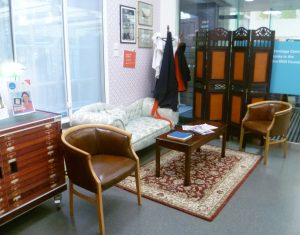 A re-creation of an early 20th century RCN corner

I was very taken with the re-creation of an early 20th century corner from the small exhibition ‘Celebrating 100 years of the RCN’ with its folding Edwardian screen, coat and hat stand with nurses’ cloaks hanging from it, and a chaise longue. 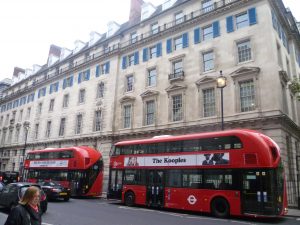 Henrietta Place: the original site of the Royal College of Nursing – and terminus for the 159 bus!

The RCN library and museum is open to the public, Monday-Friday 9am – 7pm, Saturday, 9am – 5pm, via the entrance in Henrietta Place, and there is a nice café. There are also free tours. It’s best to check in advance: www.rcn.org.uk/whatson

It’s a fascinating place and I thoroughly enjoyed my visit.

All photos by Elizabeth Hawksley, apart from the portrait of Sarah Swift by H. J. Draper, courtesy of the DNB.

6 thoughts on “Exploring London: Sarah Swift and the Royal College of Nursing”