Frederick, Prince of Wales (1707-1751), eldest son and heir of King George II, true to Hanoverian form, couldn’t stand his father. Unlike George II, who was something of a Philistine, Frederick loved music and the arts. So, naturally, when he commissioned a royal barge from the architect and painter, William Kent, not only was it designed in the newly-fashionable Rococo style, ornately carved and gilded with 24-carat gold leaf, it was faster and more eye-catchingly splendid than any barge his father owned. It was launched in 1732 and, as you can see, it certainly makes a statement. Note the huge Royal Standard. 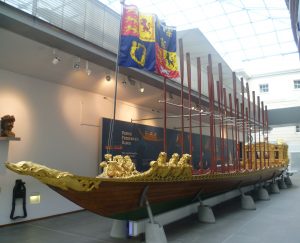 London’s roads in the 18th century were in an appalling state, even those near the Houses of Parliament. In 1759, for example, ‘faggots were thrown into the ruts on the day on which the king went to Parliament to render the passage of the coach more easy.’ It was easier, quicker and safer to go by boat and, throughout the 18th century, the Thames was London’s main thoroughfare.

Most people used one of the small Thames wherries, a sort of water taxi, to get across London, and Frederick’s barge was built to the same design, but larger, being nearly 20 metres long. It was rowed by twenty-one oarsmen (note the upright red oars) and steered by a barge master. It also had an ornate cabin for Frederick and his entourage. 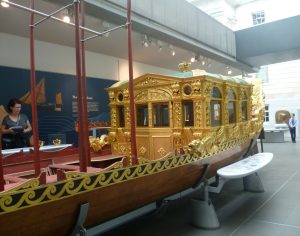 Towards the stern of the barge, showing the cabin

What I particularly like about the barge is the iconography of the decoration; every bit of ornamentation means something, it’s there to demonstrate, not only Prince Frederick’s royal rank but also British maritime status and importance.

Running along the side of the ship is a Vitruvian scroll or wave, a Classical design often used as a band of decoration. Behind it is the elaborately ornamented cabin, which has a number of Classical elements, for example, the pediment above the arched double door, and the pilasters (flat rectangular columns which project slightly). All this says, ‘The owner of this barge is a well-educated and cultured man – unlike my father.’ 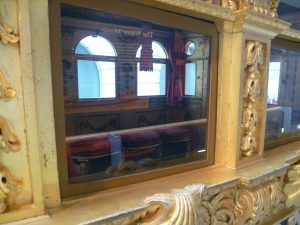 The cabin itself has comfortable upholstered seats covered with faded red velvet, a carpet and a painted ceiling. There are windows on all four sides and double doors front and back. It would be a good place to retreat to if it rained, and there are curtains to draw if you need privacy.

The front of the barge has an impressive prow with a stylized dolphin covered in gold leaf. The dolphin is based on a Roman design which emphasizes the barge’s Classical pedigree, much used by Rococo architects, such as William Kent. 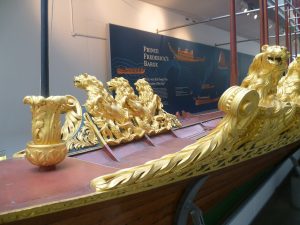 Moving towards the stern there are six sea lions, three rearing up on each side – these are heraldic sea lions, half lion and half fish, which signify that the heraldic lions from the Royal Coat of Arms are now in a marine environment. (The song Rule Britannia, Britannia, rule the waves! dates from this time.) The sea lions are not to be confused with sea-lions one might see in the zoo. I like the way that the scroll decoration, immediately in front of the sea lions, sweeps down in a twisted wave. 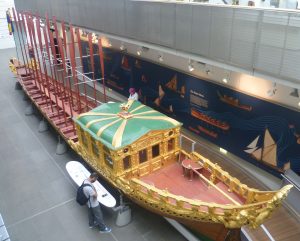 Looking down on the Royal Barge from above

This photo shows the cabin from the top. William Kent was not afraid of using bright colours: the vivid green of the cabin roof with its bright yellow bands, and the crown on a scarlet and gold cushion in the middle; the red of the upright oars; and the gleam of the gilding.

There is plenty of space for Prince Frederick to stand on the stern deck and wave to the crowds. His progress is sure to be noticed – the barge is hardly unobtrusive. 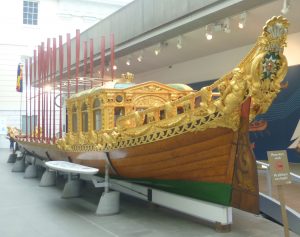 The stern of the barge from ground floor level

There are more examples of royal iconography to look at from floor level. The back of the stern rears up with the three ostrich feathers badge and underneath the motto Ich Dien (I serve) – the emblem of Princes of Wales since the 14th century. It is enclosed within a scallop shell, the symbol of both Venus, the goddess of love, and Neptune, the god of the sea (Frederick liked women and Britain ruled the waves). Underneath is the Order of the Garter, the highest order of chivalry in England. It bears the motto: Honi Soit Qui Mal Y Pense (Evil be to him who evil thinks).

Supporting all this are nereids (we can only see one), sea nymphs, in attendance on Neptune. And, further down, above the Vitruvian wave, there are swags of oak leaves and acorns. In Roman times, these were connected with the cult of Jupiter, king of the gods, and, in the 18th century, they were also a symbol of British sea power. (Hearts of oak are our ships, Jolly tars are our men! as a contemporary song had it.) 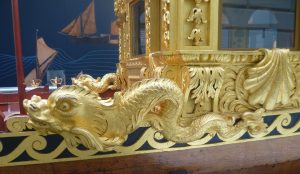 I’m ending with this splendid dolphin riding a Vitruvian wave. Prince Frederick’s barge is now in the National Maritime Museum, Greenwich, and it’s well worth a visit. Entry is free.