Last October, I looked at some articles from the monthly illustrated Strand Magazine which was launched in 1896: Child Acrobats and Stage Dancers; Educating the Blind; and The Battersea Dogs’ Home, 1891, and wrote posts about them.

A couple of days ago, I discovered a further copy of the Strand Magazine. It’s not in a good state; it lacks the back and spine covers and the last few pages have come unstuck – but it is complete. And it contains an extraordinary article: ‘Animal Furniture’ 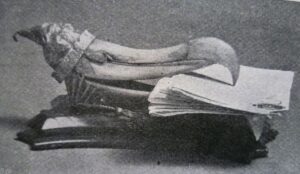 The article, Animal Furniture, is by William G. Fitzgerald. Fitzgerald obviously knew how to grab an audience: his subject is various big (and not so big) game trophies – tiger, bear, elephant etc. whose dead bodies have been turned into useful pieces of furniture.

It opens: Fancy lounging in the entrance hall of a country mansion and throwing your hat on the horn of a rhinoceros, which identical horn was once half-buried in the writhing body of your host! 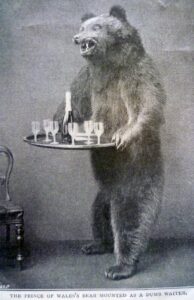 The Prince of Wales’s bear mounted as a dumb waiter

Having grabbed your attention, he continues: I also recall a titled lady who occasionally wears a necklace of gold-mounted bear’s claws, which correspond exactly with a number of frightful-looking scars on her noble husband’s back. (You must agree it’s a terrific opening.)

The photograph above is of a Russian bear which once attacked the future King Edward VII – who retaliated with deadly effect. The bear became a dumb waiter in the smoking-room at Marlborough House, the London home of The Prince of Wales and his wife, Princess Alexandra of Denmark. I wonder what happened to it – it certainly isn’t there now.

I’ve seen a number of stuffed bears myself – often holding trays for visiting cards. But things didn’t stop there. How about this? 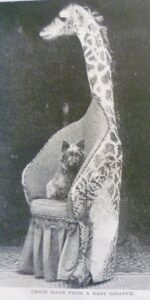 A chair made from a stuffed baby giraffe

This giraffe, together with its mother, was shot by a famous game-hunter, Mr J. Gardiner Muir, near the Kiboko River in British East Africa. If you look carefully, you can see that the giraffe’s legs form both the sloping arms of the chair and its front legs. We can’t see what happens at the back. We are also told that the little dog sitting in the chair is Punch, the owner’s Scotch terrier. It’s not clear whether the dog is stuffed or not. (If it isn’t now, it probably will be.) 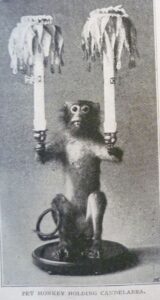 According to Mr Fitzgerald, ‘a certain lady’s pet monkey died, and, although her grief was great, she resolved to have her dead darling turned into something useful as well as ornamental.’ The monkey became a candle holder ‘grasping in its little fists the polished brass sconces…’

Apparently, stuffed monkeys holding lamps for all sorts of places, (billiard rooms being particularly popular) became the ‘in’ thing which sent the price of monkeys skyrocketing – so much so that dead monkeys from London zoo were eagerly sought after.

Fashions move on, as Fashion does, and parrots and cockatoos in their turn became so popular as light holders that, ‘A Bond Street shop actually had to keep a stock of live parrots and cockatoos so that his aristocratic customers could select one for a swinging-lamp. After selection the doomed bird was sent to the taxidermist, killed immediately, and then mounted in the style chosen.’

Usually, parrots swung in brass hoops and carried the lamps on their backs, whilst the cockatoos were ‘chained’ to a perch. 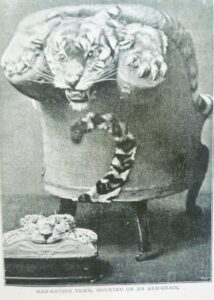 Man-eating Tiger Mounted on an Armchair.

The tiger above also comes with a story. It was a man-eater much feared by the local villagers in Travancore, India. It was eventually killed by ‘a gentleman in the Indian Civil Service’ who had the much-feared tiger turned into an armchair. The seat is covered with its beautifully-marked skin and it looks as though the tiger is coiled round the chair with its tail curved underneath the chair and curling up the back in the very act of springing on its prey – possibly you. 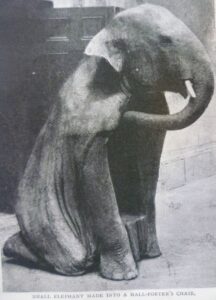 A Young Ceylon Elephant is turned into a Hall-porter’s Chair.

Mr Fitzgerald ends his article by recalling the huge variety of stuffed animals he has seen: eggs of emus and ostriches as basins and jugs; hares’ heads as matchboxes; coiling snakes as umbrella stands; an ostrich leg door stop; wild asses’ ears as tobacco pouches; flying opossums holding card trays; panthers hugging satin-lined waste-paper baskets and the albatross’s beak paper clip shown at the beginning of this post – and that’s just a selection. 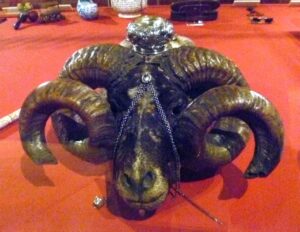 Regimental mascots frequently end up as snuff boxes or inkwells and the like – see the ram’s head snuffbox from the Wellcome Collection in London and I’ve seen a horse’s hoof from the battle of Waterloo turned into an inkwell in the Household Cavalry Museum. 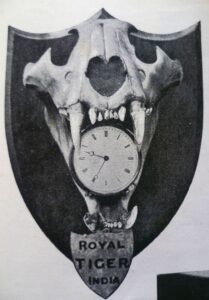 These hybrid furniture/animal objects were once a familiar sights in many homes and hotels in a way that now shocks us. Do we have a modern equivalent, I wonder – what about those freeze-dried dead pets. Do they count?