A.D. 71, and Marcus Didius Falco, Lindsey Davis’s intrepid sleuth in The Iron Hand of Mars, is in Germania Inferior on a mission from the Emperor Vespasian. Reluctantly, he goes to Vetera, once a huge double fort on the River Rhine, now bearing all the hallmarks of a savage attack, with broken siege engines, toppled platforms and clear evidence of destruction by fire. A few years before, it had been almost totally destroyed by the Batavian uprising, headed by rebel chief, Civilis, once Rome’s ally. It is only just recovering. 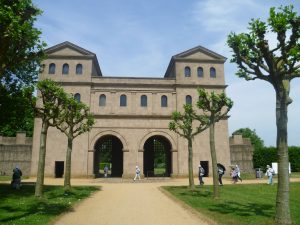 Nowadays, we know it as Xanten. The Emperor Trajan re-founded Vetera thirty years later under a new name, Colonia Ulpia Traiana, and today, after over a century of archaeological excavation, large sections have been rebuilt, mainly on their original foundations, in what is now Xanten Archaeological Park. I visited it recently and, naturally, I took my copy of Lindsey Davis’s The Iron Hand of Mars with me. (Very sensibly, it was on our book list.) 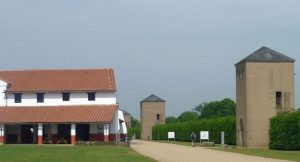 The auberge and a section of ‘wall’ with two watch towers

Colonia Ulpia Traiana, a.k.a. Vetera is huge. The section above shows the auberge where, later, we had a ‘Roman’ lunch, and a couple of watch towers. You can gage the scale of the place by the man walking past the nearest notice board between the watch towers. (He’s very faint but he’s just visible.) 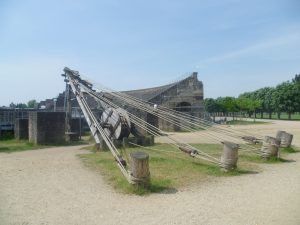 I was fascinated by the replicas of Roman building equipment. Here is the crane they would have used to build its massive walls. The stone blocks were raised by a winch using manpower. The stone itself came 100 kilometres up the Rhine and was hauled on site by teams of oxen. 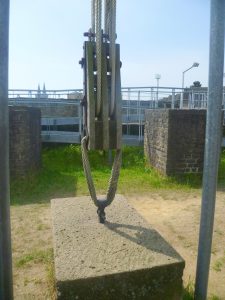 This is the hoist for lifting the stones – it uses a split pin lewis which is a sort of grapnel, inserted into the stone via a specially prepared hole. The weight of the stone when raised causes the lever-like arms of the lewis pin to open and hold the stone. (I assure you that, when it was explained, I understood perfectly!) I hope I’ve been able to give you some idea of how it works. It’s really ingenious. 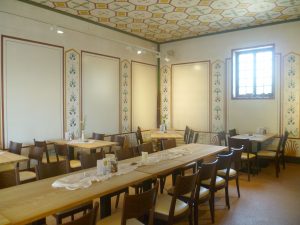 The white dining room in the auberge; note the authentic décor

We had a simple Roman lunch in the auberge (no fatted dormice for us). It was basically a green salad (without tomatoes, of course) with hard boiled eggs, and Roman bread. The Roman bread didn’t contain yeast so the flour was softened with milk and butter, and occasionally fermented grape juice which contains a small amount of natural yeast. I can’t say that I was very impressed by the results; but it was 35C and extremely hot and I didn’t feel much like eating. Fortunately, we weren’t expected to lie on couches.

Still, we did a lot better than poor Falco who arrived at dusk with his motley band of raw recruits, their tough centurion and a tribune. They weren’t allowed to enter Vetera but were billeted in a wooden hutment on the quayside. Jupiter knows what they got to eat; possibly just some pulmentum, a wheat flour porridge, which would have been pretty basic. 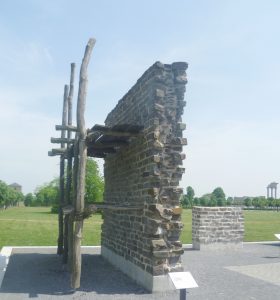 After lunch, we saw some Roman scaffolding. I have seen scaffolding like this in Egypt and elsewhere, and it works perfectly well, providing it’s secured properly, as this example was. 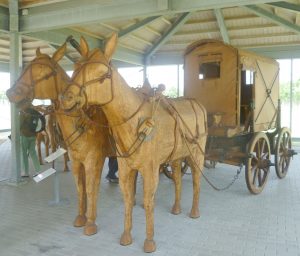 A pair of mules with a Roman wagon

Next, we looked at Roman transport. A modern building contained various forms of transport with some delightful wooden horses, mules and oxen and reconstructed wagons and carts. I particularly liked these mules harnessed to a wagon. Falco’s girl-friend, Helena Justina’s mode of travel to Germania Inferior would have been in something similar but with horses and, one hopes, a well-sprung wagon with comfy cushions. 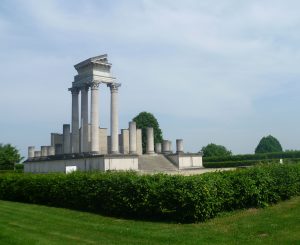 The partially-reconstructed temple of Jupiter

My last photo is of the temple of Jupiter. Only a small section has been reconstructed but enough to give the visitor an idea of how impressive the temple must once have been. Work at the Archaeological Park is always ‘in progress’ and new buildings, like a fine innovative cover building to display the Roman baths, are going up all the time.

The whole visit was a real eye opener for me and I thoroughly enjoyed it. I re-read The Iron Hand of Mars with a new understanding.