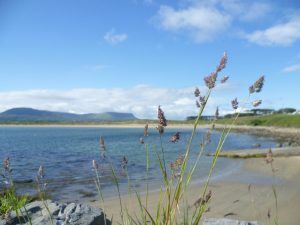 It was a beautiful day and, for once, my photos turned out as I wanted. In the photograph above, I am standing among the sea dunes at Mullaghmore. If I look straight across the water, I can see the unmistakable outline of Benbulben, the flat topped mountain beloved of the poet W. B. Yeats. 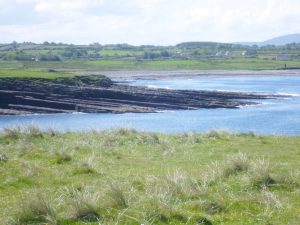 Looking in the opposite direction are the sand dunes of Streedagh (pronounced STREE-da, to rhyme with ‘Freda’) overlooking Donegal Bay. Our walk started at the Armada monument, a bronze plaque which showed the route the Spanish Armada ships had taken down the west coast of Ireland in their desperate attempt to get back to Spain in 1588. Three of them: the Lavia, the Juliana, and the Santa Maria de Vison, foundered here after several ferocious storms had driven them onto the rocks. They still rest in eight metres of water off shore, and recent marine excavations have brought up a number of guns and other artefacts.

Auriel also told us the story of Francisco de Cuellar, a rare survivor of the Armada shipwrecks who wrote a detailed eyewitness account of his adventures and the struggle he had to survive and get back to Spain. 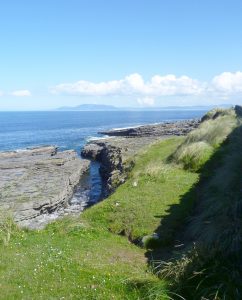 Streedagh, looking across Donegal Bay to the mountains of Northern Ireland

Whichever way you look, the scenery is dramatic. The carboniferous limestone, some 350 million years old, has been carved by ice sheets during the last Ice Age into the lethally sharp sheets of rock we see along the coast today. Woe betide any ship trying to reach a safe haven during a storm, here. 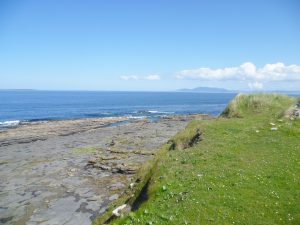 In places the sheets of limestone look almost like paving stones. 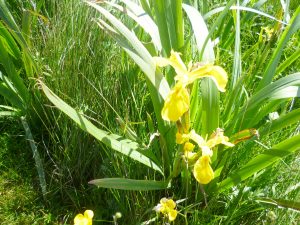 Yellow wild iris, these grow in profusion and make vivid yellow clumps amid the machair

What we were walking across was machair grassland, where grasses have bound the dunes together to create a diverse habitat, full of wild flowers, birds and butterflies, many of them rare. We could hear larks, for example, and occasionally see them high above us, mere dots in the sky, singing. 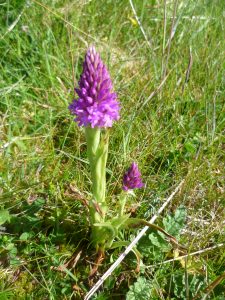 Pyramidal orchid. Once I knew what they were, I saw them everywhere.

There were orchids, too, like the pyramidal orchid, whose bright cyclamen-coloured flowers stood up like candles amid the dunes. There were plenty of more common flowers, too, like the yellow bird’s foot trefoil, St John’s wort and cat’s ear – which looks rather like a country cousin of the dandelion. It’s interesting how many of the flowers are yellow. 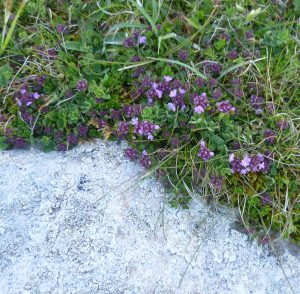 Wild thyme, which scents the air as you walk past

But pink and purple flowers flourish, too; I saw both bell and ling heathers, and some wonderfully vivid purple wild thyme. 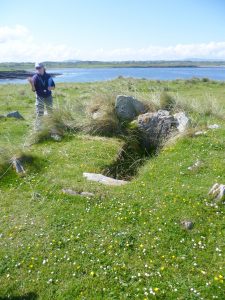 Auriel telling us about the wedge-shaped tomb

Auriel stopped to tell us about the 5000 year old wedge-shaped tomb. It appeared in the 1840s after a particularly fierce storm. The storm stripped off the sand and revealed a chamber constructed with limestone slabs with a passage leading up to it. The tomb is surrounded by a circle of boulders about 11 metres in diameter. But, as you can see, the tomb has now virtually disappeared again.

Its local name was the Tomb of the Wolfhound. But no wolf hound remains have been found here – at least so far. It still awaits a proper excavation. 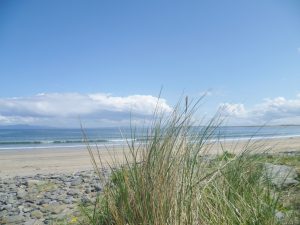 Streedagh beach: the site where the three Spanish Armada ships foundered. The stones you can see are created from millions of fossilised sea creatures

Eventually, we found that we had covered three-quarters of a circle and reached the stretch of Streedagh beach where the three Spanish ships still lie eight meters down. We don’t know exactly where the ships are, but, the timber wreckage found suggests that the organic remains are in a good state of preservation. Their main danger is from storm damage, and a salvage operation was launched in 2015 to rescue what could be found. At least a dozen guns have been recovered, so far. 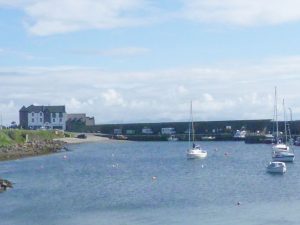 But Mullaghmore harbour also has a tragic 20th century story to tell. It was here in August 1979, that the Provisional IRA planted a bomb on a boat which belonged to Lord Mountbatten, Admiral of the Fleet, and the last Viceroy of India. Lord Mountbatten’s country retreat was at the nearby Cassiebawn Castle. The bomb killed Lord Mountbatten, Lady Brabourne, his 14-year-old grandson, Nicholas Knatchbull, and a local teenager, Paul Maxwell.

Auriel told us that the locals were outraged by the massacre; not only were locals killed and injured, two children were among the dead, and Lord Mountbatten himself was a popular and much-respected man.

Looking through the photos has brought the pleasures of that walk back: of course, it’s not as good as being able to go on a sea cliff walk for real – but it’s the next best thing!

4 thoughts on “Ireland: A Walk on the Wild Side”