I never thought I’d find myself loving a building site but this one is special. 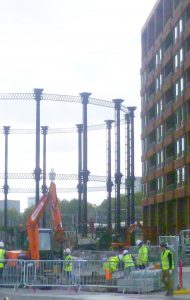 Gasholder, men in hard hats and yellow jackets, machinery, Victorian warehouse: it must be the new Kings’ Cross development!

In the 19th century, the area around King’s Cross station was a hive of industry with barges bringing goods from the Port of London up the Regent’s Canal for storage in the huge warehouses there, like the Granary Building which stored grain. But by the 1970s, the area had become a wasteland, full of decrepit empty buildings, and notorious for drugs and prostitution.

Not any more. It is being totally transformed and this post is a whistle-stop tour of what’s going on. Grab your hard hats and let me show you round. 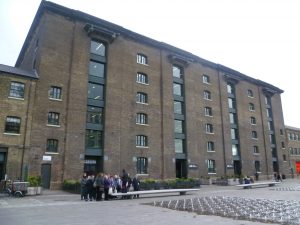 Usually, redevelopment means the total destruction of whatever was there before and the construction of new buildings built, one feels, to maximize profit and to hell with how it looks and works. This development has a very different feel. Many of the old industrial warehouses have been inventively re-designed for new uses. The modern buildings are unashamedly 21st century but they also respect the historic heritage. The whole place feels friendly and welcoming. 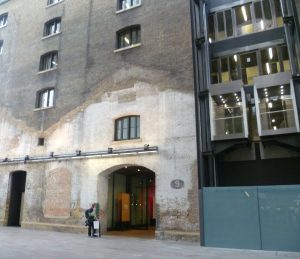 Inside the Granary Building, the architects have deliberately left traces of the old sheds on the wall. You can see where Shed No. 9’s roof once was and the huge space in front of it now has ping-pong tables for the students. Anyone can play for free; you don’t have to book, just turn up. Bats and balls are supplied. 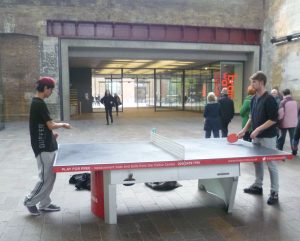 Next door is the brand new Canopy Market, a Farmers’ and Craft Market. It opened the very morning I visited. I asked Ted of Ted’s Veg how things were going. ‘Very well,’ he said. ‘It’s a great space.’ 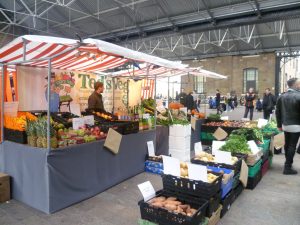 Next door is the House of Illustration, housed in another former warehouse. Note the tall red crane on the left. Cranes are everywhere, together with yellow lifting platforms and dozens of men wearing luminous yellow jackets and hard hats. (At the bottom left you can see the ice cream cart belonging to Ruby Violet’s corner shop, of which more in a moment.) 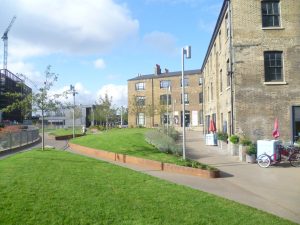 The House of Illustration (at top) plus view

The House of Illustration is now a small Art Gallery, currently showcasing two children’s book illustrators: an Edward Ardizzone retrospective, and an exhibition of Quentin Blake’s illustrations for Kitty-in -Boots.

I simply couldn’t resist going inside Ruby Violet’s ice cream shop on the corner. Dana, the Events and Sales Manager, told me they are about to launch their winter selection, including delicious hot chocolate. I thought: I’ll be back!’ 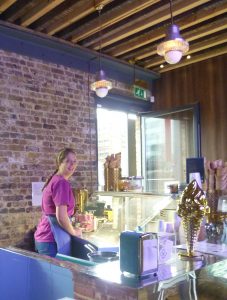 Round the corner, I came to Art House Residential, a housing complex, all glass and balconies. The planting here, and throughout the site, is sustainable and based on wild flowers found in railway sidings; they look after themselves, with the occasional tweak. Railways tunnels run directly underneath, so the garden’s weight is carefully monitored. Every train out of King’s Cross has to go under Regent’s Canal, so trees need special planning permission and their roots have to be shallow. 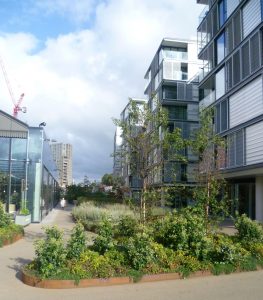 I walked up through Lewis Cubitt Park, noting that the plants are in special raised up beds. 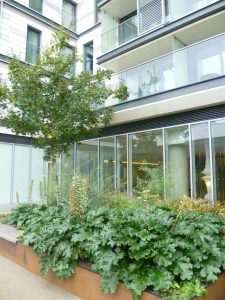 Acanthus and small tree tucked away in a corner

Beyond the flats there is a children’s playground and the Skip Garden, full of flowers, planted and maintained by local school children. When the builders want to move in, the skips are simply lifted up and moved to another location. 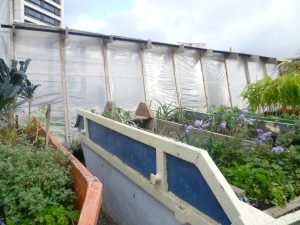 Behind the Skip Garden is a temporary viewing tower. Looking south and west you see how many building projects are going on simultaneously. Look north and you can just spot the Eurostar railway tunnel coming from St Pancras. I managed to get a photo of the Gatwick Express as it shot through.

Turning into Handyside Street, parallel to Granary Square, the Educational Centre tower block is flanked by a number of impressively tall cranes moving scaffolding about. The two men perched half way up the outside look like mini Bob the builders. Respect, guys! 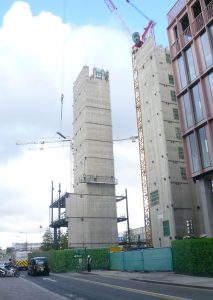 The Education Centre under construction

Turning left – and avoiding the dumper trucks, which are everywhere – you come to Stable Street, once home to dozens of horses who hauled goods from the canal barges to the warehouses. The Visitor Centre here does regular tours of the King’s Cross site. 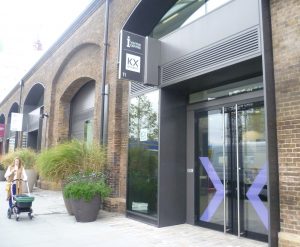 The most astonishing transformation of all is what’s happened to the gasholders, once an impressive sight along Goods Way. They were dismantled carefully, sent to Birmingham to be restored, and then returned to new homes. Gasholder 8 now has a small park inside it. And very impressive it looks with the gasholder itself acting as a sort of Greek peristyle surrounding a saucer-shaped grassy space. It allows you to look closely at the wonderful details of the original gasholder. 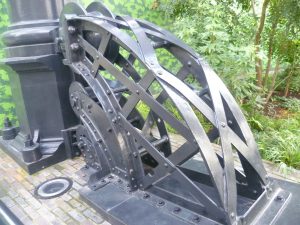 Gasholder 8: detail of the base

Three of the large gasholders, which are cleverly linked, are having stylish blocks of flats built inside them. The photograph shows the buildings in progress with the enormous cranes towering above them. 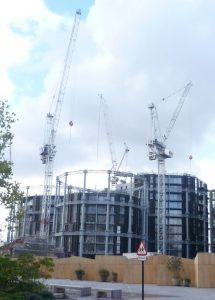 As well as all this, there are restaurants, cafés, bars, an Everyman Cinema, the Platform Theatre, specialist shops, a Waitrose, the Barnes School for Deaf Children. (Next year’s musician in residence will be the drummer, Dame Evelyn Glennie.) There are ten new parks and squares, sports facilities and a library. What’s more, it’s car free. I’ve only managed to touch on a few of the most interesting buildings. It’s a small part of what’s already here; and there’s much more to come.