About ten years ago I decided I’d like to make my own jewellery. Somehow, I never had quite the right necklace, bracelet or earrings; they were too short, too long, the wrong colour, or just not very interesting. Surely, I thought, I could make my own – if only I could find a book to set me on my way. And Barbara Case’s Making Beaded Jewellery proved to be exactly what I needed. 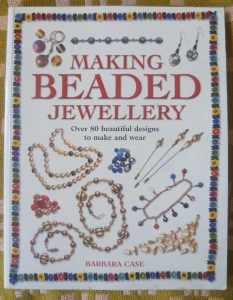 I already had various broken bits of jewellery that I’d inherited – one thing about being the only girl in the family is that your grandmother or great aunts’ old-fashioned beads tend to come to you. I had a shoe box full of jet beads, single earrings, broken necklaces and a small glass jar full of sparkling cut steel beads. Surely I could do something with them? 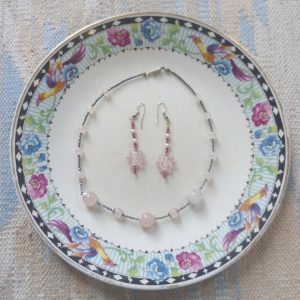 I made a shopping list of essentials to get me started and went to the Bead Shop in Covent Garden. Luckily, a dear aunt had been involved with Unity Theatre in the Thirties and, amongst her things, I found some tiny pliers, a sharp pair of small scissors and lots of sewing thread – not to mention a wonderful bag of bits and pieces she used when making costumes for the theatre. (It was my aunt who’d left me the steel beads.) The rose quartz and steel beads set was my first attempt at making jewellery. 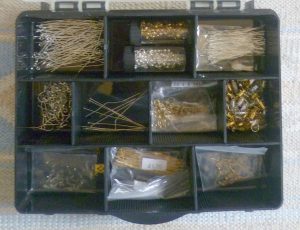 My box of findings

‘Findings’ is the generic name for all those things you need to finish off the jewellery you make: necklace clasps, earring hooks, head pins for making dangly earrings, and so on. 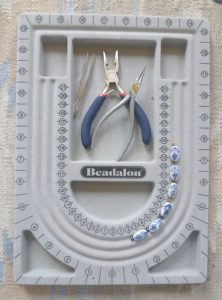 My bead tray is also really useful. It allows you to put the beads in sequence and see what your necklace or earrings will look like before you actually start. You’ll see that I’ve put out six blue and white Chinese beads; three of them have dark blue beads in between and the other three have gold beads which allows me to decide which to go for, blue or gold. The bead tray is also useful for holding the pliers, tweezers etc. The surface is felted so the beads don’t roll about. 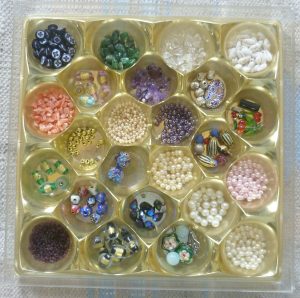 Initially, I didn’t buy a proper bead box; I used a Ferrero Rocher box and it works pretty well – and it was no trouble at all to eat the chocolates! You will see that I have a number of semi-precious stone chips: jade, amethyst, garnet, crystal and coral. The Geological Museum (part of the Natural History Museum) used to sell necklaces of small semi-precious stones for only a few quid. 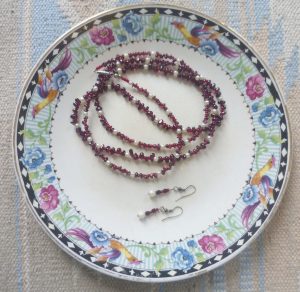 I bought a garnet necklace, and a necklace of jade, amethyst and rock crystal, both of which I dismantled. The long necklace and earrings set above was made from the Geological Museum garnet beads. I made it long enough to wind three times round my neck and become a choker, or be a two strand ordinary necklace, or a long 1920s- inspired necklace. 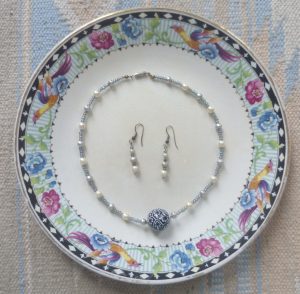 I found several ‘statement’ beads in the bits and pieces I had, and I made myself the choker and matching earrings set above using an attractive large black and white Chinese-looking bead. It’s turned out to be a very useful set as it goes with most things. 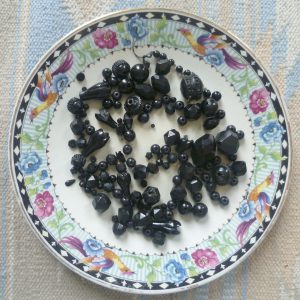 My paternal great-grandmother was a great one for jet beads. She was very much a late-19th century lady when proper mourning observance was part of what one did. So I have a lot of jet jewellery with bits missing. The problem with late Victorian jet beads is that they are brittle and tend to break easily. 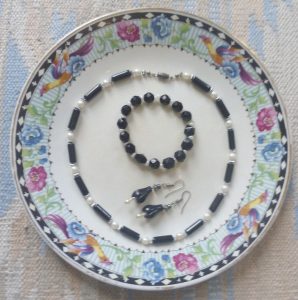 I made myself a ‘jet’ set, but the necklace is black onyx and pearls – and is Art Deco inspired. The bracelet is made from jet beads, matched as evenly as I can, and spaced with pearl beads. I’m rather pleased with my black flower earrings with the small pearl stamens – I was inspired by my fuchsia. I have a number of jet flowers, but many have broken, so I was thrilled to find two which were the right size and undamaged. I’m very careful with the flower earrings. If one of them breaks, then that’s it. 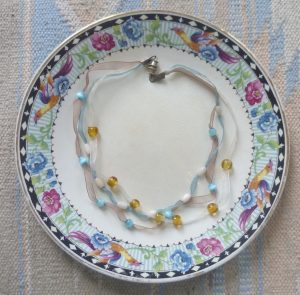 I made the above because beads on ribbon necklaces became fashionable, and I wanted to see if I could make one – fixing the three ribbons to the clasp was very fiddly. Unfortunately, I didn’t realize that the amber coloured beads had larger holes than the other beads and the ribbon didn’t hold them in place as well. So this is what happened…. 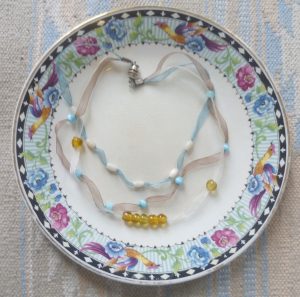 Alas, this necklace didn’t quite work

I’m not sure what to do about it. The last thing I want to do is to open the clasp which holds the three ribbons in place. Any suggestions would be gratefully received!

What I particularly like about making my own jewellery is that I can have exactly what I want. I can make a necklace or earrings to go with a particular dress or shirt. And, if I don’t like it, I can take it apart and try again. And, if I lose an earring I’ve made, I can always make myself another one – unless it’s jet, of course.

6 thoughts on “Making Your Own Beaded Jewellery”