What makes people want to own something that once belonged to someone famous? Is it a desire to acquire some quality of the deceased by a sort of spiritual osmosis? Or is the object more akin to a relic, something to be venerated. Or, more personally, perhaps it reminds the new owner of a precious memory of the loved one, as with the 19th century fondness for locks of hair incorporated into mourning rings, brooches, and so on. 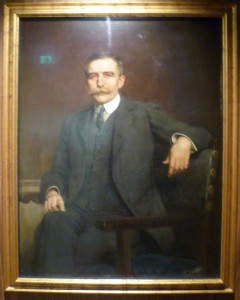 I was pondering this question when I visited the Wellcome Collection in London, founded by Sir Henry Wellcome, pharmaceutical entrepreneur and also founder of The Wellcome Trust which funds medical research. He was an obsessive collector of things medical and his collection is wide-ranging, not to say eccentric. It includes a number of objects only tenuously connected with medicine which once belonged to famous men – and women.

Take Napoleon’s toothbrush, dating from 1790-1820. It has a silver handle and horsehair bristles. There’s a sort of macabre interest in looking at the toothbrush of the ‘Corsican Monster’ and I found myself thinking that at least the battle of Waterloo wasn’t lost because Napoleon was suffering from toothache! Where does the toothbrush come from? Was it found amongst his things after he died on St Helena? Unfortunately, there’s no provenance to tell us.

But why collect it at all? I suppose acquiring an early 19th century toothbrush at least proves that cleaning teeth had progressed beyond rubbing one’s teeth with a piece of damp linen dipped in salt or coal dust as was apparently the case in Britain until the late 18th century.

Nearby, I came across Lord Nelson’s shaving knife, a cut-throat razor in horn and steel, dating from 1790-1820. It looks lethal. Nelson had only one eye; it would surely have been unsafe for him to shave himself, and I certainly wouldn’t like to be the man who shaved the National Hero on board a rolling ship.

Why did Wellcome want it in the first place? And did he use it on board ship? We don’t know but it does demonstrate that Nelson was careful to set a good example and be seen properly shaved and fit to represent His Majesty’s Navy. 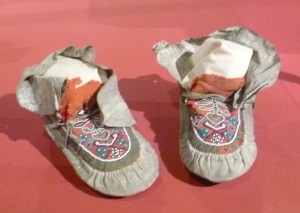 The museum also has Florence Nightingale’s moccasins. These date from 1850-56, so she must have worn them in the Crimea. They are about size 3 or 4 and made of leather, fabric, glass and beads. Presumably, she wore them as slippers after work. They would hardly have survived the early months at Scutari when the floor of the so-called hospital was little more than mud.

The 19th century had a problem with famous women, especially with one who was ‘a lady’. Ladies, by definition, were supposed to live quiet lives, out of the public eye. Mid-19th century women who fought for Women’s Rights, for example, could be labelled ‘hyenas in petticoats’ and held up to ridicule. But the public was on Florence’s side as she fought for medical supplies and pushed through sweeping reforms of the hopelessly inefficient Army hospital nursing. One might argue that the Press attempted to neutralize her battling spirit with the suitably womanly soubriquet, ‘The Lady with the Lamp’.

How did the moccasins come into the collection? Did they get left behind when she left the Crimea for home? We are not told. But it is pleasant to find that so formidable a lady was not averse to a little feminine frivolity in her leisure footwear.

The Wellcome Collection is well worth visiting. I’ve only looked at three of the exhibits but there are hundreds of other fascinating objects in the collection. I’m glad I discovered it. www.wellcomecollection.org