What happened to the Roman temples and public buildings after the fall of the Roman Empire when they suddenly became redundant? The answer is simple: they were robbed for building materials. 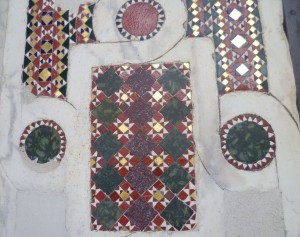 Just think how much material there was to take! All over the Roman Empire there were thousands of temples, expensively clad in marble – some of it carved, and with marble or stone columns supporting pediments and roofs of dressed stone. And that was just the temples. Every Roman town would have had its forum, with colonnades, amphitheatre, public baths, and dozens of other public buildings, all made of expensively cut stone and marble. 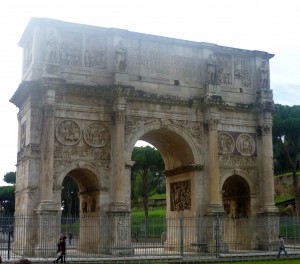 The Arch of Constantine, Rome

Recycling Roman building materials became a lucrative business for builders of the new Christian cathedrals in the 12th and 13th centuries. There were a few nods towards religious propriety – Constantine was the first Christian Emperor, so the Arch of Constantine in Rome was allowed to remain, but, otherwise, everything was up for grabs. 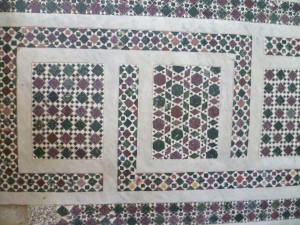 Enter the Cosmati family, marble workers in 12-13th century Rome who became famous for their marble, and gold and glass tesserae decorative inlays. The style itself originated in Constantinople but the Cosmatis turned it into something special by their use of different sized and shaped marbles, as opposed the tesserae for Roman mosaics which were all the same size. By far the most expensive material was coloured marble (mainly reserved for Imperial projects): yellow from Tunisia; red porphyry from Egypt, dark green Carystian (cipillino verde) from Euboea; and red Phrygian from Central Turkey. 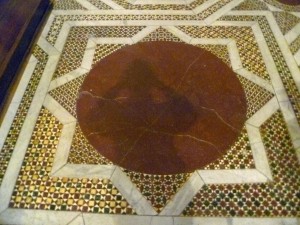 The Cosmati, with great ingenuity, sliced expensive porphyry columns as if they were salami and turned them into roundels within a geometric pattern, as in the example above from Monreale cathedral in Sicily. 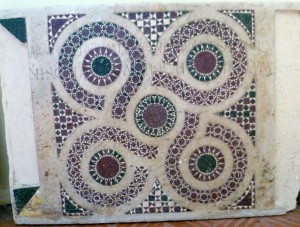 And, in acknowledgement of the art’s Ottoman origin, the geometric pattern above showing a decorative panel in Farfa Abbey exploits the mosaics’ potential to the full. Note the use of the expensive porphyry and the green Carystian cipollino verde: this Benedictine monastery could afford the very best. 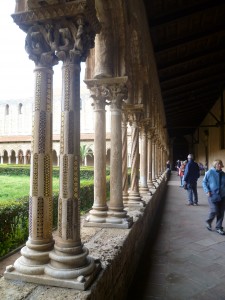 But Cosmatesque work could be small scale, too. Take the columns of the cloisters in Monreale Cathedral, Sicily, where the decoration goes up the sides of the columns, sometimes straight, sometimes spiralling, and sparkles where it catches the sunlight. 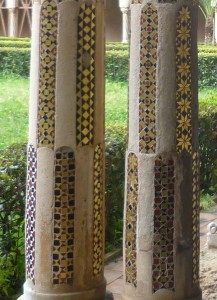 For many years, whenever I saw a Cosmatesque geometric pattern using a slice of what was once a porphyry column from a Roman temple, my first reaction was to think that the recycled marble would look so much better in the temple for which it was originally designed. It felt like vandalism. However, I have to admit that Cosmatesque work has grown on me and, nowadays, I can also see that the wonderful floors in so many medieval cathedrals with their swirling geometrical patterns are beautiful in their own right. 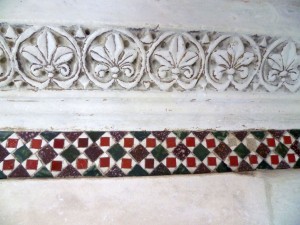 All photos taken by Elizabeth Hawksley

7 thoughts on “The Fabulous Decorative Work of the Cosmati family”