This post is about Roman Germany – something I used to think was a contradiction in terms. So I shall to start with a map to show what I mean. 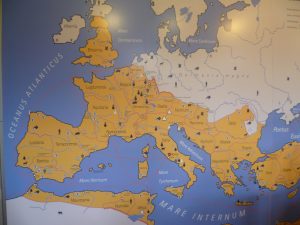 The orange shows the extent of the Roman Empire in about 150 AD. As you can see, it stretches far into modern Germany. The red dotted line along the eastern edge shows the limes (pronounced lee-mez, from the Latin word for ‘limit’), the line of watch towers (originally wooden and later rebuilt in stone) and wooden palisades which marked the Roman Empire’s eastern border. It included a sort of wobbly hypotenuse between the Danube and the Rhine, enclosing a large chunk of modern-day southern Germany, Austria and Switzerland. 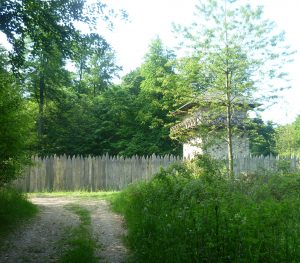 The Zugmantel watch tower and palisade

The Germans, as I learnt, have a very different archaeological practice from the UK. After careful excavation, they sometimes decide to reconstruct buildings on top of their original foundations, as above, at Zugmantel. We walked through woods to get here. The watch tower was originally built in wood in about AD 90 and later replaced with stone. This reconstruction, together with a stretch of the wooden palisade, is about 75 kilometres north-east of Mainz. The palisade is made of thick oak planks, set edge to edge with sharpened points on top and far too high to see either over or through. At its peak, the limes ran continuously for 550 kilometres. It must have been a formidable obstacle for any Germanic tribe thinking of invading. 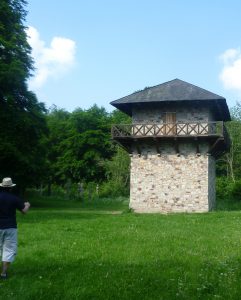 Watch tower with an artillery platform

The Zugmantel watch tower was part of an auxiliary fort, complete with bath house and a civilian settlement around it, and nearby, about 100 metres away, in the woods, there is an amphitheatre for weapons training and possible animal displays. The fort was eventually overrun by the Alemanni in AD 259/260. 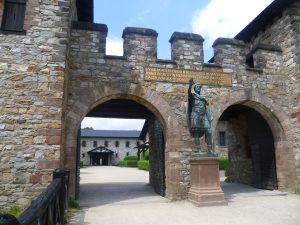 The Saalburg fort: the porta praetorian. Men on horseback could ride though easily.

Then we went to see the Saalburg Roman fort and its scale is impressive. This is one of Germany’s most famous reconstructions; it was excavated and rebuilt between 1889 and 1907 under the auspices of Kaiser Wilhelm II, who followed the archaeological developments with great interest. The fact that Germany had once been part of the Roman Empire was important to the Kaiser. Following the unification of Germany in 1871, he needed a concept to unite the different duchies, principalities etc. into a new Germany under Prussia; emphasizing their common Roman inheritance helped to bind them together.

Note the inscription (in Latin, naturally) above the gateway proclaiming the Kaiser’s involvement. Under the statue of the Roman Emperor Antoninus Pius there is another inscription where the Kaiser’s name is, significantly, much larger than that of the Roman Emperor. Yes, this is, for the most part, an archaeologically accurate reconstruction, but it is also political propaganda for the new Germany. 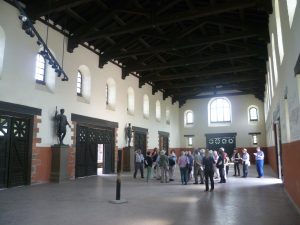 This large room is where the soldiers exercised. The post in the middle of the floor is for swordsmanship practice. 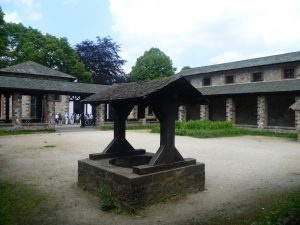 The courtyard, next to the drill room, is surrounded by a colonnade with rooms behind for storing weapons and arms. Note the well. Nearly a hundred wells were found on the site and their waterlogged depths preserved a lot of fascinating organic finds. 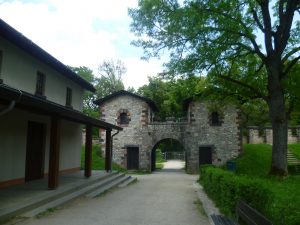 The granary, on the left, is now the museum

The photo looks at the entrance gate from the inside. The granary is on the left and it’s now a fascinating museum. The site also has reconstructed barrack blocks, and the remains of the bath house, baking ovens etc. The walls of the fort and major buildings have been reconstructed but much of the fort still lies underground. 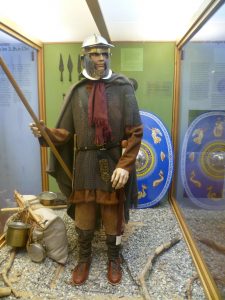 Model of Roman soldier in the museum

I liked the model of an ordinary Roman soldier – suitably dressed for northern climes – including a woolly scarf, possibly knitted by his mum or girl-friend. Archaeologists have unearthed letters from soldiers stationed at Vindolanda, on Hadrian’s wall, writing home asking for woolly socks, so my suggestion here is credible. 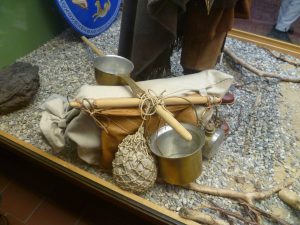 Each soldier had to carry a large amount of kit, including water bottle, cooking equipment, a selection of tools, his weapons and armour, three days rations and so on – which added up to about 30kg. You can see the wooden cross frame which supported all his clobber. Soldiers were expected to walk 20 miles a day carrying this. Fortunately, for every eight soldiers there was a mule to carry their tent and other unwieldy items. 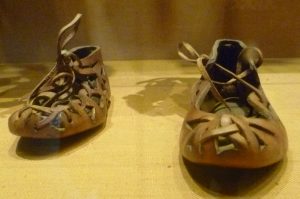 The museum has a lot of shoes on display, all of them superbly preserved in the water-logged ground. This pair is not a reproduction; they are the genuine article. 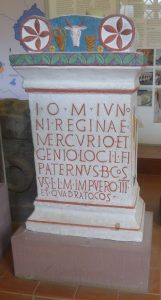 One thing reconstruction offers the modern visitor is, not only to experience the reality of a building’s size and physicality but also to see that the Roman world was a colourful one, as this regimental altar shows.

Today, the Germans treasure their Roman past and there are a number of reconstructed Roman forts, Roman baths complexes, as well as private houses, numerous bits of Roman wall, and some really excellent museums.

My guide lecturer to all this was archaeologist, Tony Wilmott. He is a great communicator and made us laugh as well as think. In 2012, the magazine Current Archaeology voted him Archaeologist of the Year, and I can understand why.