I’ve been longing to visit the beautiful Leeds Castle in Kent for a long time and, a few weeks ago, I finally managed it. It’s spectacularly sited on two rocky outcrops in a lake created by the river Len. 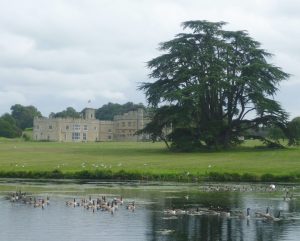 Castle with waterfowl: the flag flies over the Gloriette, or keep

In 1090, William the Conqueror gave the original Saxon manor to his cousin, Hamo de Crèvecoeur, who built the original castle keep on the far outcrop, with a drawbridge joining it to a bailey and gatehouse on the other island. Another drawbridge connected that to the mainland. These were turbulent times and Leeds Castle was built to withstand siege which, indeed, it had to, several times. 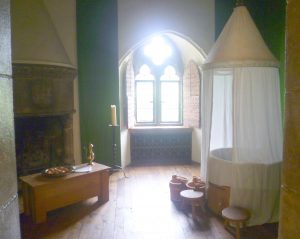 It remained a royal castle for nearly 300 years, and became the dower house of a number of medieval queens, including Eleanor of Castile, much-loved wife of Edward I. (This was the Eleanor who, when she died in 1290, had her coffin’s resting places between Lincoln and Westminster commemorated by her sorrowing husband with an ‘Eleanor’ cross.) Eleanor’s bathroom has been recreated in the Gloriette (the keep). The wooden tub is covered in white muslin with a draped muslin canopy to indicate the queen’s status. The warm water would have been scented with herbs or rose petals, and the luxury of a fireplace ensured the queen’s comfort. There is a tap at the base of the tub to drain off the water. 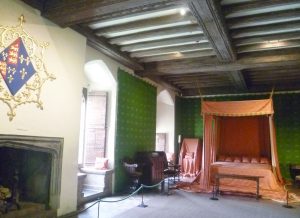 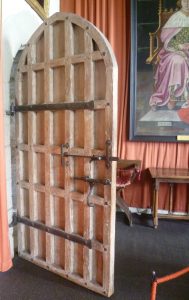 The Banqueting Hall was built for Henry VIII when he and his first wife, Katherine of Aragon, stayed with a joint entourage of over 5000 people, en route to his meeting with François I of France: the Field of the Cloth of Gold. Heaven knows where they all camped.

The Banqueting Hall is the largest room in the castle but what we see today is a 20th century restoration in the Tudor style, which includes various authentic 16th century pieces. I particularly liked this impressive door. 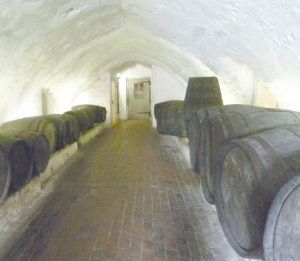 Little survives of the medieval castle. The cellar, dating from the 12th century, is perhaps the earliest. It is cool and dry and has long been used for storing wine. Once the castle passed into private ownership in 1552, its various owners rebuilt it according to the current taste and their personal circumstances. 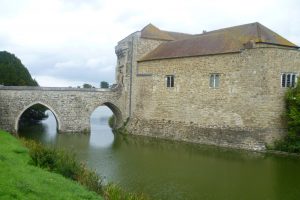 The gatehouse with moat

The first thing the visitor sees is the gatehouse; it looks seriously impressive, complete with machicolation, a projecting structure with holes above the gateway to pour boiling oil down on unwelcome visitors. It dates, however, mainly from the early 20th century, when the remains of the medieval inner gatehouse were demolished and the gatehouse itself largely rebuilt. The result is imposing and it certainly gives the visitor the feel of what entering a medieval castle must have been like. 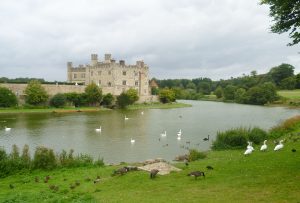 Maiden’s Tower, the New Castle is behind it

The Maiden’s Tower is – more or less – the genuine article. It replaced a medieval tower which housed an anchorite, a religious recluse called Christina Hyde, who lived in a cell there in the late 14th century. A document records that Richard II paid four pence a day for Christina’s upkeep. Henry VIII later rebuilt the tower to house Queen Katherine’s ladies-in-waiting. The battlements were probably added in the 17th century. 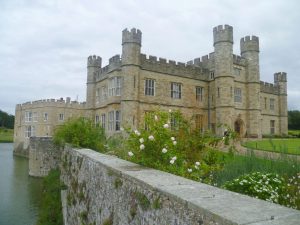 The New Castle, dating from 1822; you can see the Gloriette in the background.

The original castle itself was demolished by Sir Richard Smythe, who owned it in the 17th century. The medieval castle, which had had to cater for the needs of so many medieval queens and their entourages, was doubtless not fit for purpose for a 17th century gentleman. He wanted a castle built in the Jacobean style to which, a generation or so later, another owner gave a Strawberry Hill Gothic façade. This, too, was demolished in 1821 and a New Castle was erected ‘in the Tudor style’ on the same footprint.

Meanwhile, the 17th century Gloriette was used to house French and Dutch prisoners during the Anglo-Dutch wars, and they set fire it, doing a lot of damage, which wasn’t finally repaired until 1822, when the New Castle was built. 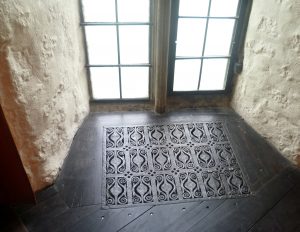 However, the most spectacular makeover occurred in the 1920-30s when the castle was bought by the Anglo-American heiress, the Hon. Olive Paget, later Lady Baillie. She decided to recreate the medieval castle, but with a modern twist – no draughty castles for her! It was underfloor heating, thoroughly modern plumbing, and complete renovation of the servants’ quarters; not to mention much re-construction of the entire castle to suit her 20th century Society hostess needs.

I am deliberately not including photos of various drawing-rooms, dining-room etc. Instead, I am going for the quirky touches which Lady Baillie introduced and which, in my view, make Leeds Castle unique 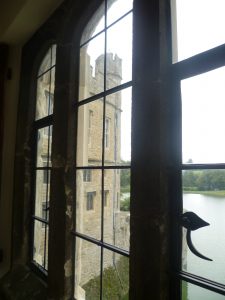 The French designer Armand-Albert Rateau created what can only be described as a Gothic fantasy for Lady Baillie, somewhere she could hold her lavish house-parties where she entertained European royalty, statesmen, including Winston Churchill, and film stars. Later, Stéphane Boudin was her interior designer who specialized in the French 18th century look. External work on the castle included the creation of tennis courts, a squash court, and a swimming pool, complete with wave machine. The general effect is Cecil B de Mille’s Hollywood meets Madame de Pompadour. 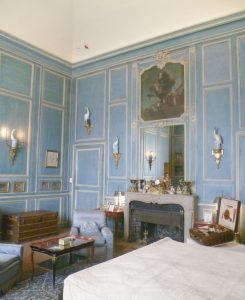 Lady Baillie’s bedroom was designed by Boudin in the French Régence style of the early 18th century. The panelling was wire-brushed to raise the grain, then limed and glazed. The blue colour was then rubbed in dry before it was finally beeswaxed. The effect is stunning; Madame de Pompadour, a lady of exquisite taste, would have loved it. 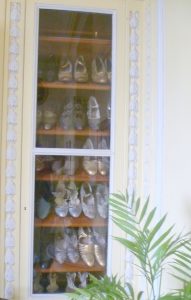 Lady Baillie obviously had a touch of Imelda Marcos about her relationship with shoes. 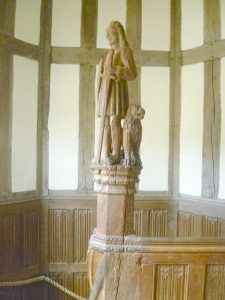 Elsewhere, Rateau had an excellent eye for the medieval. This spiral staircase with its oak linenfold panelling, looks thoroughly original, but it is, in fact, a clever pastiche. He was brilliant at sourcing genuine panelling and other architectural features from houses about to be demolished and cleverly reusing them in Leeds Castle. One of the guides told me that the (modern) twisted newel post was carved from a single tree trunk with a carved crusader finial at the top. 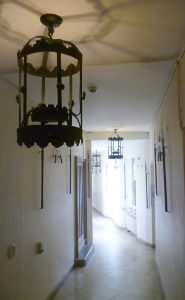 I really liked the various details which give the castle that ‘authentic’ medieval touch, for example, the elegant lighting in the upper bridge corridor which links the castle proper to the Gloriette. It manages to be both Tudor and art deco. 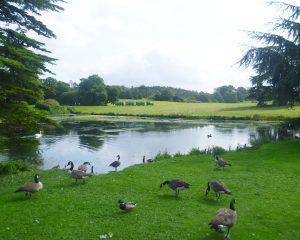 General view with little train for visitors in the distance

Leeds Castle is a fascinating place to visit – and only about one and a half hours from London. I’m so pleased I finally managed to get there.

2 thoughts on “The Spectacular Leeds Castle”