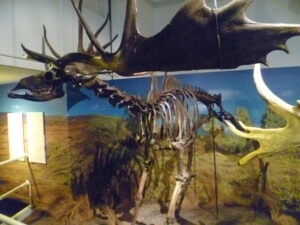 Having grabbed out attention – we are now in the Neolithic – the New Stone Age, and the museum shows us something of how the people lived at a time when humans became seasonal farmers as well as hunter gatherers. The implications were enormous – for the first time, human beings ceased to be nomadic and follow their prey; instead settling down in one place to sow, tend and harvest various crops, and rear domesticated animals. 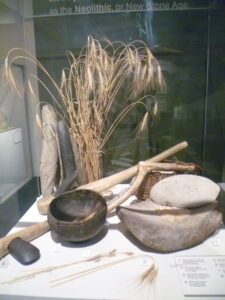 I like the artistic way the objects above are presented. The New Stone Age people have new tools – now that they are farmers as well as hunters. There is a beautifully-shaped axe head in a stout wooden shaft; an early variety of barley; a pottery bowl, a quern stone and a stone to grind the barley; a hand plough and a number of long shaped stones with varying uses. 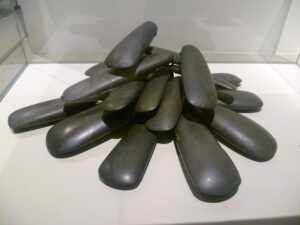 I couldn’t initially work out what these were. It wasn’t until I saw the one embedded in the wooden shaft (above) that I realized that it was an axe head. No wonder they are found in burial sites – they are obviously high status objects and they must have been much valued. 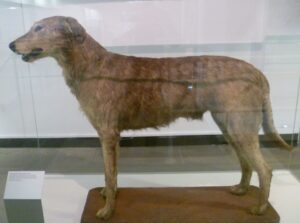 Dogs were domesticated early; at first, probably, to accompany hunters and help to bring down the prey, or to find and pick up wounded birds, but they would also have had a role as watch dogs on the look-out for wolves – or strangers. 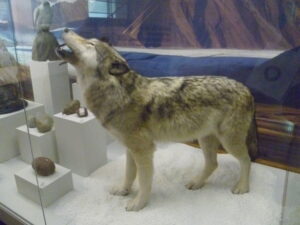 It is interesting that the dog on display looks not unlike the wolf above; they both have similar long pointed noses. But the dog has become more streamlined, and the wolf is a bit stockier – perhaps because, as a pack animal, it must defend its status and position in the pack. Nevertheless, the dog eventually evolved from the wolf and became domesticated and an important part of human lives. 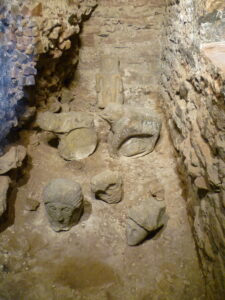 The development of farming meant that tribes settled down in one place and the broken cult objects above speak of a new relationship – with the gods. 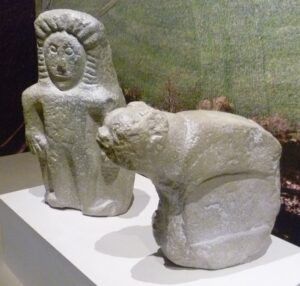 The figure standing on the left has rays coming out from his head. Could he represent the sun god and hero, Lugh? And the animal on the right? It looks like a bear but, according to the information board, there were no bears in Ireland. 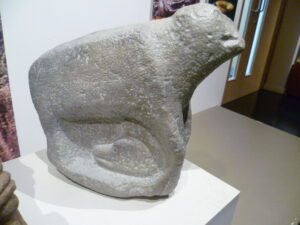 This creature – a boar? a dog? – has a snake’s head behind his front foot

Human culture has arrived and stories of gods and heroes, as well as creation myths evolve; with tales to be told around the hearth fires at night. 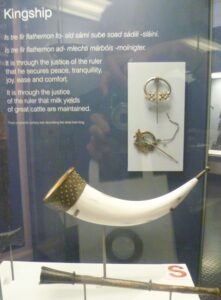 The Bronze Age: a Tribal Society ruled by a King.

Humans now live in a more sophisticated society: the craft of metalwork – for which the Irish will become famous – is well underway: above, we have two bronze cloak brooches on the wall, and there is a drinking horn with a metalwork trim at the top and a neat metal finial at the base. Underneath is a horn: is it just a hunting horn to summon the dogs, or does it have holes which means that it is able to create different notes? (Unfortunately I can’t see it closely enough to tell) Whichever it is, Ireland is now a tribal society ruled by Kings. 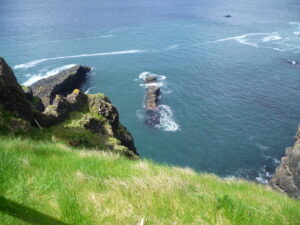 The Museum now jumps to the Spanish Armada in 1588; a major event in the history of Northern Ireland. A whole room is devoted to the story of the Spanish Armada and what happened. The Armada failed in its objective to conquer the English and the remaining Spanish ships were forced to battle their way up England’s east coast, sail round the top of Scotland weathering storms, being battered by rocks and attacked by unfriendly natives, before struggling down the west coast of Ireland, losing ships and men all the time. 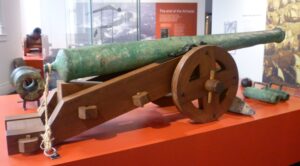 A cannon from the galleass, Girona, which foundered off Lacada Point, Country Antrim

Very few ships survived to reach Ireland and, of those, only one returned to Spain. There are number of sites nearby where sunken Spanish galleons still lie; and, as well as the cannon from the Girona, a large number of gold and silver coins and other artefacts have been retrieved from the sea bed. 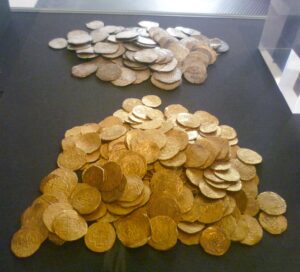 There are a number of helpful information boards on the wall which take the visitor through the story and explain what happened when. The Girona, a galleass, was one of the largest ships in the Armada, built to carry 500 men. A galleass was a heavy, low-built vessel impelled by both sail and oars. By the time the Girona was wrecked, she had 1300 sailors aboard, mostly men who were survivors from other ships. Alas, only 5 men survived. 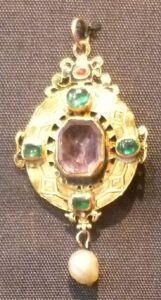 Gold and emerald earring from the wreck of the Girona

In case you are wondering whether women were also on board, the answer is that, at that time, earrings were fashion accessories for men as well as women. There is a well-known portrait of Sir Walter Raleigh wearing a single earring. 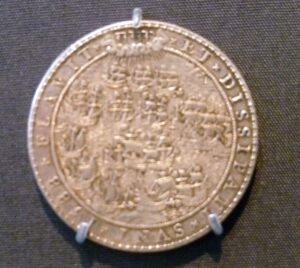 At the time of the Spanish Armada, King Philip II of Spain ruled over the Netherlands, and the Protestant Dutch were fighting for their independence. The medal was one of several coins struck to celebrate the Spanish defeat. The coin has a Latin inscription from the Bible round the edge which reads: Flavit et dissipati sunt. (‘He blew and they were scattered.’) Above the clouds (which look like a sort of fluffy necklace at the top of the picture) some Hebrew letters read: ‘Jehovah’. The rest of the coin depicts the storm which scattered the Spanish ships. 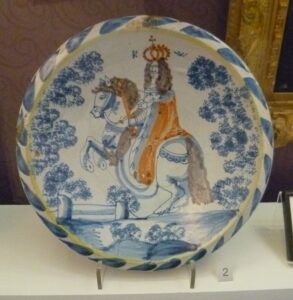 Plate of King William III celebrating his victory at the Battle of the Boyne, 1690; you can see K and W on either side of his crown

The plate above, interestingly, resembles plates showing King Charles II in the oak tree; both have a similarly naïve style with slightly slapdash colouring. I found myself thinking about how different the stories about Northern Irish history as depicted in the Ulster Museum are from the choice of important local history that visitors see when visiting the Museum of London, say – even if the souvenir plates are similar!

Ulster has has its own different, but equally interesting stories to tell: The Irish elk; their wonderful Celtic inheritance; the Spanish Armada; and The Battle of the Boyne won by the Protestant King William III. The Ulster Museum both illuminates and comments on how its history has affected the Northern Ireland we see today.

The Museum of London offers Roman artefacts retrieved either from the Thames or from excavations whilst undertaking building work. For London, the Roman invasion is plainly significant – the Romans never occupied Ireland. Another major London incident was the Great Fire of London in 1666. The ‘peep show’ of the spread of the Great Fire has been popular in the Museum for at least 70 years. The Ulster Museum, naturally, chooses to look at the same Armada which sailed past London, but with its own much more dramatic story to tell.

I very much enjoyed my visit to the Ulster Museum.

2 thoughts on “The Ulster Museum: From Irish Elk to Spanish Treasure”