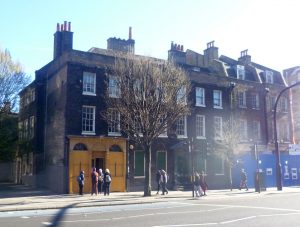 When the foundry moved to Whitechapel Road in 1738, it took over the 17th century Artichoke Inn. A  map shows a large open yard at the back, a gateway to a convenient side road, stabling, and a smithy: in short, there was plenty of room for the foundry to expand into. 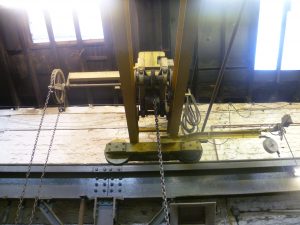 The yard space was turned into a foundry with a ceiling with windows for light, and overhead tracks for moving heavy equipment. 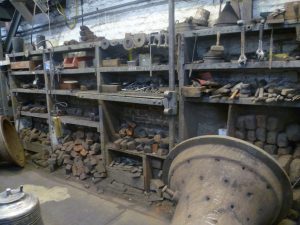 The Bell Foundry: 280 years’ worth of equipment. Note bell cope on its side in the foreground

I’ve always enjoyed seeing traditional workplaces; they often look chaotic, overcrowded and dirty, and the Bell Foundry is no exception. But, as I was to learn, everything was in the right place for the work it had to do. For example, there were four pails containing sand, horse manure, goats’ hair and clay to create the moulding loam – as has been done since medieval times – and a number of different-sized outer moulds, called copes. The inner mould, the core, is shaped using a moulding gauge. It is highly-skilled work. Cope and core have then to be fitted together precisely and cast, with the bell metal carefully poured into the gap between the two moulds. 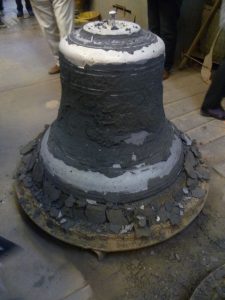 Bell metal is an alloy: 77% copper to 23% tin. It is hard, which gives the bells their fine ring tone, but it can be brittle and needs careful handling. One the metal has cooled, the cope is removed to reveal the bell, which must then be cleaned, tested, drilled and tuned. 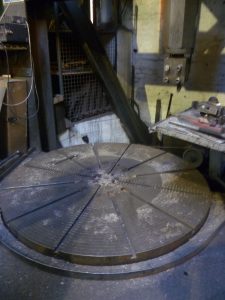 The tuning area. The bell is secured upside down on the circular base and harmonically tuned

This is a complex business. Modern church bells are tuned on the ‘five tone’ system which is basically a blending of tones to create depth in the note desired, but, at the same time, making sure that the bell will tone sympathetically with the other bells in the belfry. Tiny adjustments are made to the bell by trimming excess metal with a lathe and constantly measuring the frequencies using modern electronic equipment until the tone is perfect. 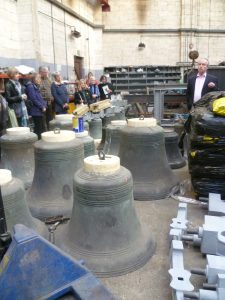 The bell is then moved to the Fittings and Framework workshop. This is another large room with ceiling windows and equipment to lift the bells. The fittings include custom-made wrought iron, timber frameworks, casting iron and steel – whatever is needed to hang the bells safely and securely in their final destination. 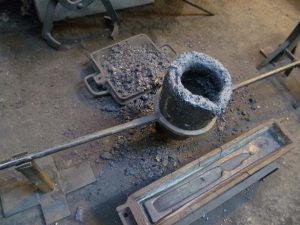 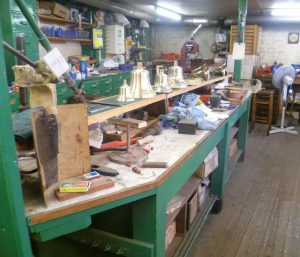 Hand bell workshop area for tuning, adding the leather-covered handles; the clapper, held clear of the bell by felted springs; and, of course, the polishing 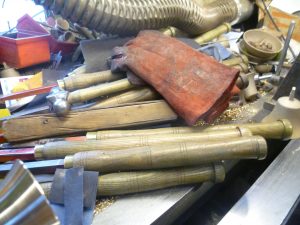 It looks chaotic, but each tool is there to do a very specific job. The snake-like tube at the top of the photo is an extractor to remove any dust. And it’s needed; a box on the wall labelled Emergency Eye Wash Station, and the thin twists of shiny metal everywhere demonstrate that this is, potentially, a dangerous place. 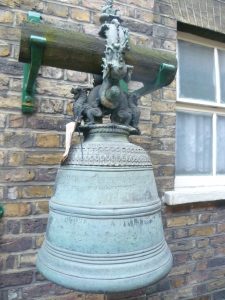 So, what happens now to Britain’s oldest manufacturing company? Mr Hughes told us that the very last bell cast was for the Museum of London, to which the foundry is donating many artefacts, including old machinery. And the foundry archives are going to the London Metropolitan Archives, where they will be made available to the public. 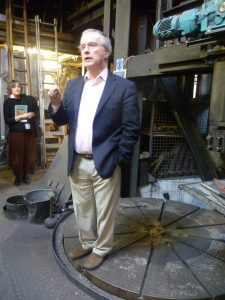 Mr Alan Hughes standing on the tuning base

He has made arrangements with Westley Group Ltd to cast the Whitechapel bells; Whites of Appleton, Church Bell Hangers, have bought the pattern equipment to make Whitechapel components (they have been dealing with the foundry for 197 years); and Whitechapel musical hand bells and other musical accessories will be available from Bells of Whitechapel Ltd. The building itself is Grade II listed, and its new owner will respect its historic status.

Mr Hughes’ talk was fascinating: everything was explained clearly, fluently, and with a humorous touch. He was bravely up-beat about the future. All the same, it must have been a heart-breaking decision to make.

8 thoughts on “The Whitechapel Bell Foundry”