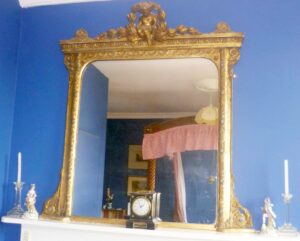 The mirror above once rested on the marble mantelpiece in the drawing room of my childhood home in Co. Durham – a formal room to which the ladies withdrew after a dinner party, leaving the gentlemen to their port and salacious stories. I was rarely allowed into the drawing-room, so the mirror always held a special glamour for me.

However, it you look closely at the decoration, you can see that the scallop shell decorative band along the top doesn’t quite match and the shells at either end have been unevenly truncated. It was probably the work of a country cabinet-maker, copying a much classier mirror as best he could.

Cupid sitting surrounded by a wreath of golden leaves

When it became mine, it had to undergo a two hundred mile journey from my mother’s house down to London, which didn’t help its already dodgy condition. When a friend helped me to put it up in my bedroom, bits of moulding kept falling off and had to be stuck back. My heart was in my mouth until it was safely up and fixed properly to the wall.

I particularly like the cupid on the top. I’m terrified to dust it because I can see that the plaster is cracked in places. I just blow it gently and hope for the best. 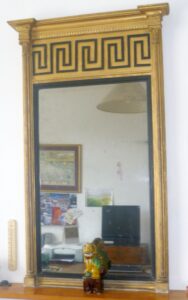 This mirror was in my childhood bedroom, once I’d graduated from the night nursery where I slept with my brothers, and was given my own room. Even when I was a child, I admired the Greek key pattern, there was something about the formal shape it made which appealed to me, and I liked the way the black ‘keys’ contrasted so nicely with the gold. What always annoyed me, though, was that one of the ‘keys’ had broken and slipped. Once the mirror became mine, the first thing I did was to glue the key back in place. It is now in my study.

One thing about old mirrors, is that, when you look at yourself in them, somehow you know that they are telling the truth. The tall, thin, fluted Greek columns on each side of the glass are classical and serious; the Greek key pattern along the top is properly ordered. It’s not a mirror which flatters the viewer as some mirrors do.

Stella Gibbons’ inimitable Cold Comfort Farm puts it beautifully when Flora Poste considers the mirrors in her bedroom at Cold Comfort Farm: ‘Both mirrors reflected Flora without flattery or malice, and she felt that she could easily learn to rely upon them.’ Exactly. 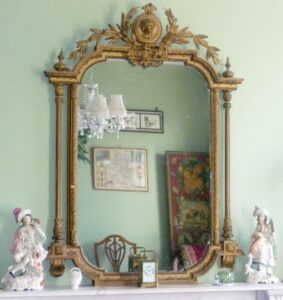 This mirror is lucky to have survived

The mirror above once belonged to an aunt who lived in London throughout the Blitz. She found it in a skip outside a bombed-out house just up the road she lived in and rescued it. The moulding is slightly battered at the top – you can see the once hidden wires which held the leaves in place – and it has long lost its original gilding. My aunt painted it with gold paint and replaced the broken mirror glass. It was obviously made for a tall room so it now sits on the mantelpiece in my sitting room which has the highest ceiling.

I live in a modest terraced house built in 1820 for various tradesmen who serviced the posh squares nearby. The houses have two rooms on each of four floors and mine was originally a baker’s shop: the ovens were in the basement, the shop was on the ground floor and the family lived in the two floors above. (When the house was re-wired, 200 years of gritty coal dust permeated the entire house – you could taste it. But at least it meant that the baker, George Barker, and his family must have kept warm during the winter.) The basement is now a separate flat.

None of my mirrors is particularly valuable – they could all do with professional restoration and re-gilding – time, and the Luftwaffe, have taken their toll. But I still love them.

4 thoughts on “Through the Looking Glass”