Nowadays, I tend to visit Art Exhibitions without an agenda – and I let the exhibition itself point me in the direction of one particular angle rather than another – which it usually does, sometimes in surprising directions. Back then, I was interested in looking at what was on offer from the point of view of a novelist  – that is, the stories they might inspire or what objects might be useful to a novelist.

For example, I was particularly taken by Queen Mary II’s delightful blue and white tulip vases designed to display rare (and expensive) tulips. I decided that the tulip vases had definite dramatic possibilities. The hero’s formidable grandmother, the Dowager Duchess, owns a pair of tulip vases which are her pride and joy. The heroine, Araminta, a sweet-natured girl but badly bullied by her shrewish elder sister, becomes disastrously clumsy whenever she’s nervous  . . . I’m sure you can see where this is going.

However, this time around, I shall leave Araminta to take her chances with the tulip vases and, instead, I shall take a look at some of the other items which interested me. 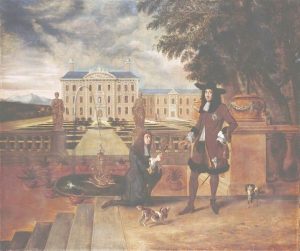 Here, the kneeling John Rose, the King’s gardener, presents Charles II with the first pineapple grown in England. Pineapples were extremely rare, and difficult to grow. We don’t know which house stands behind them, but there is a formal garden in the background and a Baroque-looking fountain with two writhing sea serpents supporting a nude Greek boy who is holding a spout shooting out water at a curious angle.  Charles II Presented with a Pineapple may have been painted to commemorate Rose’s death in 1677.

We can date the painting by the fact that Charles II shaved off his moustache in 1677 – and he is not sporting one in the picture. Note that he is wearing a knee-length jacket. I came across knee-length jackets a year or so ago whilst researching my Charles II: the Language of Clothes post. Charles had spent much of his exile at the court of his cousin, Louis XIV, the Sun King. Louis firmly believed that French fashion was the best in the world, and, whilst Charles always dressed in the height of fashion, he didn’t want his country – once he’d been restored to the throne in 1660 – to be a mere also-ran in the fashion stakes. So he invented the long, knee-length jacket which, he declared was English and more fitting for Englishmen as opposed to the short French waist-length doublet. The French laughed at the long jacket, and saw it as fit only for country bumpkins.

We note that John Rose is wearing a long jacket, too. However, we can also see the Charles’s shoes have red heels – and only men who had been received at the Court of Versailles were entitled to wear red heels. It rather looks as though Charles might have been ambivalent about jettisoning all French fashions. 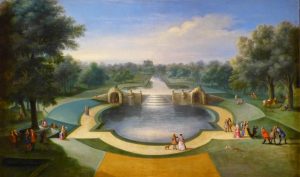 A View of the Cascade, Bushy Park, near Hampton Court, oil on canvas, from the school of Marco Ricci, 1715.

The 18th century garden was all about taming nature. You would never find such a cascade, surrounded by geometrical paths and hemmed-in stretches of water, in nature. It was important that the garden above was a man-made creation. The painting was probably commissioned to celebrate the visit to Bushy Park by Prince George, later George II and his wife, Princess Caroline of Ansbach. 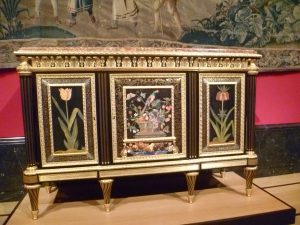 I love this wonderful Adam Weisweiler commode from 1785-90. This shows recycling at its most sophisticated. The commode actually includes three 17th century Florentine decorative panels with flower motifs, and it’s made of oak, ebony, hard stones, tortoiseshell, brass, pewter, mahogany, boxwood, purplewood, gilt bronze and brocatello marble. What is broccatello marble, I wondered? I looked it up. It looks like crushed up pinky-orange gravel – and its seriously classy.

Originally, the commode was made for King Louis XIV, and the Prince of Wales (later George IV) bought it in one of his post-French Revolution spending sprees for his new home Carlton House. There was a period in the late 18th century when furniture and paintings once belonging to exiled – or guillotined – French aristocrats were saturating the market and it was a good time to buy top quality objects at cut down prices; and the Prince of Wales let it be known to French dealers that he was interested.

I keep coming across furniture bought by the Prince of Wales for either the Royal Pavilion in Brighton or Carlton House in London. He obvious had a good eye – and, probably more to the point, he didn’t care if he ran into debt to get the items he wanted. 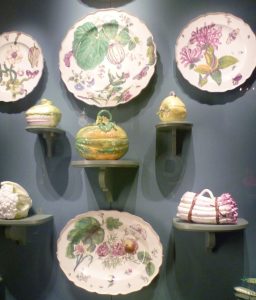 The exhibition also celebrated the arrival of thousands of new plants, starting as a trickle in the 16th century and becoming a flood by the 19th century. Plant designs now appeared everywhere: I just loved the display of Chelsea porcelain, made at the Chelsea factory in London, which accurately depicts some of the new exotic specimens coming into the country. Or perhaps Chelsea porcelain got their inspiration from the nearby Chelsea Physic Garden. I like the way the plates, bowls etc. show off the new plants so exuberantly – often allowing the flowers and fruit almost to fall over the edge of the plate.

Incidentally, modern replicas of a number of the Chelsea Porcelain items: cups and saucers, dinner plates, and so on, are for sale in the Queen’s Gallery shop. 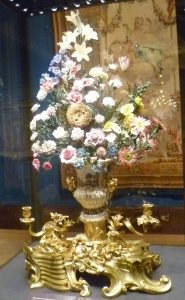 I was also very impressed by the gilt bronze clock in the form of a sunflower – the symbol of Louis XIV, the Sun King – which was placed in the centre of a bouquet of loosely arranged flowers in a Vincennes porcelain urn-shaped vase. The flower stems are made of green lacquered brass wire. The clock dates from the early 1750s, although, in fact, Louis XIV had died 40 years earlier. It shows how strong Louis’s influence over French court life was, that the ‘Louis Quatorze‘ style continued so many years after his death. 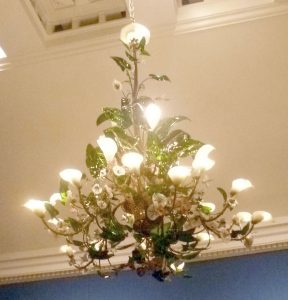 This beautiful chandelier was restored specially for the exhibition. The opaque lily and convolvulus flowers made of tinted glass in blue, pink and yellow and with green translucent leaves, fastened onto metal and gilt branches, came from Osborne House. It is thought that Queen Victoria saw it at the 1851 Great Exhibition, and bought it soon after.

Unfortunately, the chandelier was in bad way. Some of the petals were missing, others cracked or broken and the metal gilt wire hooks which held the leaves onto the branches were disintegrating. Very carefully, the whole thing was taken apart, repaired if at all possible, replaced if not, and then it was all put back together, re-wired and new light bulbs put in. I must say, it looks beautiful with the light shining through the leaves and petals. 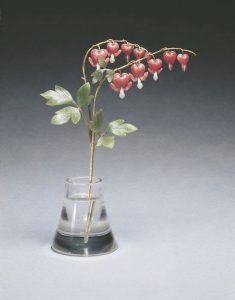 I’m ending with this exquisite Fabergé flower: the bleeding heart. I’ve seen a number of Fabergé flowers in various Royal Collection exhibitions over the years and, every time, I’m struck by their almost magical quality.

It’s time to come back to the present. I do hope you have enjoyed this glimpse into a different world. It’s certainly inspired me to go out into my very small city garden and prune my fuchsia into a more elegant shape!

Photos: Most of the photos are by Elizabeth Hawksley, except for the two credited to the Royal Collection Trust / © Her Majesty Queen Elizabeth II, 2020

8 thoughts on “Time-travelling in Royal Style – with Flowers”