Visiting the Rollright Stones in Oxfordshire in January with my daughter was a slightly spooky experience. Set in a field next to an ancient ridgeway with a wood nearby, these prehistoric stones still exude an air of power. The most important are ‘The King’s Men’, a Neolithic stone circle of over a hundred stones weather-worn into fantastical shapes (the exact number is unknown – legend has it that they are uncountable), dating from around 3000 BC. 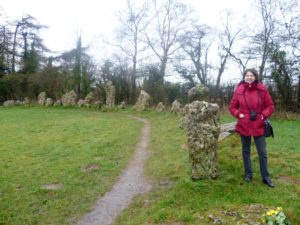 Me, standing by one of the King’s Men stones

The photo of me standing beside one of the King’s Stones gives an indication of height – I am 5ft. 7in. Note the yellow roses in the bottom right hand corner. There was no-one else there when we visited – mind you it was a cold January day, but there was plenty of evidence that people had been there and left offerings. 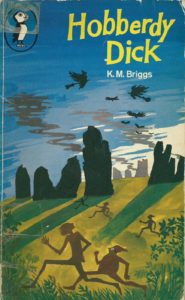 The reason we were visiting the Rollright Stones was because we both love Katherine M Briggs’s children’s book, Hobberdy Dick (1955) and we wanted to see the Stones, which are part of the story, for ourselves. Hobberdy Dick is a hobgoblin who lives in Widford Manor near the Rollright Stones in Oxfordshire, just after the English Civil War. Briggs was a well-known authority on English folk lore and she plainly knew about 17th century witchcraft’s link with the Stones. 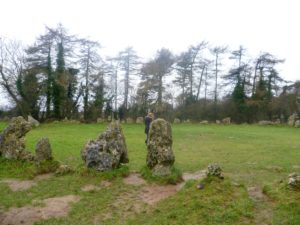 The King’s Men, another angle

Originally, the stones stood shoulder to shoulder and a portal on the south-east side is just discernible. The stones on the north-west are about a third higher and heavier – we don’t know why. 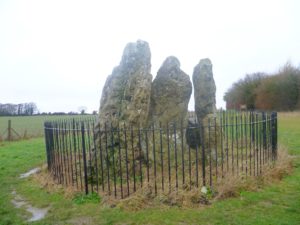 ‘The Whispering Knights’, the remains of a portal dolmen or burial chamber about ten minutes’ walk away at the far end of the field, is the oldest of the stone structures, dating from 3800-3000 BC. The three ‘Whispering Knights’ are the two massive portal supports together with another large leaning stone; the huge capstone which once sat aslant on top of the burial chamber has fallen down and isn’t visible in this picture. 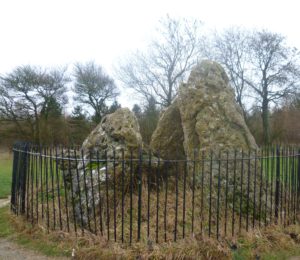 The Whispering Knights  – the other side

However, from the other side, it looks completely different; and here you can just see the fallen capstone at the back. We also spotted small gifts of rose hips, a flower or two and so on, tucked into some of the crevices. 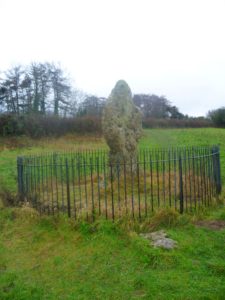 ‘The King’s Stone’, a large single standing stone, stands by itself in field next to the stone circle. In reality, it is nothing to do with the circle but was erected much later, around 1800-1500 BC, probably to mark a Bronze Age cemetery. The reason it has a notch on the left side is because in the 19th century people chipped bits off for luck. The railings are now there to protect it. 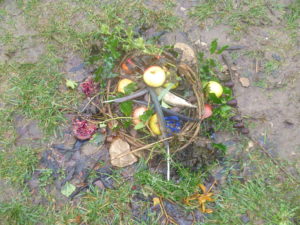 Offering in the centre of the King’s Men Stone Circle

What I love about the whole complex is that the stones are completely accessible – there is no Visitor Centre, no ticket office. They are there, in the field, next to a B road as they have been for thousands of years, and anybody can visit them at any time. There are numerous prehistoric burial chambers nearby, and the whole area must have been an important and significant site for at least two thousand years. 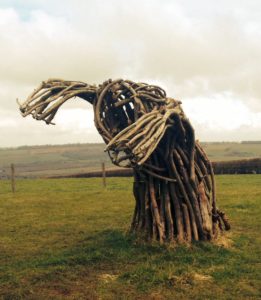 Naturally, legends about the site abound. One story goes that King Rollo the Dane passed by with his army on his way to conquer England. He met a witch who said:

If Long Compton thou canst see

King of England shalt thou be.

Rollo stepped forward eagerly but the witch raised a long mound in front of him and his view was obscured. She then turned them all to stone; the king by himself overlooking Long Compton, his men in a circle nearby and the five treacherous knights further off. Finally, she transformed herself into an elder tree. It is said that, at night, the stones comes alive and the King’s Men go down to the river to drink.

When we visited, the place was deserted but other visitors had been there very recently. In the centre of the circle lay a wreath of holly, ivy, pine cones, a pomegranate, some apples and some feathers, evidence of some sort of ceremony. Others, too, had left offerings of rose hips and berries elsewhere. What a setting for a novel, I thought.

‘This part of the world is a very witchy place,’ said my daughter. I could see what she meant. But we both agreed that, whatever may have happened here in the past, nowadays, walking around quietly among the King’s Men and visiting the Whispering Knights and the King Stone, the atmosphere was peaceful and benign.

The Rollright Trust, who looks after the place, urges to public to subscribe to the Sacred Sites Charter: Take nothing but photographs and memories. Leave nothing but footprints.

10 thoughts on “Witchcraft and the Rollright Stones”