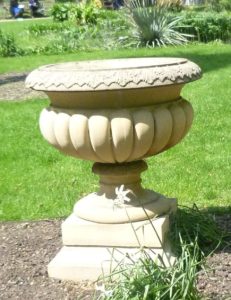 The site was chosen because it was south-facing, with good soil (the area had long been used by market gardeners). It was also easily accessible by river, so bringing in plants wouldn’t be a problem. In 1680, a young Irishman called Hans Sloane became an apprentice at the Worshipful Company of Apothecaries and trained to become a physician at the Physic Garden. 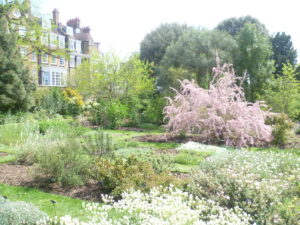 View over the Decotyledon Order Beds. These follow the traditional 19th century Bentham and Hooker plant classifications. I love the milky pink tamarisk in full bloom

After his graduation in 1687, Sloane travelled to Jamaica as private physician to the 2nd Duke of Albemarle. He returned to London in 1689 with a recipe for milk chocolate – which was shortly to become the rage – and a compound from the tropical tree Cinchona pubescens, better known as quinine, which both prevents and cures malaria. Once home, he set about making his fortune. 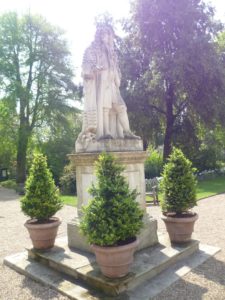 By 1722, he was rich enough to buy the Manor of Chelsea, which included the Physic Garden, and, in grateful thanks for his physician’s training, he rented the garden to the Worshipful Company of Apothecaries for a peppercorn rent of £5 p.a. – which continues to this day.  The Physic Garden became the world’s leading centre for botanical exchange. 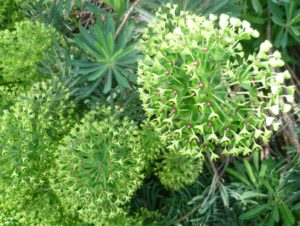 I love these bubble-like euphorbias

Sloane was a remarkable person. He was Secretary of the Royal Society; a Foreign Member of the Academy of Sciences at Paris, St Petersburg and Madrid; President of the Royal College of Physicians; and, after his death, his collections were purchased by the nation and became the nucleus of the British Museum. Queen Anne made him a baronet; and he has an underground station, a street, and a London Square named after him. 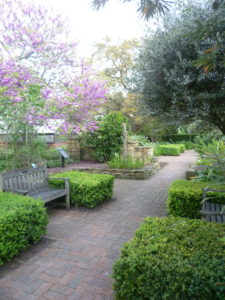 Garden of Medicinal Plants. I admired the 17th century formality here with the patterned brickwork and the square-shaped box hedging. The vivid purple of the Judas tree blossom is particularly striking

The advances of science, not to mention the encroachment of London, and the rising value of the Physic Garden’s land, lead to a number of financial crises over the next 200 years, and the Garden’s usefulness slowly became redundant. Somehow, it hung on until, finally, in 1984, with the help of friends, employees and supporters, the Chelsea Physic Garden Company was created as a registered charity which, at last, gave it a permanent and financially secure future. 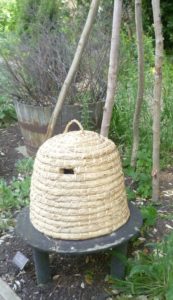 Traditional straw bee skep in a garden full of bee-friendly flowers; the humming of bees here is very audible

Today, Chelsea Physic Garden welcomes over 50,000 visitors a year. It  is set out in twelve themed gardens, growing a variety of medicinal and economically useful plants from the 17th century to today, both from Britain and abroad, and includes a number of endangered and rare species. I particularly liked the Garden of Medicinal Plants, the British Native Garden, the Garden of Useful Plants, and the Pond Rockery which was created in 1773 and is the oldest rock garden in Europe. 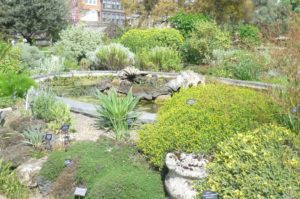 The pond rockery was created out of a number of curious materials: there are some carved stone cornices from the Tower of London, one of which you can just make out at the front, centre right, next to an euphorbia. Some chunks of black basalt, originally used as ship’s ballast, were brought back by Sir Joseph Banks from his plant hunting trip to Iceland. Basalt is covered in small holes – particularly good for plants that like fast drainage. There are also some fused bricks, once part of a Chelsea lime kiln; and, incongruously, two halves of a huge clam shell, brought back on the Endeavour from Tahiti by Captain Cook. 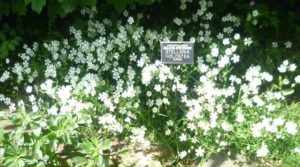 It’s a lovely place to visit, especially in May, with fresh green foliage on the trees, deliciously scented flowers, the hum of bees and plenty of benches to sit on. What particularly pleased me, as a country-bred child, was to see some of the humble wayside flowers I’d grown up with, like stitchwort, properly acknowledged. I don’t know their Latin names, but, I know stitchwort, alkanet or greater celandine when I see it, and I welcomed their inclusion in the garden. 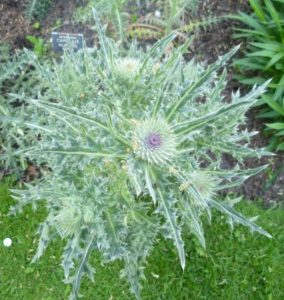 I also enjoyed the visual impact of many of the individual plants, like the thistle above. It looks a bit like a milk thistle; unfortunately, my photograph of the label came out too fuzzy for proper identification. 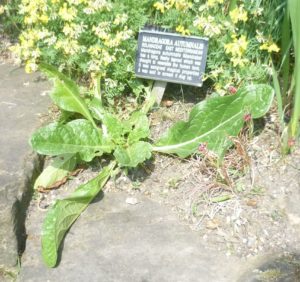 And, of course, being a novelist, not to mention a Shakespeare fan, I couldn’t pass the sinister and narcotic mandrake without an inward shudder. The label was restrained and said only Mandragora autumnalis (mandrake) has a long, fleshy taproot which was thought to resemble the human form. It was assigned magical properties & was said to scream if dug up, although that was alarming enough. I certainly wouldn’t want to risk digging it up.

I remembered Cleopatra in Shakespeare’s Antony & Cleopatra ordering her maid, Charmian: ‘Give me to drink mandragora… That I might sleep out this great gap of time/ My Antony is away.’  I was glad to get to the sobriety of the Cool Fernery. 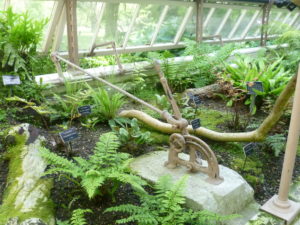 Window Lever in the Cool Fernery

The glasshouses in the Chelsea Physic Garden date back to about 1902. I was pleased to see in the Cool Fernery that the windows still opened and closed using the original mechanism. I liked the functional but pleasing-looking lever which opened the glasshouse window. You can see exactly how it works, and, if it ever went wrong, it surely wouldn’t be too difficult to fix.

It was a pleasure visiting the Chelsea Physic Garden – which also has a very nice café with both inside and outside seating, and an interesting shop. I thoroughly recommend it.  www.chelseaphysicgarden.co.uk