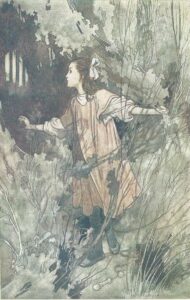 From a writer’s point of view, I am interested in the different narrative viewpoints in The Secret Garden and this is what I want  to look at.

But first, a brief synopsis for those who don’t know the book. Orphaned Mary Lennox, 10-years-old, rude, bad-tempered and plain, is brought from India to live in remote Misselthwaite Manor in the Yorkshire moors with her unknown uncle and guardian, Mr Archibald Craven. Lonely and bored, she wanders around the manor’s large garden, talking only to grumpy old gardener, Ben Weatherstaff who doesn’t have much time for her. She befriends an inquisitive robin who shows her the way into the secret walled garden which was locked up after her aunt, Mrs Craven, was killed when a branch broke, 10 years earlier.

Mary begins to help the spring bulbs there find the space they need to grow – and says nothing about her discovery of the garden. 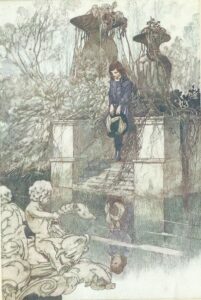 Mary wanders round Misselthwaite Manor’s garden, with its ‘large pool … an old grey fountain in its midst.’

She meets 12-year-old Dickon, a local lad with a broad Yorkshire accent, who knows all about wild birds and animals. Slowly, as they talk, she begins to open up. But her nights are sometimes disturbed by sounds of someone crying. She’s forbidden to explore but she does so anyway and finds Colin, a bad-tempered invalid boy of her own age, hidden away in one of the rooms. He’s Mr Craven’s son. After a number of furious quarrels, Mary and Colin make friends and they arrange for Dickon to push Colin to the secret garden – still keeping it a secret.

It’s a transformative experience for both children; Colin gets stronger and Mary gains in understanding. But what will happen when Mr Craven returns from his trip abroad? 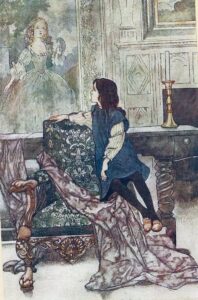 When it rains, Mary explores the house, which she’s been forbidden to do. She finds a portrait of a girl in an old-fashioned brocade dress holding a green parrot.

When I was 8, I liked the fact that Mary wasn’t pretty, appealing or a good-goody. Born in British India to emotionally distant parents, her father was too busy to remember her existence, and her pretty mother, a party-loving butterfly, preferred to forget that she had a child. Mary, an unattractive child, is brought up by an ayah and spoilt by the Indian servants. She is allowed get away with being selfish, bad-tempered and rude.

Nowadays, children’s writers are expected to write solely from the point of view of the main protagonist, seeing things from inside their heads, or at least sitting on their shoulders. What Hodgson Burnett does is different. Yes, she is inside Mary’s head for much of the time, and we see the world through Mary’s eyes, but the author also steps outside Mary’s head and tells us why Mary thinks the way she does. And because Hodgson Burnett isn’t censorious, I listened.

The heroines I was used to were good children, like the March sisters in Little Women. Mary, by contrast,was a sort of social pariah, operating by entirely different, completely self-centred rules – and that was interesting. A bit of me would have liked to behave as Mary did. 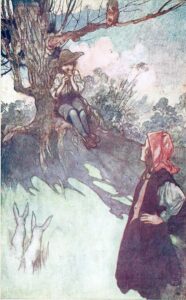 Mary meets Dickon; he’s sitting under a tree playing a rough pipe. Note the red squirrel sitting on a branch above him.

When Mary’s parents dies of cholera, she is sent back to England to her guardian, Mr Craven, who spends most of his time abroad; the truth is he doesn’t want to see either his ill son or his orphaned niece. Mary begins to ponder on the fact that, unlike other children, she’d never been anybody’s little girl. ‘She did not know that this was because she was a disagreeable child; but then, of course, she did not know she was disagreeable. She often thought that other people were, but she did not know that she was so herself.’

I liked the way that Frances Hodgson Burnett explained these sort of things.

The author also tells us what’s going on behind the scenes; for example, the sour housekeeper, Mrs Medlock, is sent to London to bring Mary back to Yorkshire. ‘Mrs Medlock hadn’t wanted to go to London … she had a well-paid place as housekeeper at Misselthwaite Manor and the only way in which she could keep it was to do at once what Mr Archibald Craven told her to do,’  even if it meant missing her niece’s wedding. 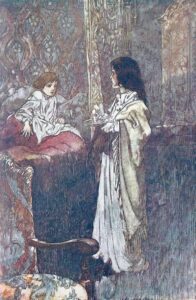 When Mary discovers Colin, both children are a bit afraid. ‘Who are you,’ he said at last. ‘Are you a ghost?’

The author does not beat about the bush: this is how servants are treated, she tells us – and I believed her.  I knew, aged 8, that adults don’t usually tell children things like that – but Frances Hodgson Burnett dared to spill the beans – and that made her special. She allowed me to know something about how things operated at Misselthwaite Manor which Mary herself didn’t know.

The Secret Garden is, in fact, written in three different modes: one, inside the head of the main protagonist; two, in the author’s own voice, commenting on Mary’s behaviour in a way which illuminates why she behaves in the way she does; and lastly, looking through a wider lens where she doesn’t gloss over awkward truths about how Mr Craven treats his servants, and how adults can have different agendas to the one they’re supposed to have  – like Dr Craven, who will inherit Misselthwaite Manor if Colin dies – which explains some of his awkwardness when treating Colin’s hysterical fits and temper tantrums. 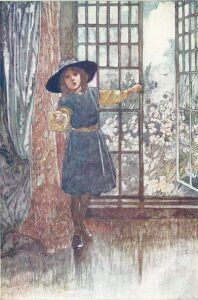 Mary flings open the window in Colin’s bedroom. ‘That’s fresh air,’ she said. ‘Lie on your back and draw in long breaths of it.’

One of the most important things which The Secret Garden gave me as a child was access to different ways of looking at the world, as well as new concepts. In many ways, The Secret Garden is a dark book. People die: Mary’s parents die of cholera; Colin’s mother (Mr Craven’s wife) is killed by a falling branch in the Secret Garden. Both children are left to struggle without love. Some children might find this depressing, or worrying, or frightening – particularly if similar things have happened to them.

I was well-aware that grown ups who should have been loving and caring, often weren’t, and that the grown-up world hid many secrets from children. And it was Frances Hodgson Burnett who taught me that I didn’t have to believe the ‘authorized version’ of events. I found that liberating.

Until I read The Secret Garden, I hadn’t realized fully – how much ‘pap’ children were fed. Adults told children lies, often;  they pretended that things were one way when, really, the truth was a quite different – sometimes, almost the opposite. It was Frances Hodgson Burnett who pointed this out in a way that I could understand, which makes her, for me, a special writer.

To turn briefly to the book’s illustrator, Charles Robinson (1870-1937) who illustrated the first English edition of The Secret Garden, published by W. Heinemann. He was the son of an engraver and illustrator, and a popular choice for upmarket children’s books, and he illustrated well over 100 books, mostly in the Aesthetic style – a softer version of Aubrey Beardsley. 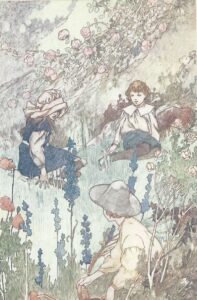 The three children inside the Secret Garden. Colin would lie on the grass “watching things growing.”

I have to be honest and say, I’m not entirely convinced by his illustrations, decorative though they be. All the same, I do think that Charles Robinson gets across something of the emotional unease which permeates the story. The children in the above picture are all sitting separately. It’s as if the secret, almost sacred, space of the garden allows them the room to heal – at their own rate. Dickon is the only one of the three children who is actively gardening. But then, he has a loving mother; he doesn’t need to be healed. 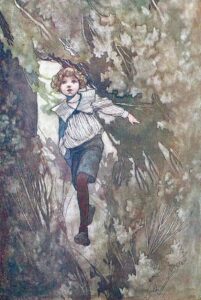 ‘A boy burst through it at full speed.’ Colin charges through the door of the Secret Garden – straight into the arms of his astonished father.

A final point. In most children’s books, it is the morally good people who are the agents for beneficial change for the book’s suffering hero or heroine. But neither Colin nor Mary are angels – like Marmee March, say. Colin is a tyrant, manipulating the servants who look after him through his hysteric fits and tantrums. And Mary is quite capable of screaming herself – in fact, she tells Colin that she doesn’t care if he screams – she can scream louder and for longer!

But, somehow, in spite of both children being deeply-flawed characters, Mary and Colin are able to help each other in a mutually beneficial way.

Illustrations for The Secret Garden by Charles Robinson

Elizabeth Hawksley wishes all her readers a Happy and Healthy Festive Season. She will return on January 3rd, 2021.