I have something of a love-hate relationship with hats. After my horrible boarding-school hat – which I jumped on when I left school for the last time – I avoided wearing hats as much as possible. Though I see from my About Elizabeth website page that I had a white straw hat when I was about seventeen in Paris being finished – but the straw began to unravel and I was pleased to have an excuse to ditch it. It smacked too much of ‘young lady’ and I was desperate to re-invent myself.

Later, when working in Fringe Theatre, I sported a rather nice white lacy wool beret. Alas, I washed it in a too hot white wash and it shrunk.

The hat I never wear

At the moment, I have six hats; and one of them is the one I never wear. There’s nothing wrong with it. When I bought it, I thought it would go with everything, but, somehow it didn’t and it was uncomfortable, beside. It definitely does not bring me joy. It’s now in my ‘to go to Oxfam’ bag – I’ve decided that it can bring joy to someone else. A pity, but there we are. 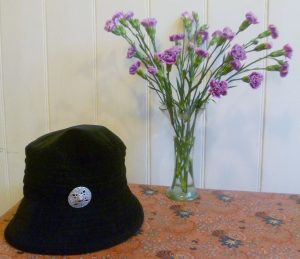 Fortunately, I do wear my current all-purpose hat from Monsoon. It’s black velvet and it goes with everything. Furthermore, it keeps the tips of my ears warm. I often dress it up with a brooch, usually my Celtic cross brooch from Iona as in the photo. I also have a red-felt flower brooch which works with the hat, too. 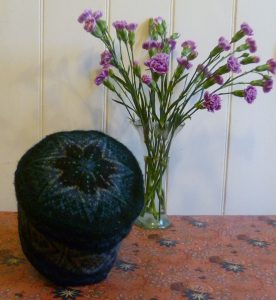 Then there’s my Shetland hat. I visited the Shetlands some years ago in early April and I hadn’t really taken on board just how far north it was. I’d imagined spring sunshine; what I got was snow. Fortunately, their tourist season hadn’t yet started and shops had sales of Shetland hats and woollens. I bought this hat (and two Shetland jumpers) and it’s wonderfully cosy and comes right down over my ears. I wear this hat a lot and, when I wash it, I do so carefully! 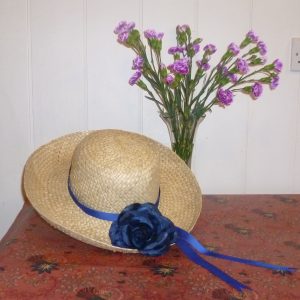 I have two sun-hats. There’s the one I bought in Rhodes many years ago. The friend I was with told me that it made me look like Virginia Woolf, which rather alarmed me. I have great respect for Virginia W., but I wasn’t at all sure I wanted to look like her on holiday. In any case, the wide brim made it susceptible to being blown off. I tried using a hat pin – which worked OK, but made me look even more Bloomsbury. Most of the time, this hat lives in my cupboard; it hasn’t quite got to the Oxfam bag stage yet but it probably will.

Perhaps I should send it to Oxfam with a label attached: You want to look like Virginia Woolf? Then this is the hat for you! 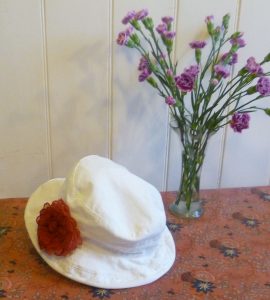 I bought a simple white cotton sun-hat to replace the Virginia Woolf hat in Cambridge Market. I really like this hat; it folds up neatly when packed and it doesn’t shrink when washed. I’ve customized it with a red rose fabric brooch. I’ve seen other people wearing the same hat and, this way, I can be sure that the hat I pick up in the trattoria/bistro/taverna after a meal is mine.

However, my pièce de résistance is the wonderful hat my cousin Noël Stewart, milliner extraordinaire, made for me for my son’s wedding. This is a hat which makes a definite statement – I love the curled ostrich quills, the romantic tilt of the hat and the large, blowsy rose – and I felt a million dollars wearing it.

Noël has designed hats worn by stars like Keira Knightly and Kylie Minogue; he has worked for the Queen’s milliner, Philip Sommerville. His hats are frequently photographed in magazines like Vogue. In 2015, he won the Accessory Designer of the Year Award at the UK Fashion and Textiles Awards, so I’m very proud to own one of his hats.

When I started this post, I discovered that I had six hats – which I photographed using a candlestick to prop them up on the kitchen table. I now realise that I only wear three of them regularly. It seems a pity but, although I don’t think that Noël would agree with me, I don’t think we are living in a very hatty age.

8 thoughts on “Hats: Have They Had Their Day?”