When I entered, the first object which caught my eye was the costume designs (1925),  commissioned by Bronislava Nijinska (1891-1972) for the ballet based on Stravinsky’s 1918 Ragtime, shown below, and designed by Alexandra Exter. I confess the picture gave me quite a shock. A nearby information board tellingly commented on British attitudes ‘moving from stereotypes descended from the minstrel show to a more nuanced understanding of and interest in African American and black British culture.’ 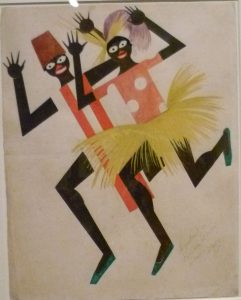 Although I appreciated the vivacity of Exter’s brightly-costumed figures, and could see how shockingly different they were from Classical ballet costumes with which the Ragtime choreographer Nijinska was familiar (her brother was the famous ballet dancer Vaslav Nijinsky ) they also, to my 21st century eyes at least, displayed racial stereotypes I felt very uncomfortable with.

1918 is now a hundred years ago and, as L. P. Hartley observed: The past is a foreign country: they do things differently there.  Exter and Nijinska were more likely to be thinking: Ragtime is exciting, liberated and daring and the costumes should reflect that. In 1918, women were still firmly corseted, and men wore neatly-buttoned suits and waistcoats. It would be physically almost impossible for them to enjoy the freedom of movement her dancers displayed. And, possibly, the stuffier members of society in 1918 thought the costumes disgusting and degenerate. 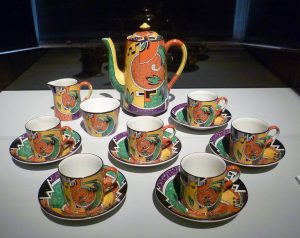 It wasn’t only music that was affected by jazz. Take this wonderful ‘Jazz’ coffee set by Royal Winton and Grimwades Pottery from the 1930s, with its vibrant colours and jazzy pattern – with, perhaps, a hint of Art Deco-Japanese. It would brighten up anyone’s day. And the cups look more generous than the traditional coffee set cup. You would get a decent amount of coffee. 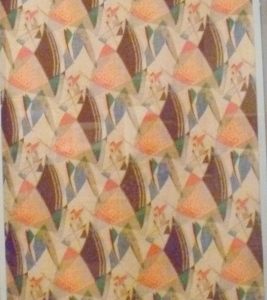 Wallpaper and textiles were also influenced by jazz. The vibrant example above can be best described as Art Deco meets jazz. It’s bright and a touch looser than more traditional Art Deco designs; one might call it almost syncopated. It’s as if people in the post First World War years were no longer content to ‘fade into the wallpaper’, or in this case, possibly curtains. 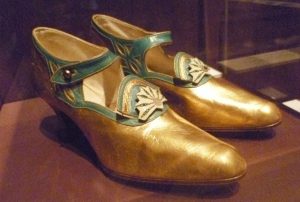 I was thrilled to see some jazzy shoes, too. Just look at these! To my amazement, this pair was made by the Co-operative Wholesale Society. I’d have thought them too frivolous for the respectable Co-op, but they do show just how pervasive the jazz influence was in the 20s with regard to colour and boldness. The owner may not have been able to afford diamond buckles, but she would jolly well flaunt the shoes’ twinkly diamante decorations as she danced the night away. These are definitely shoes Mother would not approve of. I wonder how much they cost. 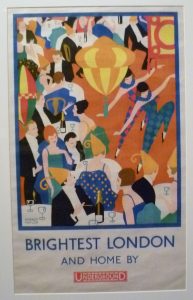 And when you’d finished dancing, there were the friendly lights of one of the new London Underground stations to take you home, perhaps to the newly-developed suburbia. The people depicted here have obviously been having a whale of a time. Two girls, dressed as harlequins, are dancing centre stage. There’s a celebratory party going in the foreground, with wine – possibly champagne – and a number of the guests are wearing orange pointed caps with what look like curled ostrich quills. Themed parties were the rage. My mother went to a Jungle Party in the 1930s; she wore leopard skin print briefs and skimpy top, and she had a stuffed leopard’s print tail that she pinned on. How I wish I’d asked her more about it!

Early jazz bands were made up of either black or white musicians, but growing interest in and appreciation of jazz gradually brought black and white musicians and audiences together. 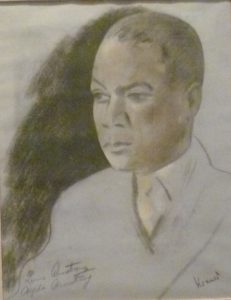 My final image is the fine 1937 pastel portrait of the renowned jazz musician, Louis Armstrong by Jacob Kramer. Kramer (1892-1962) was Russian born but lived most of his life in England. This sympathetic portrait shows the artist to be a respectful admirer of the sitter. We have come a long way.

Rhythm & Reaction: the Age of Jazz in Britain is at Two Temple Place, London, until 22nd April, 2018. www.twotempleplace.org And it has a great café, too.

My grateful thanks to Rebecca Hone and Alice Evans at Two Temple Place for their help.

4 thoughts on “2 Temple Place: Jazz. the Shock of the New”