I first met the quagga when I was about seven in an aquatint dating from 1804 by the painter Samuel Daniell in a book in my grandfather’s library called African Scenery and Animals. There was something about it which appealed to me – it looked a noble animal, standing in the South African veldt with wildebeest in the background – almost a creature of legend. I liked its unusual name, for a start. And it wasn’t quite like anything else I’d seen; almost a zebra with stripes at the front but becoming a sandy colour at the back, with a white underbelly, legs and tail. 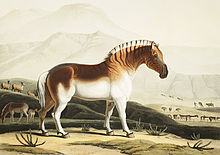 Quagga by Samuel Daniell, 1804, in ‘African Scenery and Animals’

My next encounter with the quagga – or non-encounter- was a couple of years later when my mother took me to the London zoo for the first time. The first animal we saw was the panda; my mother said, ‘Have a good look at the panda, darling. It’s very rare and you may never see another one.’  Much impressed, I looked at it. And then she said, ‘What would you like to see now?’

I have never forgotten my feeling of outrage and disbelief in learning that I couldn’t see it – I could never see it – because it was now extinct. There weren’t any more. I thought, but it’s there, in Grandpa’s book. How could it just have vanished? 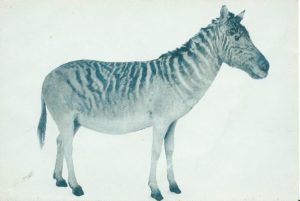 The next time I met the quagga was in my twenties in the Zoological Museum in Tring and here it is. And, curiously, it looked different from Samuel Daniell’s 1804 quagga. It was smaller and it had indistinct stripes on its face, neck and along its back. The underbelly and legs, though, were white. I felt sorry for it – it looked as though it had been downgraded. 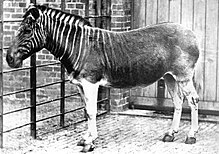 When I came to write this blog, I tried to get a more up to date photo of my faded postcard from the Zoological Museum in Tring but, even more curiously, it had disappeared altogether and what they offered me was the one shown above – the very last quagga in London zoo, dating from 1870. It is plainly not the same quagga as the one in the Tring museum. So what is going on? I suspect the answer may be that the Tring Museum now thinks that their animal may not be a true quagga after all. In my research I came across some information about 19th century cross-breeding. We know that crossing a horse and a donkey produces that useful creature, the mule. But the mule is sterile. But I also came across information about quaggas and zebras being cross-bred with donkeys – and this is what my faded photo may be. It does have a donkey look about it.

In fact, the more I searched around for pictures of quaggas, the more they seemed to metamorphose into different-looking animals.

Quagga by Nicolas Maréchal from the royal zoo at Versailles, 1793

I came across this splendid 1793 picture of a quagga by Nicolas Maréchal; it lived in King Louis XVI’s zoo at Versailles. This quagga looks much more like Samuel Daniell ’s quagga; it has the trademark stripes on the head and neck, the sandy-coloured body and the white legs and tail. In fact, it also has the sort of French elegance one might expect from a quagga who lived at Versailles; its coat was plainly designed by a top couturier.

1793 was the year when Louis XVI went to the guillotine; so what happened to the quagga and the other animals in the royal zoo? Were they just killed and eaten?

A 1793 decree from the National Assembly required all privately owned exotic animals, together with the animals in the royal zoo to be transferred to a new zoo opened in the Jardin des Plantes. Its founder, Jacques-Henri Bernardin de Saint-Pierre, believed that the public should be educated about exotic animals and they should be shown in their natural environment, and, in keeping with the Revolution’s principles of access for all, visitors got in for free. St Pierre also believed in vegetarianism and in proving God’s existence through the creatures he created, so I hope the quagga survived.

Then a couple of years ago, I visited Apsley House, the London home of the Duke of Wellington where, quite unexpectedly, I came across a magnificent pair of Sèvres porcelain vases, made in 1814, one of which was decorated with a quagga! I can’t tell you how thrilled I was. The card underneath recorded that the quagga was taken from the very same painting by Samuel Daniell  – even to the mountains in the background and the wildebeest in the distance – which I’d first seen as a child in my grandfather’s library. I was beginning to see that, in the early 19th century at least, quaggas were known about.

To take another example, a Mr Joseph Wilfred Parkins of London enjoyed cutting a dash in 1819 by driving round Hyde Park in his phaeton pulled by two male quaggas. (I hoped to track down a contemporary print depicting this but, alas, so far, I can find nothing.) However, I did find out a little more about Mr Parkins. He was appointed one of the two Sheriffs of London in 1819 – an annual appointment. This meant that he was a member of one of the City Livery Companies and he would have been elected in the medieval Guildhall by the City Livery Companies themselves. It was a prestigious post and Mr Parkins was obviously ambitious. Being Sheriff of London for a year could be a stepping stone to higher things, like becoming Lord Mayor of London. A sheriff’s duties were mainly ceremonial. For example, he would be expected to assist the Lord Mayor of London in his duties, or to attend sessions at the Central Criminal Court if called upon to do so. 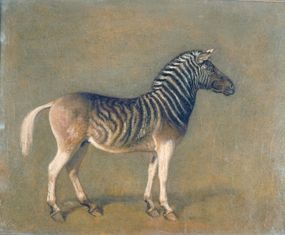 And then I hit gold. In the early 19th century, there were a number of private anatomy schools which had museums attached where medical students could learn about anatomy first hand. One of these was Joseph Brooke’s Museum in Great Marlborough Street which housed the two skeletons of Mr Parkins’ quaggas, together with the above painting. Sadly, the building was bombed in 1941 and the skeletons were lost. The quagga in the above painting has more stripes along its body than one would expect but I suspect that there might be more variation with regard to quaggas’ markings than has been allowed for.

What I like about M. Agasse’s quagga is that it manages to be both noble – like the Maréchal and Daniell quaggas – and still look like the everyday quagga that we see in the 1870 photo from the Zoological Gardens in London.

This, however, is not the end of the quagga’s story. In 1984, the quagga’s DNA was successfully extracted from one of the twenty-three stuffed quaggas in existence. We now know that the quagga was not a separate species; it was a sub species of the Plains Zebra with whom it shares about 60% of its DNA.

In 1987, the Quagga Project was set up in South Africa by Reinhold Rau to try and re-create the quagga by back-breeding selected Plains zebras. Their website is well worth looking at – and there is even something to click on to hear what the quagga sounded like – apparently its name is onomatopoeic and sounds like ‘quagga’. It doesn’t. It sounds like a demented donkey imitating a rusty saw.

The new generation of zebra/quaggas may look like quaggas, but their DNA remains that of a Plains zebra. The technology to recover extinct DNA for breeding does not yet exist. But one day  that may change…

12 thoughts on “Losing the Quagga”