Earlier this week, I visited what is surely the most astonishing landscape garden in England: Painshill, near Cobham in Surrey. It was built by the Honourable Charles Hamilton (1704 –1774) in the eighteenth century. Hamilton was intoxicated – there is no other word for it – by the Classical ruins and Gothic architecture which he’d seen on the Grand Tour. Once back home, he set about buying land in Surrey and started building dramatically ruined follies and then creating a spectacular landscape around them to show them off to their best advantage. His fantastical creation was, and is, unlike anything else in Europe. 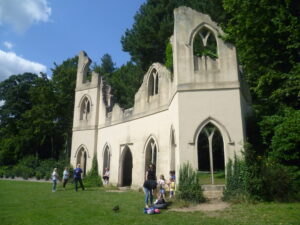 Ruined Abbey: all it needs now is ivy, moonlight and an owl!

Where else can you see a Ruined Abbey on the banks of  a river; or a wooded hill crested with a Gothic Temple and a spectacular view over the carefully constructed Serpentine Lake; or a magical grotto with crystal stalactites designed to catch the rays of sunlight and send a shimmering light over the grotto’s walls and much, much more? 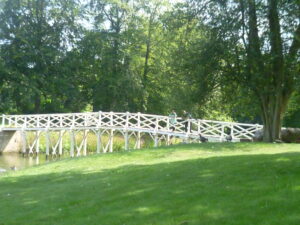 The Chinese Bridge: a must in the 18th century

After World War II, Painshill and its spectacular ruins fell into decay but, in the nick of time, rescue appeared: the Painshill Park Trust was set up in 1981 to restore the landscape together with its buildings to their former glory, taking care to use only plants and ways of construction that Hamilton would have known. 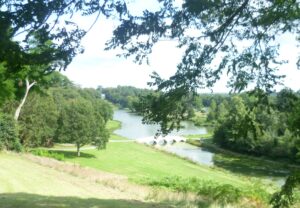 The views are splendid whichever way you look

Everything: the Serpentine Lake, the planting and its romantic, not to say, whimsical buildings were specifically designed by Hamilton to please the eye from every angle. And the 21st century visitor is encouraged to follow the path which Hamilton’s own visitors took which entails visiting each folly before pausing to admire the carefully constructed view around it for the full emotional effect. 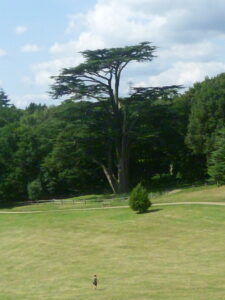 Cedar of Lebanon: you can judge the scale of the tree by the woman standing at the front

Hamilton chose his plants carefully: for example, the Alpine Valley is full of firs and conifers; there are cork oaks – the bark was harvested for corks for bottles of wine from the Painshill vineyard which slopes down to the lake. A number of the spectacular cedars of Lebanon which Hamilton planted have now reached their full maturity, and look wonderful. 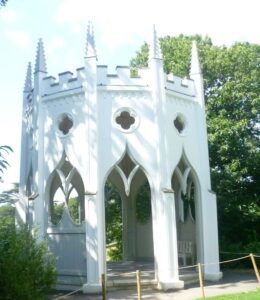 Having admired the Ruined Abbey, the visitor then climbs up a steep path with the vineyard on one side and reaches the Gothic Temple (which strikes me as a somewhat contradictory name – surely temples should have domes?) The temple is hexagonal with seats around the sides – when I visited, a young woman was sitting reading – poetry, I hoped. 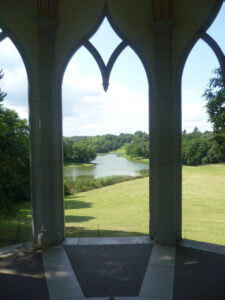 The view from the Gothic Temple’s arched window

The view, as you can see, is spectacular. The Serpentine Lake draws the eye; through the section of the right-hand arch, you can just see the leaves of the magnificent cedar of Lebanon; and through the central window, if you know where to look, you can spot the tiny white curved shape of the Turkish Tent among the greenery – which the visitor will come to later. 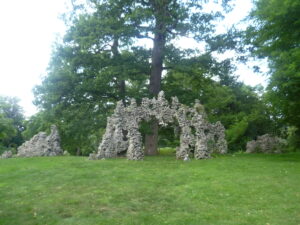 You leave the Gothic Temple and wind down the hill to the lake, passing an intriguing arch of oolitic limestone before entering the eerie but magical Grotto. In Greek Mythology, grottoes were natural portals to the Underworld, and the Painshill grotto, which comprises interlinking chambers lit by a seemingly eerie light, makes the idea of entering the Underworld half-believable. 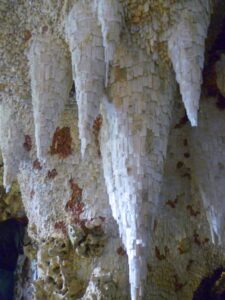 Grotto: every single one of the crystals has been carefully placed there by hand. Surely, a nymph bearing a glass of nectar will appear at any moment!

In 1760, Joseph Lane – the top man for the job – was commissioned to construct it: the outside was built of ‘bricks’ of oolitic limestone (the name comes from the Greek, meaning ‘fish roe’ which it is supposed to resemble; personally, its tiny holes-in-bubbles look reminds me of Rice Krispies!) Inside, the grotto’s roof was lined with stalactite-shaped wooded cones hanging down from the ceiling. Lane cut and shaped calcite, gypsum, quartz and fluorite crystals into shards and glued them to the wooded cones at an angle which allowed them to catch any light coming in. 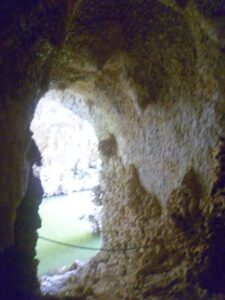 The Grotto has several ‘windows’

Various ‘natural’ holes allowed rays of sunlight to catch the crystals on the stalactites which created a shimmering light effect. Quartz, fluorite and amethyst crystals are naturally variously coloured which adds to the magic. 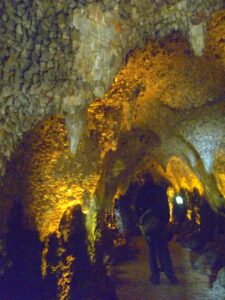 I have no idea how the golden grotto above was created – but it certainly makes a statement! When I first looked at my grotto photos, they were too dark to see much. Once I’d lightened them a bit, I was amazed to see that other people had been present, too! 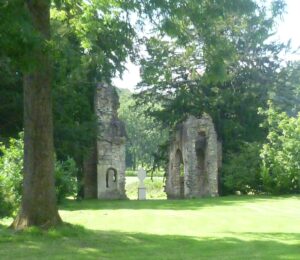 The Mausoleum was originally designed to show the transience of life – it resembled a ruined Roman Triumphal Arch and it is surrounded by dark yew trees which add to the melancholic atmosphere. A painting from 1773 shows that the mausoleum was originally arched and the niches were once filled with cinerary urns and antiquities. I nearly tripped over a half-buried tombstone. 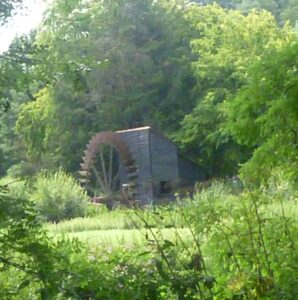 The original waterwheel was built in 1752 and its job was to pump water up from a well to feed the cascade, a water feature nearby. A new Bramah Wheel was installed in the 1830s to feed the cascade (which was dry when I visited) and it also supplied water to a complex system of pipework across the site – presumably feeding fountains and so on. It is now regularly maintained by a volunteer group called the ‘Gentleman Greasers’. 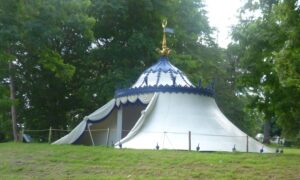 At last! The Turkish Tent

The Turkish Tent was the last stop on the original 18th century garden tour. It was built in 1760 as a brick oval with a brick floor with a canvas tent. The elaborate cornice was made of papier maché. Initially, there were chairs inside so that visitors could sit and admire the view. Today, there is a bench from which you can see both the grotto islands beside the lake, and the Gothic Temple on its hill, surrounded by magnificent trees. 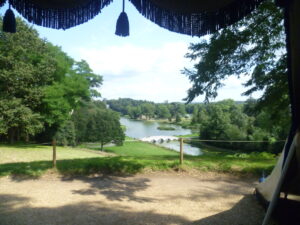 View from inside the Turkish Tent looking out

The original Turkish Tent had almost completely disappeared by the time restoring Painshill came on the agenda. Fortunately, there was a helpful drawing from 1779 of the tent – and, when excavated, the brick floor which once marked its footprint was still there. However, the 21st century building had to be constructed from something more solid. The cornice and the canvas were replaced by glass fibre – the swags still look elegant and it’s far lower maintenance! 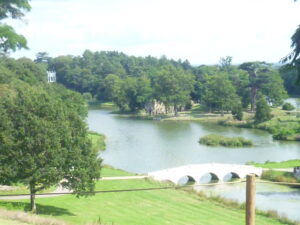 According to John Parnell’s 1763 description of the original tassels on the tent, they represent: ‘a blue fringe drawn up before in festoons like Darius’s tent.’ King Darius III of Persia (336-330 B.C.) was eventually overthrown by Alexander the Great. I was interested to note that Parnell knew Greek and Latin (which, of course, he would have learnt at Public School) and that somewhere he must have come across a reference to the decoration of Darius’s tent and felt that it was dramatic enough to be copied! 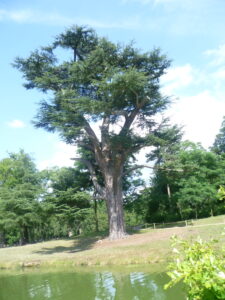 By this time, we had covered about two thirds of Painshill Park; we’d walked several miles and climbed several hills in the sun, and we decided that the delights of the Elysian Fields, the Hermitage, and the Gothic Tower would have to wait for another time. So we headed back towards the Painshill ice cream stall with its delicious selection of ice creams – and home.

All photographs by Elizabeth Hawksley

7 thoughts on “Painshill: A Gothic and Romantic Landscape”