To begin at the beginning: the definition of ‘merry-go-round. When I was a child we called them roundabouts: those colourful rotating machines with pairs of brightly-coloured horses you sat on which went round and round and up and down whilst you held on to the pole which went from the roof, through the horse’s withers, and was screwed into the floor. 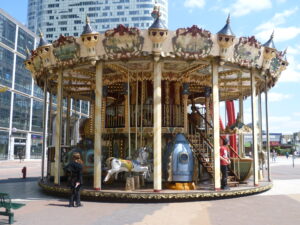 But when I googled roundabout, all I got was an unhelpful photo from somewhere up in the stratosphere showing me where the A15 crossed the A631.

The French word for the merry-go-round is carousel. However, in English a carousel is the machine at the airport which delivers your checked luggage and goes round and round an oval track (the carousel) until you spot your suitcase and remove it.

The only word left which is not subject to misinterpretation is ‘merry-go-round’ – hence, my title. But my post this week takes place in Paris so I shall use ‘carousel’. 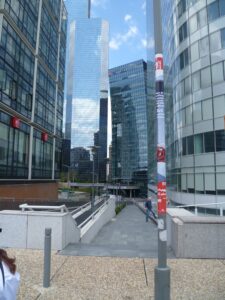 La Défense. I like the way that one of the skyscrapers has a wall covered with mirror glass. Note how it reflects the passing clouds.

Some years ago, I spent a short holiday in Paris exploring ‘little known Paris’, which included La Défense, Paris’s huge post-war business district, three kilometres west of the city’s limits. General de Gaulle, we were told, was anxious to rebuild the bombed capital after the Second World War but, at the same time, he didn’t want to destroy the pre-war 18th and 19th century centre of Paris.

His answer was La Défense which, with its soaring ultra-modern skyscrapers and vast public spaces is certainly impressive. And there’s a viewing platform at the top from which you can see for miles. 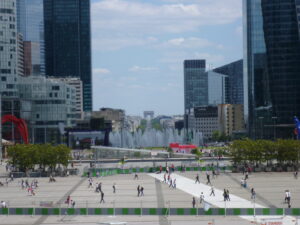 La Défense. This is a close-up looking at the very end of the axis on which La Défense was built. The fountains are playing and, in the distance, centre stage, is the Arc de Triomphe

I couldn’t help wondering what London would have looked like if we, too, had banned the building of skyscrapers in the City of London and, instead, restored most of the buildings reduced to rubble by the Blitz. It would have given us back the view of St Paul’s dome as it was meant to be seen, for a start.

However, back to Paris and La Défense – which is where I first saw the carousel. 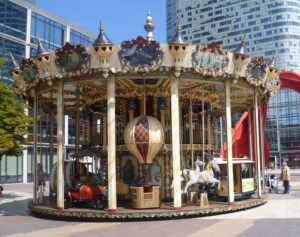 The other side of the carousel. Its theme seems to be old-fashioned transport: on the extreme left we can just make out an old gypsy caravan with its rounded top – which is pulled by 2 horses; a bright red 1920s racing car; a sky balloon from Jules Verne’s ‘Around the World in 80 Days’, two white horses and an old-fashioned tram. There’s plenty of choice.

The carousel, which was standing in a corner of the huge public area in La Défense fascinated me and I went over to examine it. It was a far cry from the roundabouts of my childhood. 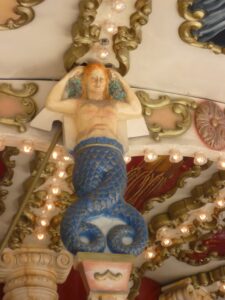 French carousels are much more sophisticated than their English counterparts. The cartouches depicting scenery which decorated the top of the French carousels looked 18th century – they might have been copies of country scenes by Poussin, say.

The double tailed mermaids were popular architectural features throughout Europe, including France, during the Renaissance and symbolized the duality of the female, (half-angel, half serpent) amongst other things. I somehow can’t see an English roundabout decorated with paintings by Sir Joshua Reynolds or Thomas Gainsborough, indulging in Renaissance caryatids. 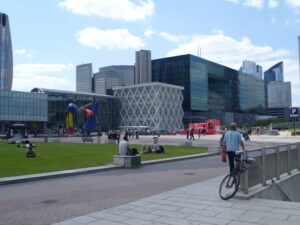 La Défense: looking in the other direction

Note here the expanse of grass with people sitting on it. The carousel I have been photographing was off stage on the right. (If I’d realized that I’d need a photo of it in its wider setting, I’d have taken several steps back and included it in the photo – unfortunately, I didn’t.) 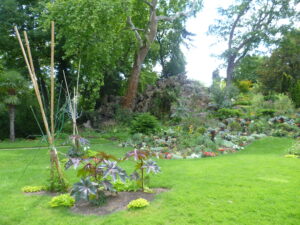 We also visited the Parc Monceau where one of the things I noticed immediately was that it contained another similar but smaller carousel to the one in La Défense. But more of that in a moment.

When I googled the Parc Monceau to remind myself about it, I learnt, to my amusement, that it was contemporaneous with the 18th century Landscape Garden at Painshill which I posted about last week and, moreover,  the Parc Monceau was created as ‘an English garden’ and it, too, was full of follies – including romantically ruined buildings, and several Turkish Tents! Though most of the Monceau follies have now been demolished – a  watercolour of the Turkish Tents show them to have had onion-shaped domes – very different from the Painshill Turkish Tent. Nowadays, the Parc Monceau is an attractive small park, and one which is popular with couples wanting a wedding photo opportunity. 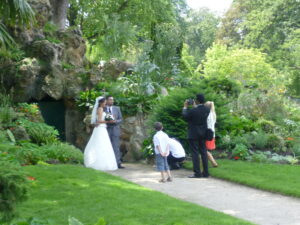 However, as I said, it also had another, smaller carousel. 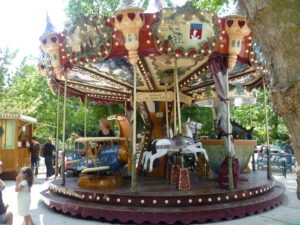 The Petit Prince carousel, Parc Monceau. The ice cream stall on the right sold the most delicious ice cream!

The carousel in the Parc Monceau is, extraordinarily, a literary carousel. It commemorates at least two French writers, both of whom wrote for children/young people. Antoine de Saint-Exupéry (1900-1944) was a poet, a journalist, a pioneering aviator who survived innumerable plane crashes, and a French war hero. His novels included Le Petit Prince (the Little Prince) which almost instantly became a French children’s classic. Saint-Exupéry was killed in action in 1944.

We can see Le Petit Prince’s bi-plane on the right of the carousel with his name on it. In the novel, le Petit Prince travels the universe to gain wisdom: a young philosopher hero – very French! 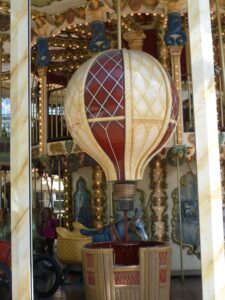 Jules Verne’s Air Balloon from ‘Around the World in 80 Days.’

Another French author whose stirring adventure stories are much loved is Jules Verne (1828-1905). His balloon, used by the hero of Around the World in 80 Days, is on the La Défense roundabout, and we can see Verne’s portrait at the top of the Parc Monceau carousel.

Verne also wrote ‘20,000 Leagues Under the Sea’ and the submarine on one of the La Defénse carousels is almost certainly Captain Nemo’s Nautilus from that novel. Readers who are more familiar than I am with Verne’s novels may be able to identify other modes of transport from Jules Verne’s books on the carousels.

The moral of this blog is that there is always something interesting to discover in the most unexpected places – and that things link up.

6 thoughts on “Paris and its Merry-go-Rounds”