Her father wrote to his anxiously waiting mother, Queen Charlotte: ‘The Princess (of Wales), after a terrible hard labour for above twelve hours, is this instant bought to bed of an immense girl, and I assure you notwithstanding we might have wish’d for a boy, I receive her with all the affection possible…’

His concern for his wife was short-lived; the day after Princess Charlotte was born, he removed his new daughter to an establishment of her own, supervised by the Dowager Countess of Elgin. Charlotte saw her parents – separately – once a week and occasionally visited her grandparents, King George III and Queen Charlotte, at Windsor Castle or at Weymouth. It was not a happy situation for a child.

It is good to report that her grand-mother, Queen Charlotte, thought her ‘a dear little girl’, and her grandfather, King George III, enjoyed playing with his grand-daughter on the carpet.

Charlotte became the centre of a tug of love as each parent tried to influence her. She loved her wildly indiscreet mother but could not respect her; and respected her father but could not love him. She seems to have been remarkably clear-sighted about them both: ‘My mother was wicked but she would not have turned so wicked had not my father been much more wicked still,’ she wrote.

The Marriage of Princess Charlotte and Prince Leopold of Saxe-Coburg at Carlton House, May, 1816, courtesy of the National Trust.

Knowing that her wayward mother needed protection from her father’s malice must have placed a heavy emotional burden on her when she reluctantly agreed to marry William, Prince of Orange in 1813. She was deeply concerned about what would happen to her mother if she, Charlotte, had to live in Holland. When she learnt that that was what her father, now Prince Regent, intended, she broke off the engagement. He was furious and put her under what was, more or less, house arrest.

Fortunately for Charlotte, her mother fled to Italy with her lover. Charlotte was deeply upset by her mother’s elopement but it also set her free to have a life of her own. In May 1816, she married Prince Leopold of Saxe-Coburg, a popular match in Britain. The nation, increasingly fed up with the Prince Regent’s extravagances, now had a focus for their hopes for the future. It was also a happy marriage for Charlotte and Leopold personally. They set up home at Claremont House, near Esher. 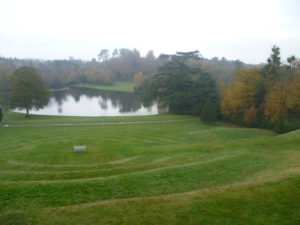 The house, originally built as a country retreat by Sir John Vanburgh, had had a number of notable owners, including Clive of India. The first formal garden there was designed by Charles Bridgeman, who built the three acre amphitheatre. 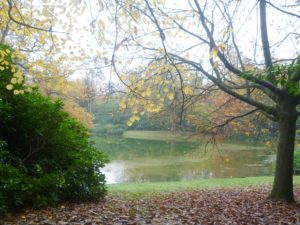 When informality became the rage, William Kent redesigned the gardens around a serpentine lake. Lastly, Capability Brown rebuilt the house and re-located the main road to Portsmouth to give the estate more privacy. 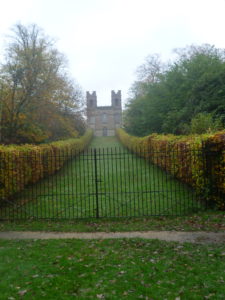 Charlotte and Leopold both loved the gardens. They built a camellia greenhouse and planned a tea house with views over the lake. There is a belvedere tower from which they could see London and Windsor Castle on a clear day; a grotto; a small pavilion on the island in the lake; a bowling green; a skittle alley; and lots of winding walks leading to unexpected vistas. A quote engraved on the back of one of the benches says it all: ‘A constant and never-failing source of amusement. Princess Charlotte & Prince Leopold, 1817.’ 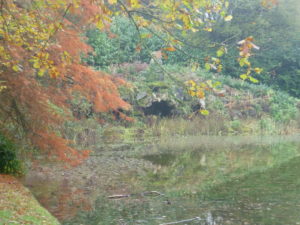 The lake and entrance to the grotto

Alas, Charlotte had tragically little time to enjoy it. On 5th November, 1817, after a fifty hour labour, she gave birth to a stillborn son and died the following day. The tea-house was never built. 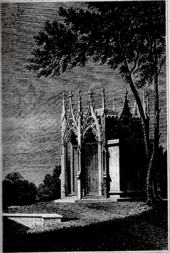 Princess Charlotte’s mausoleum. She and her stillborn son were buried in St George’s Chapel, Windsor. Courtesy of the National Trust.

Her sorrowing husband built a Gothic mausoleum on the spot. Sadly, it was demolished in the 1920s and all that remains now to mark the place is a slab of concrete on which is engraved, My Charlotte is gone. Prince Leopold.

14 thoughts on “Princess Charlotte and Claremont”