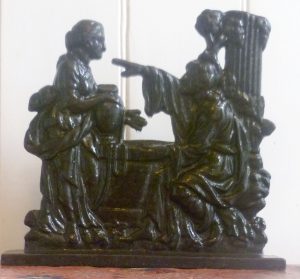 I always rather liked the Figures by the Well door stop. I used to think it was Isaac and Rebekah at the well: (Genesis Ch. 24), or possibly Jacob and Rachel at the well: (Genesis, Ch. 29). Wells were obviously important places in Old Testament times when camels, sheep and goats needed to be watered; and my Primary School’s day always began with an hour’s Bible Study (from the King James’s Bible, naturally) , so I knew all the stories.

Nowadays, I wonder why the man by the well is pointing an accusing finger at the woman who looks as though she is trying to defend herself. Surely they can’t be Isaac and Rebekah, or Jacob and Rachel; both of those young men met and immediately fell in love with the beautiful girl who offered him a drink from her pitcher and gave water to his animals.

Looking at the woman’s costume, the scene looks as though it’s been taken from a 17th century Dutch painting. But whatever the door stop represents, it was plainly a well-known story (sorry!). And I still have no idea why my family home had so many of them. 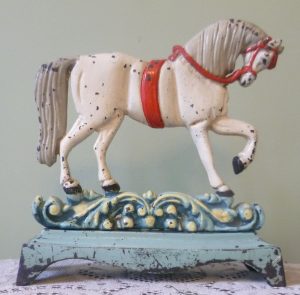 This horse door stop was given to me by a much-loved aunt, and she painted it especially for me – she was a  talented amateur artist. I’ve always liked it; I particularly like the clever way she highlighted the foliage on which the horse trots. I had it in my bedroom as a child. 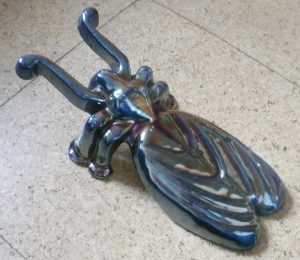 The only other item I have which, on occasion, acts as a door stop, is my beetle boot-jack. This is still useful in the 21st century for removing muddy boots, especially if you live in the country. But boot-jacks can also hold doors open, if necessary. The sloping back end of the beetle fits snugly under a door and holds it open very efficiently.

I still find it curious why some items which were once ubiquitous, have suddenly became redundant. Do we not need to doors to stay open anymore? Or, more logically, why did every room once need one?