I am lucky enough to sleep in a four-poster bed. It dates from around 1850 and is 5 ft 6 ins wide, 6 ft 8 ins long, and nearly 8 ft high. Fortunately, my terraced 1820 house has high ceilings. The bed has a roof canopy, a curtain behind my head, side curtains which remind me of sails on a tea clipper, arched pelmets around three sides at the top, and three lower valances which cover from  the bottom of the mattress to the floor. Sleeping in it is like being on board a galleon. 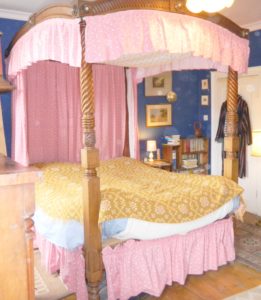 The sailing ship feel comes partly from the bed being higher than modern beds; the mattress is 2 ft 9 ins off the floor. When my daughter was little she wanted to live under the bed. It’s perfectly possible to crawl underneath and, once upon a time, it would have housed a truckle bed for a servant or child. Nowadays, a number of suitcases, clothes boxes and my Christmas decorations live there.

The oak roof frame has a walnut cornice elegantly curved and decorated on the outside and the two posts at the foot of the bed are also carved walnut. Walnut is a hard wood and difficult to carve, and the barley sugar twists of the posts demonstrate that the bed, whilst not being of stately home status, is a classy one.

The whole bed comes apart (think IKEA 19th century style). The last time I moved it (from the first floor to the second floor), it took about four hours to dismantle and reassemble. The base oak timbers slot together neatly and are secured to the four upright posts by long bolts – with their own, specially-made screwdriver.

When not in use, the screwdriver, which look like a fork with the two middle tines missing, hangs by a piece of string under the bed – as it has done for over 150 years.  The bolt holes are cunningly hidden under the rectangular carved panels which you can lever out with a bent pin, and then push back into place.

The roof frame also slots together and there is a spike at the top of each post which the frame fits onto – this bit is fiddly (it’s 8 feet up) and usually entails a fair amount of cursing – I use a small step-ladder. Originally, the bed had a horse hair mattress but, after 150 years or so, it was decidedly lumpy, the curls of horse hair came through the frayed 19th century ticking, and it gave me asthma, so it had to go. I now have a comfortable modern mattress. 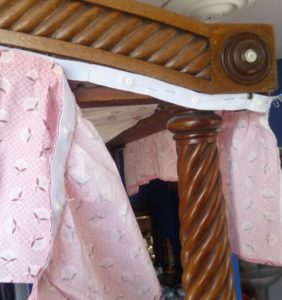 The pelmet in the process of being put up. You can see the tape tacked to the wood and the half of the press stud. Note the barley sugar twists of the walnut posts

The annual wash, not to mention hanging everything back in the right place, is quite a chore – at least I have the benefit of a washing machine and a modern iron, unlike a 19th century housemaid. 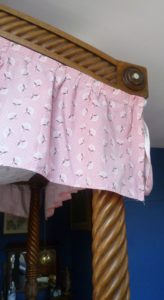 The pelmet curtain in place

When I inherited the bed, the curved roof pelmets were held in place by tacks, and the wood underneath was pitted with over a century’s worth of holes where the tacks had been hammered in and then removed when the curtain pelmets were washed. I needed to come up with an alternative way of fastening the pelmet to the wood. I thought of using velcro but in the end I used a double tape with plastic press studs. a building friend stapled one side of the tape to the wood (a bit hap-hazardly) and I sewed the matching tape to the curtains, taking care that the press studs met properly.

I love sleeping in  my four-poster and I write whilst sitting comfortably propped up with a cushion against the headboard. And, of course, if I ever need to feature a bed in a novel (and which novelist doesn’t!) I only have to look at my four-poster for inspiration.

6 thoughts on “Sleeping in a Four-Poster Bed”