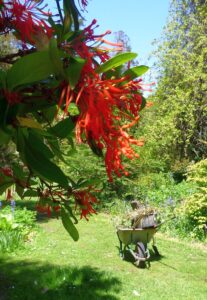 Lady Londonderry was a a fascinating woman: a renowned political hostess; a supporter of Women’s Suffrage; the first woman to be appointed a Dame Commander of the O.B.E, in the Military Division, in 1917; the first woman magistrate; together with many other honours. Her achievements deserve a blog of their own but today I’m concentrating on her enchanting garden. 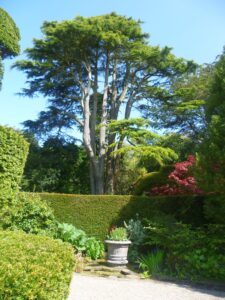 She loved magnificent trees, too.

Lady Londonderry, who had been a suffragette, wanted equality in her garden. Here, ordinary, common plants arrived of their own volition. Lady Londonderry had no objection. Daisies and buttercups were welcome to grow next to exotic flowers from the Far East, for example. All that was required of them was that they fitted in; if they were happy where they were, and their colours and looks complemented the flowers around them, then they were welcome to stay. 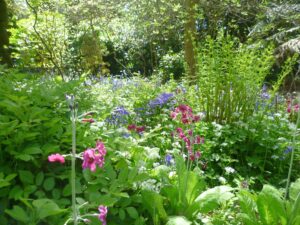 All flowers are welcome

She wanted her gardens to be a source of pleasure and fun. What she was looking for in her planting was a sort colourful exuberance, and an explosion of colour and scents. What’s more, she wanted it all year round. 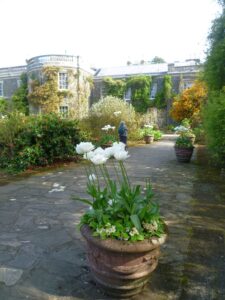 It’s May, and dozens of tulips in terracotta pots celebrate. In the background we can see Mount Stewart House.

She set about acquiring plants from across the globe – the more exotic the better. Mount Stewart is situated on the Ards Peninsula on the east side of Strangford Lough, a sea lough which benefits from the Gulf Stream’s warm current. The other side of the Ards Peninsula faces Scotland and the chilly Irish Sea. The Peninsula itself is a microclimate which allows plants that normally prefer a much warmer climate to flourish. Carefully planted cypresses along the Irish Sea side of the peninsula, shelters the Mount Stewart gardens from Atlantic storms. 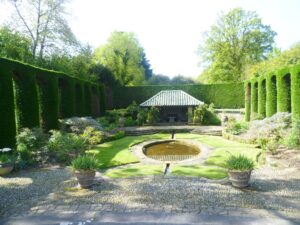 She and her husband visited a lot of famous gardens on the continent which inspired her to create her own versions of what she saw.  Take the Alhambra in Grenada. The gardens of the Generalife are famous for their water features and geometric topiary, and this is echoed in Lady Londonderry’s formally laid out Spanish Garden with its high-sided clipped cypress hedge and central circular pond edged in stone. 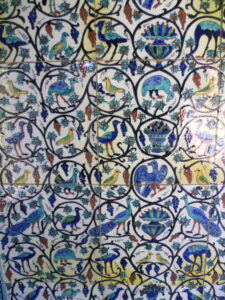 Also facing the house but from a different angle is the Shamrock Garden and here she celebrated the Irish legend of the Red Hand of Ulster which tells the story of two Viking brothers who raced their long ships from the Mull of Kintyre in Scotland to the Antrim Coast. Whichever brother’s hand was the first to touch Irish soil would be king of Ireland. The younger brother, Lobraid, began to fall behind, so he cut off his left hand and threw it onto the beach – and claimed the prize. 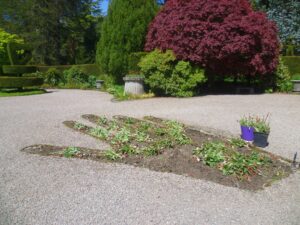 Lobraid’s left hand in the centre of the Shamrock Garden, is always planted with red flowers. The red tulips are over and are about to be replaced by different red flowers.

Also facing Mount Stewart House is the Italian Garden which has a number of tall columns supporting strange creatures – one of which is a gryphon. 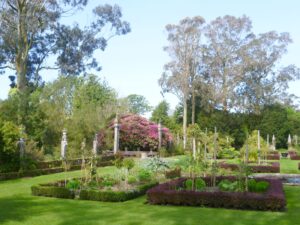 I’m zooming in to look at the gryphon – a legendary creature with the body, tail and back legs of a lion, and the head and wings of an eagle. 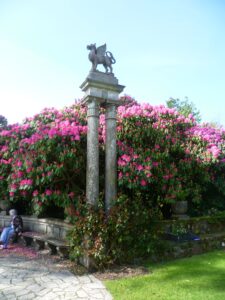 Gryphon was one of the nicknames Lady Londonderry gave her husband – another nickname was Cheetah. Lord Londonderry was known for his womanizing and the nickname ‘Cheetah’ could also signify a man who cheats on his wife, or, like the Gryphon, is a shape-shifter. 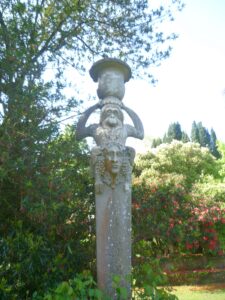 Elsewhere in the Italian Garden there are a number of four-cornered pillars  which support herms, that is, a head, usually of Hermes, the Greek god of boundaries. In Pompeii and elsewhere in Italy, the heads usually have phalluses underneath – symbols of prosperity and good luck. The herms in the Mount Stewart Italian garden have heads representing the god Bacchus, with bunches of grapes around his ears. A baboon/orang-utan-like creature sits on Bacchus’s shoulders with a vase on his head. What on earth does it mean? 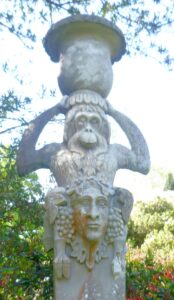 A close-up of a herm. I couldn’t work out if the creature sitting on the god Bacchus’s shoulders was a baboon or an orang-utan.

There is a lot which could be said on the symbolism of the animals in the Mount Stewart Gardens but I shan’t attempt to do so in this blog. Today, I’m concentrating on Lady Londonderry as a cultured woman with a vivid imagination and great artistic sensibility, not to mention an eye for colour and a sense of fun.

Take the Mairi Garden, inspired by her youngest daughter, Mairi. 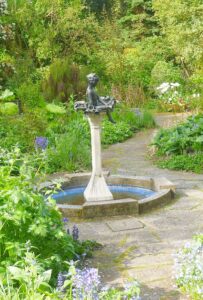 Here Mairi is a child sitting in the middle of fountain surrounded by the ‘silver bells and cockleshells’ of the nursery rhyme ‘Mary, Mary, quite contrary, How does your garden grow?’ You can hear the water in the fountain trickling through the silver bells and cockle shells’. It’s an enchanted place – with a completely different vibe from the other garden areas. The child Mairi/Mary might have had her ‘contrary’ moments but she was obviously a much loved child. 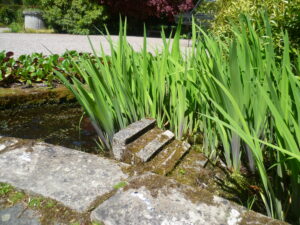 I was very taken by these steps, built especially to help green terrapins climb out of the pond safely.

Lady Londonderry had many sides to her; one of them was her important role as a political hostess but I am not going to look at that today. I’m going to end with a couple of photos showing other parts of the estate  – there are many lovely walks. 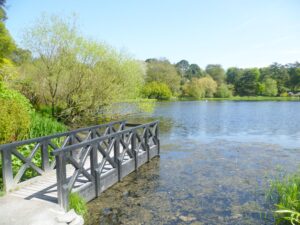 A landing stage for the lake.

Walking round the lake takes about an hour. There are white swans to admire and red squirrels in the woods. 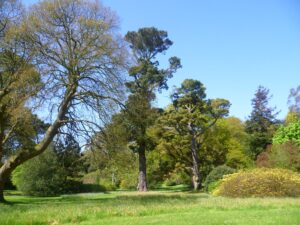 Lady Londonderry loved trees – the bigger the better, and there are some magnificent eucalyptuses and huge cypresses which were specially planted to help shield the gardens from the wild weather coming in from the Irish Sea.

I hope you have enjoyed this little tour of some of the delights that Mount Stewart has to offer. And I haven’t even started on the house – or Lady Londonderry as political hostess….