Ever since Roman times, the rich and powerful have built villas in the hills surrounding Rome to escape the summer’s heat. Some, like Hadrian’s villa at Tivoli, still survive. Others, like Castel Gandolfo, built in the 17th century for Pope Urban VIII as a summer palace, were built on top of Roman villa sites. And why not? The land was already levelled and useful top quality building material was there for the taking. 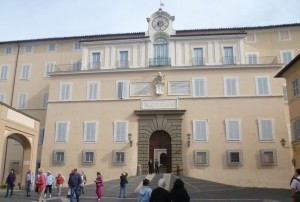 The papal estate at Castel Gandolfo is a shaped liked a thin slice of pie with the popes’ summer palace at the pointed end (Pope Benedict still uses it). About half way down the slice, stand the Barberini Gardens, built over the remains of the Emperor Domitian’s summer palace. In fact, elements of Domitian’s palace have been incorporated into the 17th century gardens themselves. 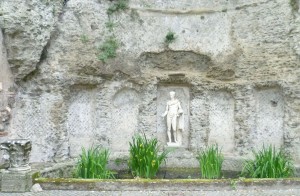 Indoor rooms, for example, have been turned into nympheums with statues and water features. It’s strange to think that this nympheum, now outside, may once have been a Roman room indoors. The Roman statue is a male nude, possibly the god Apollo. 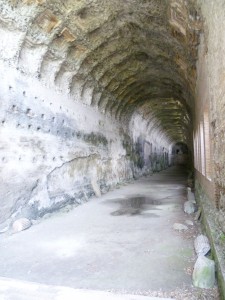 Domitian’s massive cryptoporticus – a tunnel with side openings instead of columns – was built both as a shelter from the sun and as a means of getting from one part of the palace to another. The side openings meant that it was well lit. (During World War II, it was used as a civilian air raid shelter.) As a fan of Lindsey Davis’s Falco and Flavia Albia series, I enjoyed seeing the psychopathically suspicious Domitian’s cryptoporticus and it wasn’t difficult to imagine all sorts of evil being plotted in that cavernous and rather creepy space. 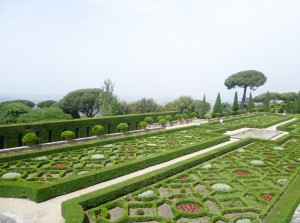 The gardens are on two levels. Here you can see the formal lower garden with the little box hedges and geometric shapes. We know that the 17th century garden designers turned some of the corridors from Domitian’s palace into garden paths and there is a possible ex-Roman corridor running up the centre. 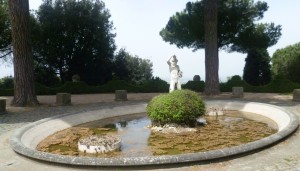 Fountain with statue of Bacchus

I was struck with how pagan the gardens are, with its statues of Roman gods and goddesses. The fountain above, for example, has a statue of Bacchus, the god of wine. He has a wine jug tucked under one arm and a wreath of vine leaves in his hair. He wears a fig leaf but nothing else. It doesn’t seem very appropriate for a papal garden.

And then I googled Pope Urban VIII, born Matteo Barberini, who built the gardens. He was a man of ‘graceful and aristocratic bearing and exquisite taste’, according to a Venetian envoy. He was, amongst other things, a patron of the arts: the hot-tempered Caravaggio (who later had to flee Rome to avoid a murder charge) painted his portrait; the brilliant Bernini sculpted him. I realized immediately that a few scantily clad Classical statues wouldn’t worry him. 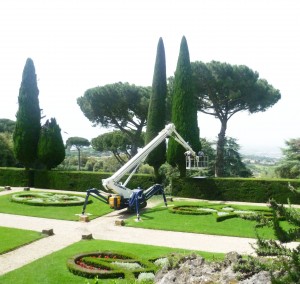 I always enjoy seeing people going about their ordinary work, especially in famous places, so I was delighted to see two men up aloft, trimming cypress trees. The crane lifting them looked like some futuristic monster with its splayed-out legs. I wanted to see it how it moved – did it walk? – but, alas, it stayed put. 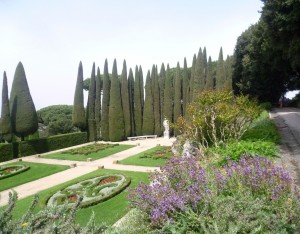 End of formal garden with statue of goddess

Beyond the men, the formal garden came to an end, marked by a row of cypresses standing close together like skittles and, in front of them, a statue of a goddess with floaty robes. 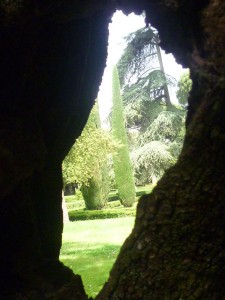 Some of the trees were extremely old, like this olive tree with a huge hole in it. Old enough to have seen Pope Urban VIII, I wondered. I couldn’t resist this photo. 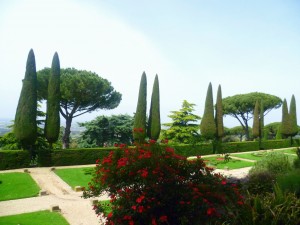 Looking out through the trees to the landscape beyond

My last photo looks back over the gardens towards Rome with the elegantly-trimmed pairs of cypresses and the umbrella pines and the dark red bush in the foreground. The gardens have only been open to the public since 2014, thanks to Pope Francis. And I do thank him. It was a fascinating visit. I loved learning its history and seeing bits of Domitian’s palace. The gardens themselves are beautiful, and I  enjoyed watching the tree-trimmers keeping the place in tip-top condition.

It was turning into a hot day, so we left the Barberini Gardens and returned to the square below the Castel Gandolfo, sat down under the umbrellas outside a café and had the delicious ice-cream/ coffee/ beer of our choice.