Sometimes, what attracts me to a place is simple aesthetic pleasure; I just like the look of it. Take Kakopetria, a traditional stone village in the foothills of the Troodos mountains in southern Cyprus. 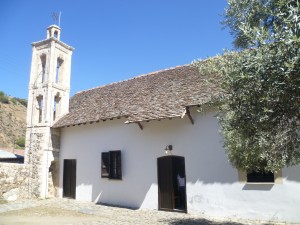 The old church with its steeply-pitched roof

There’s nothing grand about it; it’s been there for ever and it’s remained much as it always was. I don’t doubt that the Cypriot Tourist Board has done some restoration but their work hasn’t been intrusive. They may have whitewashed it – several years ago; but real people live here, hang up their washing on the wooden balconies, and chat in doorways. 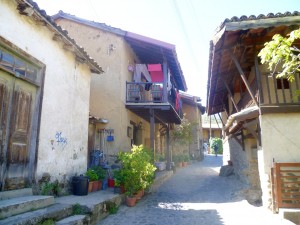 In the photo above, you can see some graffiti on the wall: someone’s initials, a political slogan? Who knows? I rather like the fact that nobody has seen fit to get rid of it. In the gap between the two houses on the left, there are a number of modern brooms (incongruously blue) hanging on the outside wall and, above, a cyclamen-pink towel and a pale blue pair of trousers hang on a washing-line strung across the balcony. The roof tiles jut right out over the balconies which must make walking up the cobbled street in wet weather less hazardous. 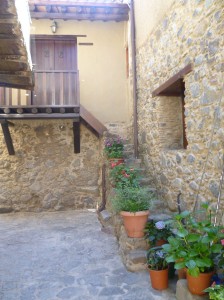 Courtyard with flowers in pots

I peered into a courtyard and admired the flowers (pink, red and dusky blue) in terracotta pots. At the back, stone steps went up to the wooden door on the upper floor. The plants drew one’s eye into the courtyard towards those steps. It made a very pleasing picture. 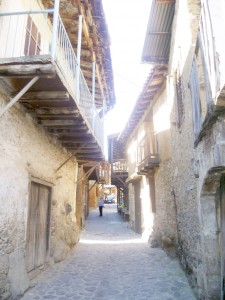 Another street leading up the hill

I followed another street going up the hill. Half way up the street, the balconies almost meet; a villager could share a drink with a neighbour – or snatch a kiss – across the gap. It’s a friendly place, a woman with a bucket smiled as me as I walked past. I noticed that a stretch of roof was corrugated iron rather than tiled which, somehow, gave the village a lived-in look. Money might have been spent on restoring Kakopetria initially but now they are on their own. 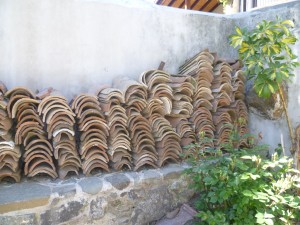 Tiles in the church courtyard

When I reached the little church, I went into its courtyard. In one corner, there was a whitewashed wall, now the colour of fog, and the wide stone ledge in front of it was piled high (somewhat precariously) with terracotta tiles. I counted them; there were well over a hundred. They looked as if they’d been there for some time – there was no evidence of building work. Perhaps the priest realized just how decorative they looked against the whitey-grey background with the greenery in the foreground, and left them there for visitors to admire.

Cyprus has some wonderful archaeological sites, beautifully-frescoed Byzantine churches and fascinating artefacts in various museums but, for me, Kakopetria’s down to earth charm holds its own with any of them.