This week I’m following up on  the blog I wrote a couple of weeks ago about the murder in Canterbury Cathedral of the Archbishop of Canterbury, Thomas Becket, in 1170. I looked at how the relationship between King Henry II and his former Lord Chancellor, which had once been so close, turned to bitterness and hatred, and ended in Becket’s violent death in front of the High Altar. The murdered Becket swiftly became a martyr and a saint – and, almost immediately, miracle cures, ascribed to Becket, were recorded. 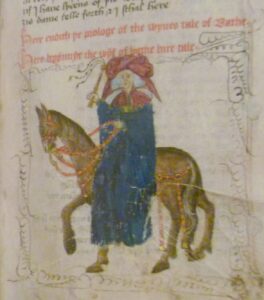 Chaucer’s ‘Wife of Bath’ on Pilgrimage to Canterbury c. 1387

Basically, Becket’s murder was about who ruled England – Church or State? Henry II wanted churchmen who had committed crimes to be tried in secular courts – courts over which he, as King, would have control. The Church insisted that priests be tried in ecclesiastical courts. 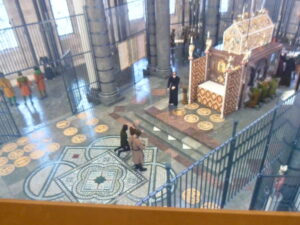 St Thomas Becket’s shrine, as it would have looked.

The murder of Becket, the Archbishop of Canterbury, was a definite victory for the Church. King Henry was forced to undergo a humiliating public penance. The Church was quick to capitalize on Becket’s death:  he was canonized in 1173 and, in 1174, given a sumptuous shrine with a chapel made of rose-pink marble, and his body placed high up in a golden casket which everyone could see. Very swiftly, his tomb became one of the ‘must do’ pilgrimages in Catholic Europe – and one of the richest, as pilgrims, both high and low, left offerings, of money, wine, jewels, and precious objects. 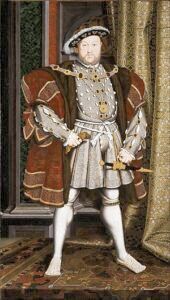 But the story of what happened after that is equally interesting. Nearly four centuries later, King Henry VIII (1491-1547) found himself in a similarly bitter conflict between church and state, one which again ended in bloody executions. 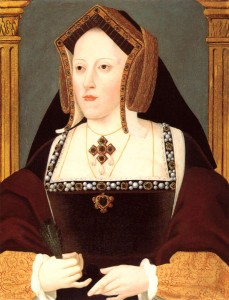 As a young man, Henry VIII had himself been on pilgrimage to Canterbury at least five times. His wife, Katherine of Aragon, a popular queen, owned an ivory cup which had once belonged to Becket himself. She had it encased in a silver-gilt mount, decorated with pearls, gems and her personal emblem, the pomegranate. The relic obviously meant a lot to her. 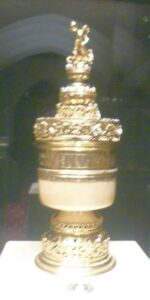 Ivory cup, once owned by Becket, encased in silver-gilt mount with pearl and gems by Katherine of Aragon

Katherine had been a good wife to Henry – except in that vital matter of producing a son and heir. Poor Katherine, in fact, had had 6 children, but only one daughter, Mary, survived; her sons all died soon after birth or were stillborn. Henry wanted a divorce; Katherine didn’t,

The man who mattered in the late 1520s was Katherine’s uncle, the Emperor Charles V, who succeeded not only to the Spanish kingdoms after the deaths of Katherine’s parents,  but also to a huge continental empire embracing the Low Countries, most of Central Europe, and much of Italy.  It was Charles’s army which carried out the Sack of Rome in 1527 and in effect put the pope (Clement VII) in his pocket.  To end his marriage to Katherine, Henry VIII needed a dispensation declaring it null and void, something only the pope could give.  In normal circumstances Clement might well have tried to oblige Henry, but he was now effectively an imperial prisoner, and  Charles was not prepared to have his aunt Katherine humiliated by a second rank monarch like the king of England, and was in a position to ensure that no dispensation was forthcoming.

Henry’s desperation for a divorce became known as ‘The King’s Great Matter’. He began an affair with the Protestant Lady Anne Boleyn – who became pregnant. Anne’s religious sympathies were with the Protestant Reformation, a radical movement which criticised the Roman Catholic veneration of saints, the going on pilgrimages, and other excesses of the Roman Catholic Church who, it argued, were more interested in money and good living than they were in following Jesus’s example of poverty and helping the poor. 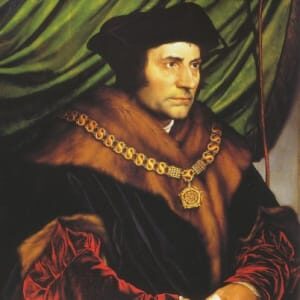 This new critical viewpoint, was exactly what Henry needed to tip the balance between Church and State in his favour. He set his councillors to work, including his Lord Chancellor, Sir Thomas More, to find him a way out of his marriage. He wanted a divorce, and soon. Henry wanted the case to be heard in London; Katherine insisted that it be heard in Rome.

Eventually Katherine managed to outwit her husband. By late July 1529 she had appealed to the pope against her judges and the case had been ‘advoked’ to Rome. This humiliating setback for Henry was a crucial moment of his reign.

At this point I want to introduce you to a new player: William Warham, Archbishop of Canterbury. Most of us only know him from his magnificent portrait by Holbein (above).  But he has a full entry in the Dictionary of National Biography, which shows how he was deeply devoted to Thomas Becket, and how he slowly moved from being a somewhat ineffectual archbishop to someone who, inspired by the memory of Becket, was finally prepared to put his life on the line and defy Henry VIII’s demand to be recognized as head of the Church in England, by adding, crucially, that he would only do so `as far as the law of Christ allows’ – in effect, `No’.

Warham was promptly, and absurdly, accused of the offence known as misprision of treason, which did not carry the death penalty but still meant very serious trouble for anyone convicted of it.  Nonetheless, Warham prepared a hard-hitting speech in his own defence, one which referred back directly to Becket’s conflict with Henry II. ‘The case that I am put to trouble for is one of the articles that Saint Thomas of Canterbury died for’, he declared, quoting from a contemporary life and Becket’s letters. He, Warham, had done no wrong. Rather, he had acted in obedience to Rome, and in accordance with his duty as primate. …

At the beginning of this post, I wanted to show how Becket’s murder cast a long shadow. And with my discovery of Archbishop Warham’s defiance, well over 300 years later, I feel vindicated.

Fortunately for Warham, when he died in 1532, he was well into his eighties. He was buried in his chosen tomb, near to the tomb of Thomas Becket, as  he had wanted.

To succeed him, Henry appointed the reform-minded Thomas Cranmer as archbishop, and thereafter things went as he wanted. In 1534, the King broke with Rome and was appointed Supreme Head of the Church of England – thanks mainly to his Lord Chamberlain, Thomas Cromwell who made a clean sweep and demolished Becket’s former status as a defender of Church liberty. Becket was denounced as a traitor, and in September 1538, Becket’s shrine was stripped of its gold and jewels, and broken up, an act copied throughout the land as Catholic monasteries and shrines were demolished – and money poured into the King’s coffers. 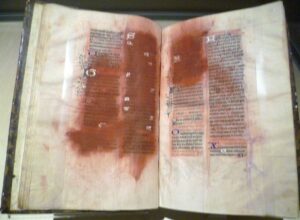 Book with prayers to St Thomas, smeared with red ink (on the King’s order) from church of St John the Baptist, Bromsgrove, Worcestershire

The King, who had once been Thomas Becket’s ardent follower, now hated him so much that he forbade any priest to christen a baby boy ‘Thomas’. (It had been one of the top three boys’ names along with John and William.)

This time, the blood count was much higher; and coincidentally, many of the victims were called Thomas. One of whom, was Henry’s Lord Chancellor, Sir Thomas More, who refused to swear an oath to the Act of Succession which said that Henry’s marriage to Anne Boleyn was valid – which meant denying Papal supremacy. More, himself a Catholic, was a humanist, a man of wit and scholarship, and much loved across Europe. 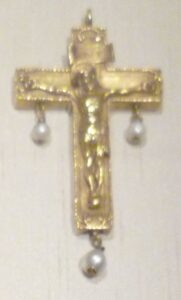 Gold crucifix with hanging pearls, once owned by Becket

More, himself, had a number of relics which had once belonged to Thomas Becket. The fine gold crucifix decorated with hanging pearls above is one example.

More’s traitor’s execution of hanging, drawing and quartering was commuted to beheading, in respect for his position as Lord Chancellor; though it must have been obvious to the King that condemnation of More’s execution in 1535 would be widespread. – as indeed it was. Many people in Europe expressed the view that ‘More’s example would inspire future generations’. 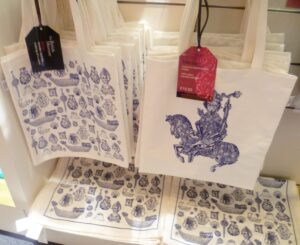 It is with a certain irony that one notices that the British Museum shop is full of Thomas Becket memorabilia: ranging from tea-towels and tote bags to various badges. It’s an exhibition well worth seeing.

More himself was well aware that his personal link to the martyr Thomas Becket would be noted. And the current exhibition on the murder of Thomas Becket itself makes a point of emphasizing the  link between Becket’s martyrdom and subsequent political movements which demand Freedom and oppose Tyranny. Sooner or later, Becket’s name will come up, and Thomas More’s. Freedom will always be vulnerable to unscrupulous and ambitious people.

I am delighted to welcome my 6th Elizabeth Hawksley e-book: ‘Crossing the Tamar’