Back in the 1950s, my mother found herself kitting out a small modern London flat from scratch. She decided to go for modern and went straight to Heals, the place for the best modern furniture and fittings. Once she’d bought the essentials, she decided that the flat (bedroom, sitting-room, bathroom, small kitchen, and a small entrance area) needed a few ornaments. At the time, Mr Heal prided himself on buying top quality items from across the world to sell in his famous shop. 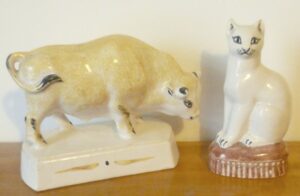 Fast forward about 70 years and I now own six of the objects that were once in that small London flat. 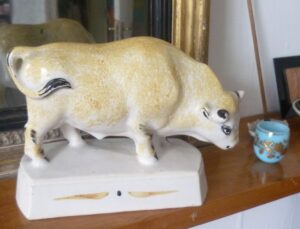 I’ve always liked this bull; it’s very tactile and, somehow, the bull manages to get across bulk as well as bovine grace. I like the way the tail is moving – to flick away a fly, perhaps. There’s a touch of film star about the eyes with the mascaraed eyelashes but only a touch. 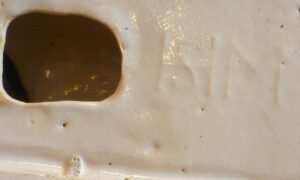 The marks underneath the bull – the H/S M signature. Note the way that the capital H has a capital S inside it – and the capital M. What does it stand for? 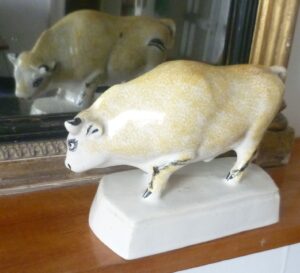 Pottery bull from the other side

I photographed it from the other side and managed to catch it admiring its own reflection in the glass. 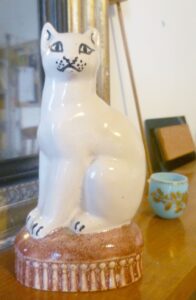 I think this cat is charming and the marks underneath are exactly the same H/S and M, so the same potter must have created it. It, too, has slightly slanting film star eyes and a black apostrophe sets off the inside of each ear – The cat looks female to me. The back view is, frankly, a bit dull and featureless. Her tail curls gently up her back but that’s it. I took several photos but, eventually, decided that the post didn’t need it. 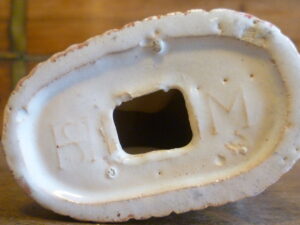 The marks underneath the cat

The marks underneath are the same as the bull’s marks: H, with a slightly smaller S inside it, and an M. It’s impossible to type H with an S inside it, which makes googling it impossible. 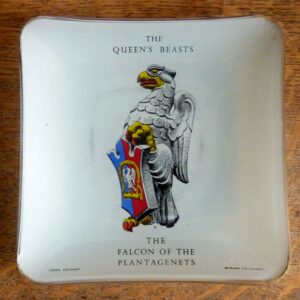 THE QUEEN’S BEASTS: THE FALCON OF THE PLANTAGENETS

This is made of opaque glass with a gold rim and gently-rounded corners. It may be an ashtray – it was made in the 1950s when ashtrays were ubiquitous – but, fortunately, there are no cigarette burns.

At the bottom left it reads: CROWN COPYRIGHT and on the right: GEORAMA  LTD  LONDON . I googled Georama and eventually discovered that they had produced three ‘dragon glass plates’ of the Queen’s Beasts in the 1950s. And that they are now ‘Vintage’.

I know exactly why my mother chose this. She was a staunch Ricardian (supporter of King Richard III) and it was the ‘Plantagenet’ bit that appealed. I clearly remember visiting Beverley Minster in Yorkshire with her when she suddenly said in her clear voice, ‘I shan’t be a moment, darling, I just want to spit on the tomb of Lord Percy!’ And stalked off.

Henry Percy, 4th Earl of Northumberland was infamous amongst Ricardians for not supporting Richard III at the Battle of Bosworth in 1485. The Earl’s defection was a factor in causing Richard to lose both the battle and his life; and it changed the course of English history. A few years later, in 1489, Lord Percy was murdered (it was said in retaliation for his betrayal of Richard) by a vengeful mob whilst trying to collect taxes for King Henry VII. ‘And serve him right!’ said my mother as she came back from the Percy tomb. 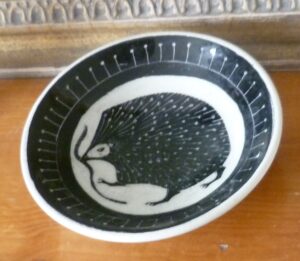 Hedgehog with worm by David and Hermia Boyd (10 cms)

The last three items are small bowls by David (1924-2011) and Hermia Boyd (1931-2000). The Boyds were Australian born; and they travelled widely in both Europe and the UK. In the 1950s, they established a pottery in London, which may be where Mr Heal discovered them. Their ceramics often used ‘finely decorated sgraffito techniques and mediaeval imagery.’ 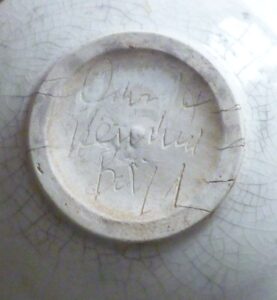 Underneath the hedgehog and worm

I love the hedgehog above – it’s very hedgehog-y ; I did wonder about whether hedgehogs lived in Australia but having found a brief biography of the Boyds, I can see that they might well have seen them during their frequent travels in the UK and Europe.

The underneath of the hedgehog bowl is very crackled. I wondered if it were a ‘second’ – and that would be typical of my mother, too. She loved a bargain. 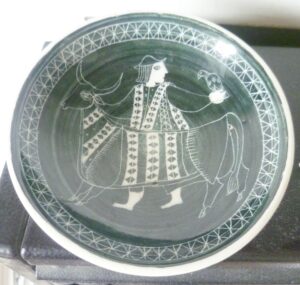 Man with Bull and holding a small bird of prey – possibly a merlin: (10cms)

I particularly like this slightly mysterious ceramic bowl. The mediaeval man with his straight cut hair and mediaeval cap is wearing what looks like a long tabard decorated in exactly the same way as the bull. Is he wearing some sort of bull costume? There’s a story there but it has yet to reveal itself.

But I can quite see why my mother liked it. She became very interested in archaeology, and every summer she would dig at a mediaeval deserted village called Wharram Percy, (or ‘scrubbing up the floor’ as my father put it). So I think it was the ‘mediaeval’ touch about the little bowl that appealed to her. 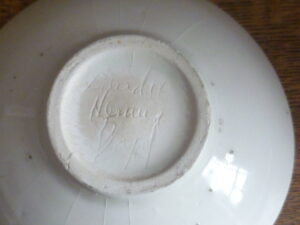 Underneath the Man and Bull bowl

I love the mediaeval imagery and I’d love to know more about what it meant to the Boyds – and about the Boyds themselves, for that matter.

I had some difficulty photographing the bowls, it was something to do with the curve of the bowl. It wasn’t easy to capture the blackness of the background in the hedgehog and the man plus bull bowls. I managed, eventually, to capture the hedgehog bowl all right, but the man plus bull bowl has come out lighter that it is in reality. But when I darkened it, the outline of the bull almost disappeared. 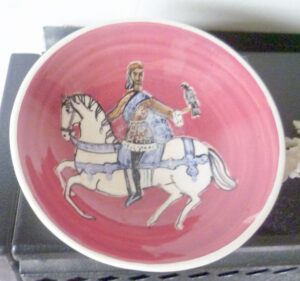 The Falconer on a White Horse bowl (11 cms.)

Again, I wrestled with the photograph; I wanted to capture the pink of the background as accurately as I could. This bowl reminds me very much of mediaeval tapestries, particularly the spirited horse. The horseman is riding without stirrups. And the rider is obviously proud of both his horsemanship and his falconry. 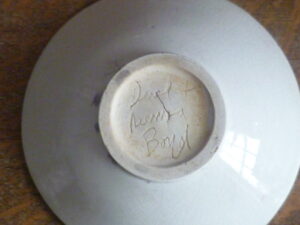 Underneath the Falconer bowl

The signature underneath is one of the clearest I have. I must confess that, until I came to write this post, I hadn’t been able to decipher the writing underneath the bowls – even with a magnifying glass. It would never have occurred to me that the H scrawl – which I had interpreted as Herring? Hemming? Was actually Hermia!  When I taught A Midsummer Night’s Dream many years ago, I had great trouble convincing my students that the ‘Hermia’ in the play wasn’t called ‘Hernia!’ – which they thought was hilarious!

Well, there we are. I think that my mother had an excellent eye for interesting ceramics, and I’m delighted that these pieces are now mine.

I’m delighted that my sixth Elizabeth Hawksley ‘Crossing the Tamar’  is now out in e-books.