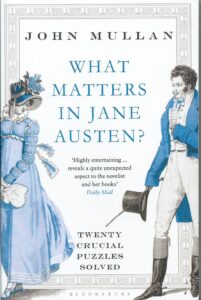 Take Chapter 22 where Charlotte Lucas decides to make a bid for Mr Collins. Elizabeth is grateful to Charlotte for ‘being so kind as to listen to Mr Collins’. Charlotte replies that she is happy to have been useful to her friend.

This was very amiable; but Charlotte’s kindness extended further than Elizabeth had any conception of: – its object was nothing less than to secure her (Elizabeth) from any return of Mr Collins’s addresses, by engaging them towards herself. Such was Miss Lucas’s scheme …’

John Mullan points out that Jane Austen can ‘refer to a character formally and informally in the same stretch of narrative’ and that this can subtly alter the reader’s sympathy towards that character. In the example above, when Jane Austen refers to Charlotte by her first name, we sense that she is sympathetic towards Charlotte’s difficult position: she’s not pretty, she’s now in her late twenties, and she has no money. Her future looks bleak. But when she refers to Charlotte as ‘Miss Lucas’ she is drawing the readers’ attention to Charlotte’s mercenary motives by taking a step backwards, as it were, in her use of a more formal register. 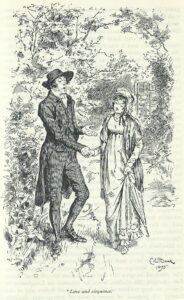 However, I don’t want to look at this with regard to Jane Austen’s novels alone. (John Mullan’s book is so brilliant, I urge you to read it for yourselves) I want to look at how Georgette Heyer uses a similar technique and I wondered whether she, too, is illuminating a similar subtle shift in how she views the characters.

I’d like to start begin with the last scene in The Grand Sophy where our hero, Charles Rivenhall, comes on stage, having driven from London to Lacy Manor. He is in a temper. He has learnt, in a letter from his tiresomely interfering fiancée, Eugenia Wraxham, that his cousin Sophy Stanton-Lacy has been driven to her family home, Lacy Manor, unchaperoned, by the eligible Lord Charlbury. (Charles is now aware that he loves Sophy.) Eugenia and Charles’s sister, Cecilia, have followed the couple; Eugenia at least is intent on saving Sophy’s reputation which, she imagines, will show Charles how superior her moral tone is – and how unworthy Sophy is. Cecilia, who loves Lord Charlbury herself, has different feelings. 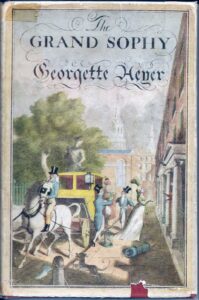 The Grand Sophy by Georgette Heyer

We note that Charles and Eugenia are on first name terms – they are engaged, after all. But in, Heyer herself, as narrator, always refers to Eugenia as Miss Wraxham, and to Charles as Mr Rivenhall.

At Stanton Lacy, Charles and Eugenia have a furious row which ends with Eugenia breaking off their engagement and, from then on, he calls her ‘ma’am,’ and she addresses him as ‘sir’. It’s as if they have both become anonymous to each other. When Charles next refers to Eugenia it is to tell Sophy, ‘Miss Wraxham has terminated out engagement.’ Note the formality.

But what I find really interesting is the last line in the book. Charles has asked Sophy to marry him and she has accepted. He’ll take her back to London at once – staying would be awkward for them both.

Sophy cries, ‘Did you come in your curricle? What if it should begin to rain again? I shall be drenched!’

‘Then you will be well-served,’ retorted her unchivalrous cousin.

Mr Rivenhall pulled the door to behind them, and in a very rough fashion jerked her into his arms, and kissed her. ‘I don’t, I dislike you excessively,’ he said savagely.

Entranced by these lover-like words, Miss Stanton-Lacy returned his embrace with fervour, and meekly allowed herself to be led off to the stables.

Why has Georgette Heyer decided now, at the very end of the book, to use the formal ‘Miss Stanton-Lacy’ rather than ‘Sophy’?

I know I’m not the only person to think that The Grand Sophy ends too abruptly. There is something important that Charles needs to acknowledge. Sophy had, unknown to Charles, come up with an outrageous plan designed to shake Miss Wraxham out of her comfort zone far enough to push her into breaking off her engagement to Charles – something she, as a lady of impeccable breeding, would never do. And it worked. 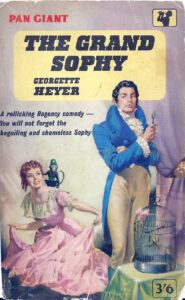 Charles has gradually come to understand Miss Wraxham’s true character and he now knows that he dislikes her narrow-mindedness and that, if they were to marry, he would face a lifetime of regret and unhappiness. He also knows that he is in love with Sophy, andjust how much Sophy has done for his family: it is thanks to Sophy that Cecilia is now happily engaged to Lord Charlbury, and his younger brother Hubert has been rescued from a loan shark. And Sophy has manœuvered Miss Wraxham into breaking off their engagement.

He owes Sophy a huge debt of thanks. OK, they have exchanged kisses and she has agreed to marry him, but he hasn’t told her – not really – how much he loves her. In my view it’s not a satisfying ending. The only clue we have that Georgette Heyer may agree, is that she uses Sophy’s formal name (Miss Stanton-Lacy) for the only time in the final scene, which may hint at the omission – Charles doesn’t yet deserve to call Sophy by her first name. 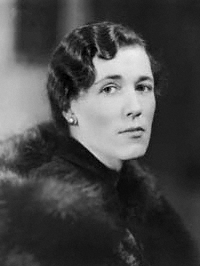 I’d now like to look at the ending of Georgette Heyer’s Cotillion. The book ends with one of Heyer’s brilliantly outrageous comic scenes where all the major characters either come good or get their comeuppance. What is interesting, from the point of view of how Heyer refers to Kitty is that in Chapter 19, which mainly concerns the wrapping up of the story of the simple-minded Lord Dolphington and the plain, dowerlesss but sympathetic Miss Plymstock who are trying to get married against strong family disapproval, Kitty is referred to as ‘Kitty’ (rather than Miss Charing) by the author. It’s, perhaps, a way of letting the readers know that, at this point, Kitty is not the main character.

Kitty is there to support Dolph and Hannah but she has made one disastrous mistake: she didn’t realize that Dolph and Hannah would need a special marriage licence – and without the licence, they can’t get married. 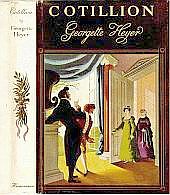 Cover of Cotillion by Georgette Heyer

In Chapter 20 when the handsome but dangerous Jack Westruther arrives, Heyer still refers to ‘Kitty’ rather than Miss Charing. Kitty was in love with Jack at the beginning of the book, but, surprisingly, she is unaffected by his presence when he turns up with the shocking news that Uncle Matthew – whose fortune Jack hopes to inherit – intends to marry Kitty’s old governess, Miss Fishguard.  The characters all know that Uncle Matthew’s will leaves everything to Kitty – providing that she marries one of her cousins. Jack assumes that Kitty will be as eager as he is to stop his great-uncle’s marriage to Miss Fishguard – but Kitty disagrees; she thinks it’s an excellent idea.

Then the hero, Freddy Standen arrives; for much of the book he has been something of a lightweight character; a fashionable young man about town with impeccable manners but who is not overburdened with brains. But, throughout the book, Freddy gradually becomes a hero. 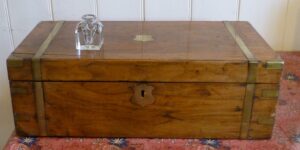 At the end of the book, Freddy arrives with the all-important licence, and this is what happens:

Kitty caught his hand. ‘Freddy, you have not brought one?’ she demanded incredulously.

For the second time in her life, Miss Charing lifted her hand to his cheek. ‘Oh, Freddy, I might have known you would come to our rescue!’ she said in a choked voice.

Suddenly, Heyer switches mode and we note that here Kitty is referred to as Miss Charing. Something has changed. Perhaps Heyer wants us to notice Kitty’s intimate, and affectionate, gesture of lifting her hand to Freddy’s cheek. Kitty may not be entirely aware of what she’s done, but we can be sure that Jack notices it. Jack has always intended to marry Kitty, guessing that Great-Uncle Matthew’s fortune would be left to either him or Kitty – but it would be at a time of his choosing.

The name referral goes back to the informal ‘Kitty’ for a short while but then Freddy – who has been pretending to be engaged to Kitty, informs the company that he thinks Miss Fishguard marrying his great-uncle is an excellent thing: ‘I don’t want that woman living with us, and if she marries my great-uncle, she dashed well can’t!’ 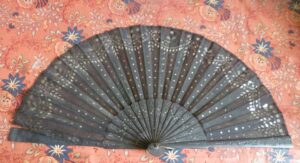 Jack’s reply makes it clear that he is well aware of Kitty’s little game and he immediately tries to change the narrative. He holds out his hands to her but Kitty backs off. For the first time, she lets everyone in the room know the truth:

Miss Charing took a step backwards.’ If you please, Jack, no more.’

Miss Charing swallowed and managed to say: ‘I collect that you mean to ask me to marry you, but – but I beg you will not! If you had come – that day – I should have accepted your offer, which would have been a very great mistake, and makes me so deeply thankful now that you did not come!’

The readers note at once, by the use of ‘Miss Charing’ rather than ‘Kitty’ that Kitty is now speaking in earnest. And Georgette Heyer chooses to refers to ‘Miss Charing’ (with one small exception) until the end of the book. I can’t believe that this isn’t deliberate on Heyer’s part. 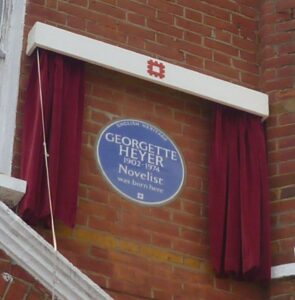 The Blue Plaque newly put up on the house where Georgette Heyer was born, Wimbledon

She means the reader to understand that something has changed – permanently. The love scene at the end is marked by both Freddy and Kitty speaking the truth; Freddy admits that he wants to marry Kitty; Miss Charing admits her wish to make Jack jealous and how stupid she has been; Freddy tells her he loves her, and Miss Charing says that she feels the same. They kiss. Freddy talks of wanting to buy her a set of rubies, and Miss Charing realizes, perhaps for the first time, that marriage means that she and Freddy must learn from each other about what they each want.

As Miss Charing, Kitty is now in a different place; both socially and emotionally.

I confess that until I read John Mullan’s book, I passed over Jane Austen’s use of ‘Miss Lucas’ v. ‘Charlotte’ as being unimportant – or perhaps used for variety. I was wrong; her choices are deliberate and important. And I’m now thinking that I must read Georgette Heyer’s use of a formal or an informal reference to her characters with much more attention.