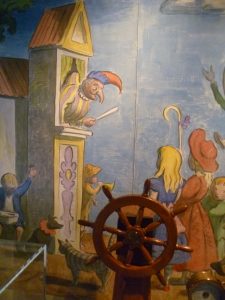 It features nursery rhyme characters. On the left is Mr Punch, who acts as a focus for the various Nursery Rhyme characters. His dog Toby sits quietly on the floor beside the box. Behind Toby, a small boy rushes on, waving his thumb in the air. He is Little Jack Horner, who ‘sat in a corner, eating his Christmas pie. He put in his thumb and pulled out a plum and said, “What a good boy am I.”’ A stripy cat is looking at him.

On the other side of Punch’s box, Little Boy Blue is blowing his horn. (Little Boy Blue, Come blow up your horn, The sheep’s in the meadow, The cow’s in the corn. But where is the boy Who looks after the sheep? He’s under a haycock, Fast asleep.) This Little Boy Blue, we note, is awake and alert.

Little Bo Peep stands in front with her shepherdess’s crook. She has lost her sheep. (Little Bo-Peep has lost her sheep, And can’t tell where to find them. Leave them alone and they’ll come home, Wagging their tails behind them.) But who is the girl in red standing next to her? She can’t be Miss Muffet because she’s not sitting on a tuffet and I can’t see a spider waiting to frighten her. 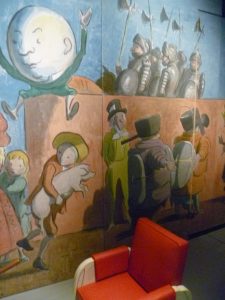 Underneath Humpty, Tom, the piper’s son has just run off with the pig. (Tom, Tom the piper’s son, Stole a pig and away did run.) But who is standing next to him? Could it be the Mad Hatter from Sir John Tenniel’s illustration in Alice in Wonderland? His top hat has a card reading what looks like ‘10/6’. And who are the characters in armour wearing saucepans for helmets?

I enjoyed working out who was who. If anyone reading this knows who the girl in the red dress is, or who the characters wearing saucepan helmets are, or, indeed, where the stripy cat comes from, I’d be glad to know. 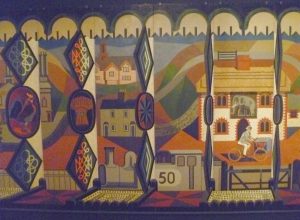 The next artist on my list is Edward Bawden (1903-1989). I already know his tile designs for London Underground, the most famous of which is his cameo silhouette of Queen Victoria’s head on the walls of Victoria underground station. And I like his other work.

But I didn’t know that, in 1949-51, he was commissioned to produce works for the Orient Line. These include murals showing typical English scenes, The English Pub’s panels refer to various popular English pub names: left to right we have: Cock, Wheatsheaf, Star, and possibly, Elephant and Castle. We note that the Elephant’s typically English cottage has a thatched roof. And a boy is cycling past with a box saying Stop Me. Presumably, he is selling ice cream.

In the foreground, a pre-war steam engine puffs past. This is England through rose-coloured spectacles – but charming, all the same. 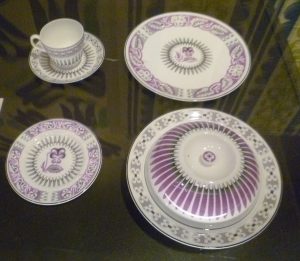 Bawden’s 1955 ceramics for the Orient Line

Bawden also designed ceramics for the Orient Line’s first class dining-rooms, like this elegant tea set from 1952, comprising cup and saucer, small plate, large plate and muffin dish. I had no idea that muffins required special dishes but having a specially-fitted cover makes sense. Muffins need to be kept hot to be enjoyed at their best.

Lastly, there is that controversial artist, Stanley Spencer, (1891-1959). He is best known for his startling paintings depicting Biblical scenes set in the Thames-side village of Cookham, where Spencer lived and worked for much of his life. During World War II, he was a war artist (as were both Ardizzone and Bawden) and in 1941, the British Government commissioned a series of paintings to record the war work done in the Clyde Shipyards. The result was his epic series, Shipbuilding on the Clyde.

Detail from ‘The Riveters’ by Stanley Spencer

Riveting was a highly-skilled, and dangerous, job. The riveters had to join pieces of metal by hammering red hot rivets into the plates, and, for this, they had to crawl inside the hollow steel masts. You can almost hear the banging of the hammers and feel the heat. The above picture has at least eleven men working closely together, and I can’t see any protective clothing; no goggles, helmets or gloves, for example.

Detail 2 from ‘The Riveters’ by Stanley Spencer

This scene is taken from a right angle to the first scene. Here, we can see men at work inside the steel tubes, which are huge. A man crouches inside one and, behind, we can just glimpse his mates, lying down to work. The workspace is also cramped outside the tubes – I can see as least thirteen men working, and much of it involved very high temperatures. I have an awful feeling that accidents must have been common.

Spencer’s restricted palette, in dull orange and shades of grey, get across both the ferocious heat and the sheer strength involved.

The Ocean Liners exhibition is not just about the world of the wealthy, travelling the oceans on board ships which catered to their every whim, there is also an important section on what happened to the liners in wartime. They were stripped and turned over to transporting hundreds of thousands of troops to various war zones, not to mention carrying supplies, as well as war leaders, like Winston Churchill, to vital meetings with their allies.

Whether you are interested in luxury travel, art, interior décor, engineering, or history, this exhibition has much to offer.