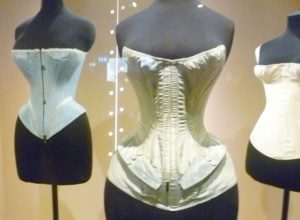 Leigh Hunt, also a friend of the poet, John Keats, wrote in 1830, ‘so rapid are the changes that take place in notions of what is decorous that not only has the word “smock” been displaced by the word “shift” but even that harmless expression has been set aside for the French word “chemise”, and at length not even this word, it seems, is to be mentioned nor the garment itself alluded to, by any decent writer.’ Leigh Hunt, no prude himself, obviously found the excessive primness ridiculous.

Smock, shift or chemise all mean the white linen undergarment women wore next to the skin. Whatever you called it, it was an eminently practical garment. Linen was cheap and hard-wearing; it absorbed sweat, and was easy to wash. Detachable linen collars and cuffs could be removed easily and washed separately. Moreover, a poor woman might sleep in her shift and, in the morning, treat it as an undergarment. 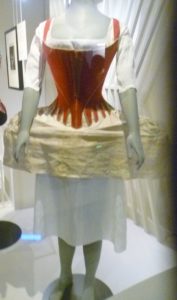 So, what did a woman wear on top of her shift/chemise? We need to begin with the late 18th century to see the garment’s development. The photograph above shows stays and hoop from the 1780s (the white shift shown is a modern replica). They were ordered by a Miss Davis from a London robe maker (stay-making was a skilled occupation). The hoop is made of linen and cane. Women did not wear drawers at this date – and one can see why. The hoop looks very cumbersome – imagine the problems manoeuvring it up and down stairs and squeezing through doorways. To have to cope with all the hassle of dealing with drawers in order to have a pee, would be almost impossible.

The linen shift was, as I’ve said, easily washed, and provided a hygienic barrier between the skin and the top garment, and the stays created a rigid foundation for the gown. The top layer of the stays was made of wool, linen and canvas, and the lining was glazed linen. The glazing, which was non-absorbent, meant that dirt was less likely to stick. The structure was held in place by whalebone. The breasts were flattened rather than supported, and it’s not surprising that actresses in historical roles complain that the stays they are asked to wear are uncomfortable. On the other hand, it gives them an elegant, upright posture, just right for the period. 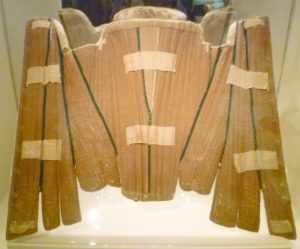 Working woman’s home made stays from the 1760s

We are fortunate that this working woman’s garment has survived, and the owner probably made it herself. The stays are made of wooden busks (slats) padded with wool for comfort, and the lining is cotton. I’ve no idea how the owner put them on but she must, surely, have been able to do so by herself. They look uncomfortable – there’s very little give and take, and bending must have been hell. All the same, the owner was probably very proud of her ingenuity in constructing such a complicated garment.

By 1800, things had changed. The garment above is a completely different animal from the home-made stays of forty years earlier. For a start it’s more delicately-fashioned and, dare I say it, sexier. It’s also made of cotton, linen and whalebone but now there’s silk and lace, too, and there are added gussets to support the breasts. This garment is about enhancement of the female figure, rather than control. It also had a new French name – corset, which incidentally, answers my question at the beginning of this post. Stays were the forerunner of the corset. 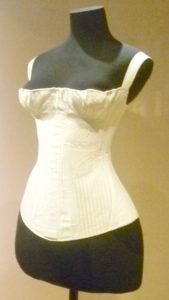 Twenty years later, the corset has moved on again. It is now much more sophisticated. There are quilted gussets to support and lift the breasts which are separated by a central busk (a flat piece of wood) which also flattens the stomach. It laces at the back – so its owner must have had a maid or helpful sister (or lover) to do it up. Gussets over the hips allow for curves. The waist is only 48 cms (19 inches) and I have seen some alarming X-rays showing just what damage a tight corset can do to the internal organs.

Front fastenings of the corset only came in in 1829 and weren’t common until the 1850s. This gives the new 1800 style corset above an extra frisson of interest: it laces up at the back but the decorative front silk lacing hints that, shockingly, it just might undo there, too. (The possibilities here I leave to your imagination.) 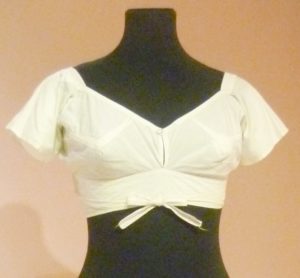 I found this cotton bust bodice especially interesting; it was home-made for a high-waisted dress and it allowed for breast-feeding – you can see the button at the base of the V. It looks astonishingly modern. It also reminds us that married women at this date were, in most cases during the first twenty-five years or so of their marriages, either pregnant or breast-feeding. Jane Austen’s sisters-in-law, Elizabeth and Mary, had, respectively eleven and seven children; Jane herself was one of eight children. The practicalities of the bust bodice were important.

The dressing-gown above is also designed to allow a mother to feed her baby; there are hidden vertical openings down the bust. It’s rare to see a female dressing-gown of this period and I was pleased to see this one; I doubt that a normal dressing-gown would differ much in style. It’s good to know that the young mother still wanted to look becoming and the garment has its share of frills and lace.

The word ‘drawers’ is, according to the O.E. D. ‘of low origin.’  It is defined as ‘a garment for the lower part of the body and legs’ and worn next to the skin. The image above makes it difficult to work out quite how it was worn. Earlier, before the skimpy dresses of the Regency became fashionable, women simply didn’t wear drawers at all. There are a number of late 18th century cartoon prints of ladies falling down, or high winds blowing, which reveal far more female flesh than is seemly – to the delight of passing gentlemen.

However, once the fashionable look, which imitated the classical Greek chiton, came in for ladies, some form of underwear swiftly became a ‘must’.

I loved this simple, yet elegant dress. It is exactly the sort of garment that a daringly fast Georgette Heyer character might wear – Bab Childe in An Infamous Army, for example. It is instantly obvious that it needs a silk petticoat and drawers to make it at all respectable. It is also, surely, best worn by someone young and slim.

Jane Austen’s letters to her sister Cassandra frequently mention the buying of lengths of muslin. For example, on 18th April, 1811, Jane is in London. She writes Cassandra a somewhat incoherent letter:

Lady’s transparent muslin dress from the side, 1810

I am sorry to tell you that I am getting very extravagant & spending all my Money; and, what is worse for you, I have been spending yours too, for in a Linendraper’s shop to which I went for check’d muslin, & for which I was obliged to give seven shillings a yard, I was tempted by a pretty coloured muslin, and bought ten yds of it, on the chance of your liking it; but at the same time if it shd not suit you, you must not think yourself at all obliged to take it; it is only 3/6 pr yd, & I sd not in the least mind keeping the whole.

Given that muslins were fairly see-through, it would be interesting to know when Jane and Cassandra first decided to acquire some drawers. And I’d love to see the dress Jane made with the ‘pretty coloured muslin’, not to mention what she wore underneath!

Photos by Elizabeth Hawksley. The garments are all in the V & A Collection.